Trending
You are at:Home»Vices»Drink of the Week: The Slope 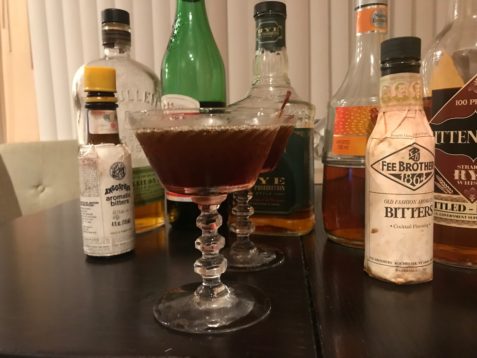 Punt e Mes has long been one of my favorite mixed drink ingredients. An extremely distinctive brand of vermouth, (possibly) blended with other ingredients found in bittersweet amaro liqueurs, with an edge that’s somewhere between coffee and Campari. I’ve had very good luck with it in Manhattans and Americano variations and what not. When I found myself with a large open bottle and a finite time to use it before it began to lose its vermouth mojo, it was time to look for some Punt e Mes cocktails, and that’s how I found the Slope.

It’s a clever variation on a Manhattan that balances the one point of sweetness and half a point of bitter that the Punt e Mes name refers to, against the peppery boozy sweetness of rye whiskey and the fruity out-and-out sweetness of apricot liqueur. It’s the creation of Julie Reiner, at 44 a living legend in the cocktail world as a bartender and bar entrepreneur. We’re told it was named for the Park Slope neighborhood nearby her most famed Clover Club in Brooklyn. That makes sense to me because it’s kind of a homey little number, sweet, very boozy and sharp, but also oddly comforting.

Combine the ingredients in a cocktail shaker or mixing glass. Stir or shake – I lean towards stirring – and strain into a chilled mixing glass. Ponder the travails of becoming a cocktail legend and maybe read this very good article about Julie Reiner while you’re at it.

Reading any of the several variations I’ve found online, it seems clear that everyone has their favorite rye to use with the Slope, its always different. I went with bonded 100 proof Rittenhouse Rye, my old default rye, Bulleit, and value priced Jim Beam. As they say in the the clickbait, my choice will astonish you! Mildly.

Bulleit is a very popular brand for a reason — a good product at a good price — but here it was the least interesting, my syrupy choice. My hunch is that it’s a little too smooth to fight back against all the other strong flavors and the result lacks some bite. On the other hand, I could be completely wrong as Bulleit is Ms. Reiner’s choice.  . Rittenhouse Rye, however, was good though, considering the high proof, by the time you finish it it will probably be your favorite of the bunch regardless of flavor! My actual favorite, though, cheapy Jim Beam, a decent buy, for sure, but definitely a bit crass next to the other brands, it performed admirably with greater bite due to it’s relative lack of aging, though it’s a mere 80 proof. Mildly astonishing!

Finally, this drink works extremely well with the Angostura bitters all the other recipes but mine call for, but I couldn’t resist flouting convention and also using Fee Brothers Aromatic Bitters in some iterations. The more nutty and confectionary flavor makes a very nice alternative that’s worth trying if you’ve got it on hand.

By the way, if you don’t have any rye but you do have bourbon, this drink morphs into something called the Praecocia. I prefer rye in this, but my house guinea pig thought it was smoother with Evan Williams Black Label (the choice of super frugal cocktailians everywhere).