Trending
You are at:Home»Uncategorized»Drink of the Week: The Voyager 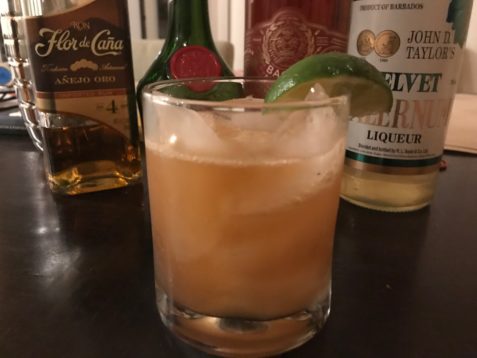 The Voyager was created by Robert “Drink Boy” Hess in the first decade of the century and later featured in his The Essential Bartender’s Guide. You can also seem him make the drink back in 2011 on his video blog. It’s both an homage to classic tiki and, arguably, TV science fiction since Hess chose the name not just because it evoked Polynesian style high-adventure, but also because he’s a Star Trek fan. I like it quite a bit because it’s somewhat less elaborate and less heavy-sweet than most classic concoctions in the Trader Vic’s/Don the Beachcomber tradition. It’s especially nice if you choose the right rum.

Combine the liquid ingredients in a cocktail shaker. Shake very vigorously and strain into a good sized rocks/old fashioned glass filled with fresh ice. Add the lime wedge if you feel like it, and sip. Contemplate the many, many voyages it takes to get a drink like this into your glass. Aside from your possibly West Indian or Latin American rum, your European Benedictine, and the countless spices and herbal ingredients in the falernum and bitters, the things that make the Voyager possible woud have  been science fiction to people in the pre-industrialized world.

****
Hess doesn’t actually specify what type of rum you should use in your Voyager, though he uses something that looks dark or golden on his vlog. You want a rum that’s got some age and some spice to it, but not one that’s got too much heaviness. Meyer’s Dark Rum was a disaster and the light and relatively dry Bacardi Gold only produced a decent drink after I added an additional teaspoon full of superfine sugar. Traditional, sweeter aged rums, do well to amazingly well. Flor de Cana was fine and, though I didn’t have any around this week, Appleton Estate or Bacardi 8 would probably be very good.

Bacardi’s Major Lazer, which I picked up for a ridiculous $10.00, is a limited edition tie-in to an EDM musician I’ve never heard of, because he’s an EDM muscian. It’s nowhere near as good as Bacoo 8 but at the price point it’s not bad; I could say the same thing about the version of the Voyager I made with it.

The best of my Voyager’s featured Bacoo 8, a brand that’s new to me but which is likely to become one of my defaults. On it’s own, it’s both complex and sweet without  being cloying, in the drink, it’s pretty much a tiki party in your mouth — it’s like an exotic candy your grandmother would keep for herself.