Trending
You are at:Home»Vices»Drink of the Week: The Negroni Fizz (DOTW style) 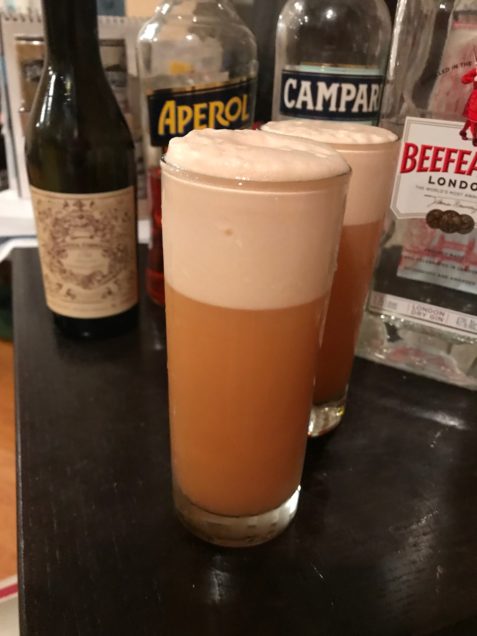 I don’t know about where you live, but here in Greater Los Angeles we’ve been having some brutal weather. Out here in the San Fernando Valley section of Los Angeles, temps have gone north of 112 Farhrenheit. Over the hill in coastal Los Angeles, where temperatures can sometimes be as much as thirty degrees cooler close to the Pacific Ocean, things were only marginally better last weekend, with highs over 100. Worse, we Angelenos are used to having nice cool evenings in the mid-60s to help balance out the heat of the day. Last Friday, though, we had lows in the 80s across town. If you go outside and it’s dark and 90 at 11:00 p.m, that’s Las Vegas or Phoenix, not LA.

All of that is a rather long and depressing way of justifying my ongoin obsession with the venerable fizz genre. It’s been my observation that the combination of a liquor, fruit juice,  egg white, and chilled soda water is pretty much impossible to beat for brain freezing refreshment, and I’ve been starting to wonder why there aren’t more fizz adaptations of classic beverages.

Since, like most cocktail aficionados, I dig a Negroni and the countless Negroni variations that have sprung up over the last 10 years or so, I started to wonder why few had tried applying the classic fizz formula to the Negroni. I found one that went full Ramos Fizz and used heavy cream as well as egg white. I’m sure that could be delicious but I’m not feeling like going up a pants size this week. I found another drink calling itself a Negroni Fizz that sounds nice, but which doesn’t have any egg white in it.

So, this is pretty much my personal, though very simple, adaptation of a Negroni into classic fizz form. Depending on how you make it, a treat for bitters fans or more sweet-toothed booze hounds.

Combine all of the ingredients, except the soda water, in a cocktail shaker. If you’re using cracked egg whites, shake vigorously without ice first. Then add lots of ice and shake it hard for as long as you can stand it. Strain into a chilled highball or Tom Collins glass and top off with an ounce or two of chilled soda water. Allow a moment for the frothy cap of the fizz to separate from the rest of the ingredients. Sip and contemplate all the poor bastards who live before the invention of the A/C.

I had good luck using both Beefeater and Ford’s Gin, a teensy bit less when I emptied my bottle of Hendrick’s of its last remaining ounce. It was fine, but I wasn’t sure it didn’t over-complicate the Negroni Fizz just a bit.  Niolly Pratt sweet vermouth has much less bitterness than Carpano Antica, and both were very good.  As for juice, fresh is always going to be better, but the night I forgot to buy oranges and only had some “not from concentrate” stuff around, the fizz turned out just fine. It also turned out pretty okay when I forgot to put egg white in it!

It won’t surprise any knowledgeable drinker, however, that the huge difference here is between enormously bitter, enormously sweet Campari and it’s kinder, gentler cousin, Aperol. My in-house guinea pig, still not quite an inductee into the cocktailian siblinghood, just wasn’t having the version I made with Campari but he was just fine with the Aperol variation. I enjoyed both versions, but in different ways. If you know for a fact that you prefer sweeter or more bitter flavors, your choice is pretty clear.