Trending
You are at:Home»Vices»Drink of the Week: TCM Fest 2018 Salute #4 – Animal House 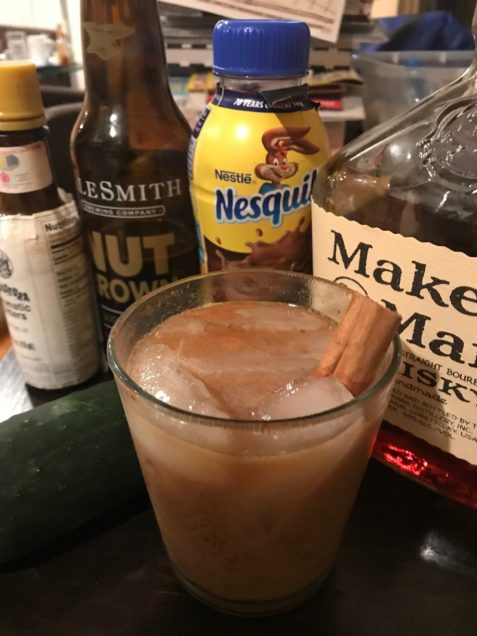 This will be the last of my liquid salutes to the films of this year’s TCM Fest. Sorry to spoil your day.

Anyhow, 1978’s “Animal House” is one TCMFest film that pretty much forces me to base a drink on it. After all, give or take a little marijuana, the movie is driven by beer, cheap whiskey, and horrifically misdirected testosterone. Directed by John Landis and scripted by comedy demi-gods Doug Kenney and Harold Ramis, this seminal tale of (relatively) virtuous scummy frat boys versus evil well-groomed frat boys in the early 1960s, starred tragic SNL legend John Belushi and a cast mostly comprised of newcomers, including Kevin Bacon in an amusingly minor role. Director Landis cannily cut most of Belushi’s lines, forcing him to make full use of his gift for pantomime and leading to one of the funniest performances ever put on film.

I could go on and on about “Animal House” aka “National Lampoon’s Animal House,” and, that’s the problem. The influence and importance of this extremely silly, taboo-breaking inducer of serious R-rated belly laughs is so absurdly vast that, after several attempt to summarize it in a paragraph or two, I’m giving up. So, here, have some Wikipedia, if you want. You can also read this poignant remembrance of an on-set encounter with Mr. Belushi from cinephile blogger extraordinaire Dennis Cozzalio, who worked as an extra on the film when he was a college freshman at the University of Oregon. I should (not?) add that Dennis graciously allowed me to sit inches away from him at this year’s screening. It gives me chills even now

Speaking of chills, here’s  the frosty cocktail I’ve created to try and capture the anarchic spirit of the comedy that launched 10 million toga parties and food fights. Bourbon and beer are the featured players, naturally.

Combine the bourbon, chocolate milk, sweetener and bitters in a double old fashioned glass. Add ice and stir as if you were making a really stupid Old Fashioned. You can add a sprinkle of ground cinnamon at any point. After you’ve stirred, top of with the ale and stir one more time. You can dust the top with some cinnamon if you want, and you also can add a cinnamon stick if you’re got one handy. Sip and contemplate the possibility that your fingernail might contain an entire universe. Perhaps it resembles Whoville.

I know, the nut-brown ale might seem a little high-end and anachronistic. It’s true that, prior to the 1980s, domestic beer was always the same old cheap lager and a microbrew was a thimble full of Bud. However, my first attempt at an Animal House featured Canadian Club, Miller High Life, and a muddled cucumber slice. The Miller was chosen because, along with all the beer, champagne is consumed during the scene where Otter (Tim Matheson) seduces the Dean’s willing wife (Verna Bloom), and we know that Miller is the Champagne of beers. The unlikely veggie would have been a nod to the initial meeting of the campus Lothario and Mrs. Wormer, when an all too Freudian cuke serves as an awkward but apparently effective ice-breaker. It probably won’t surprise you that my first Animal House cocktail was simply goddamn awful and the more I tinkered with it, the worse it got.

So, it was back to the drawing board with a very silly but I hope reasonably tasty combo of an Old Fashioned, a beer flip, and a milk punch. I wouldn’t call it anarchic, I really doubt it will be influential, but I do think this drink both tasty and invigorating.