Trending
You are at:Home»Entertainment»Movies»Movie Review: “Solo: A Star Wars Story” 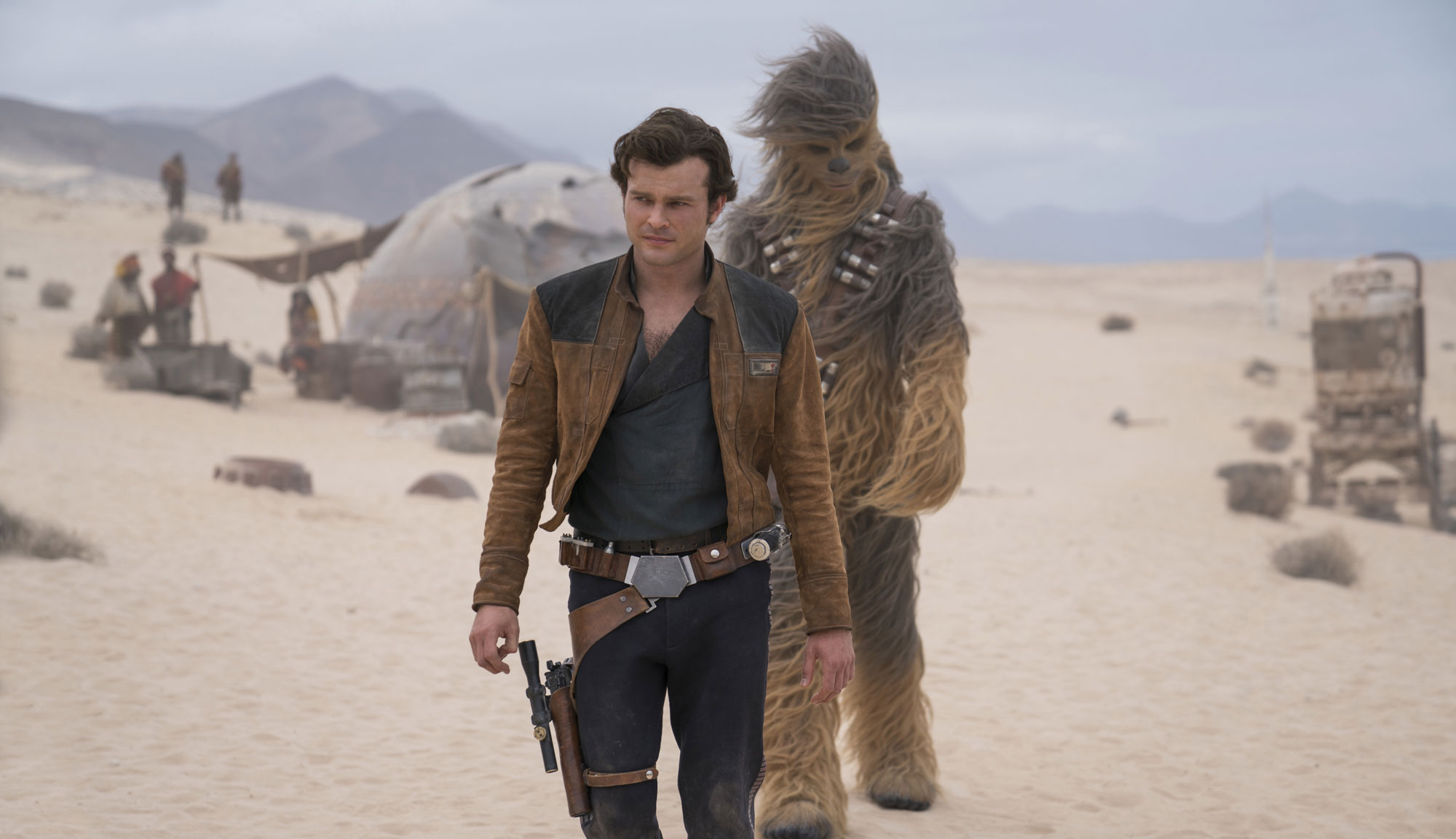 After the ambitious and polarizing “Star Wars: The Last Jedi,” Lucasfilm gets back to basics with “Solo: A Star Wars Story.” Sadly, the Ron Howard-directed origin story lacks the thrills expected from watching a young Han Solo scraping by in the galaxy. The action and scale of the latest Star Wars film are impressive, and there are a few charismatic supporting performances, but Howard’s movie is more often than not an unemotional journey.

Solo’s story is hindered from the start with an introduction that features more fan service than character and personality. Solo (now played by Alden Ehrenreich) gets by as a thief under the direction of an alien criminal named Lady Proxima (Linda Hunt), who also takes advantage of Solo’s childhood friend/lover Qi’ra (Emilia Clarke). The two dream of leaving their dreary planet together, but only Han makes it out when they attempt to escape; the ensuing action scene has a breathless and exciting energy that the rest of the movie doesn’t always capture.

After a quick stint in the Empire’s army, Solo teams up with a grizzled team of robbers led by Beckett (Woody Harrelson) and Val (Thandie Newton). Despite having far less screen time, the chemistry and intimacy between Beckett and Val is more compelling than what screenwriters Lawrence Kasdan and Jonathan Kasdan do with Solo and Qi’ra’s stiff relationship. While Solo was a magnetic presence and a scene-stealer in the original trilogy, he’s surprisingly overshadowed in his origin story by the supporting players. Solo was never the generic leading man type, but he occassionally is in this movie, which is no fault of Ehrenreich’s. The actor has one scene with mobster Dryden Vos (Paul Bettany) – the big bad of the film – where his broad smile, cocky attitude and charm is pure Han Solo. Not for a second is the actor doing an impersonation.

The problem is the filmmakers’ portrayal of Solo. All of the fan service and questions answered demystifies the character, making him a bit less interesting. Redundant details such as how Solo got his famous blaster, for example, add little to the character and the bigger picture and ultimately take away some of the mystery. The broad origin story moments don’t reveal much that’s substantial about Solo, but once he’s doing Vos’ bidding and hanging out with Lando Calrissian (Donald Glover) and his droid co-pilot L3-37 (Phoebe Waller-Bridge), the fan service slows down and the journey picks up speed, although there are still bumps along the way. Glover, Waller-Bridge and Bettany help liven up the aesthetically bleak movie. Bettany doesn’t go too big as the villain, but he finds the right moments to do so, like the character’s wonderfully insulting insincerity when he greets Beckett and his crew.

Bettany is a bright spot in a very dark movie. The recent Star Wars films, even “Rogue One: A Star Wars Story,” have a great deal of color and light. Howard and cinematographer Bradford Young (“Arrival”), however, are interested in the darker side of the Star Wars galaxy and its shadowy characters, so they lay on the shadows thick. With the dark lighting and quick camera moves, there are a couple of jarring and disorientating moments, but Young’s work is more often than not beautiful and tactile, and it grounds the Star Wars universe. The director and his DP keep the camera close to Solo as well, which at times adds a more intimate quality to the action.

“Solo: A Star Wars Story” isn’t without a few exhilarating scenes. There’s a robbery sequence that ranks among Howard’s best work, finding absolute clarity in a sequence with many characters and moving pieces. The scale, the obstacles and the mostly personal stakes are major during this scene. The same praise can be said about a standoff between Solo and another character that is so sparse and suspenseful it’s almost out of a western. It’s one of the only surprises in a movie that plays to fan expectations too often.

In fact, for a franchise famous for its bombshell revelations, it’s strange that “Solo: A Star Wars Story” is lacking in that department. There are a few major turn of events, but they’re generally weightless, mostly because the central relationship is so cold, especially when Carrie Fisher’s Princess Leia comes to mind. Solo and Qi’ra’s relationship is a major part of the movie, but it’s never fully convincing and quickly takes a backseat to other, more compelling partnerships in the story.

Howard goes for a more playful tone than past Star Wars movies, but the origin story isn’t adventurous or bold enough to make it a notable entry in the franchise. “Solo: A Star Wars Story” has a few captivating environments and sequences, as well as side characters that you’ll want to visit again, but it doesn’t feel all that different from the overly familiar popcorn movies we see this time of year that deliver on action and scope but not much else.