Trending
You are at:Home»Vices»Drink of the Week: The Lemon Drop 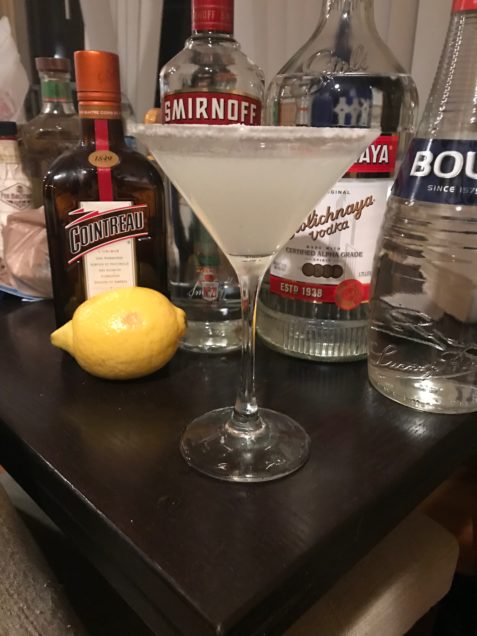 I’ve been carefully avoiding the Lemon Drop for years, but a week or so back some of my favorite cousins requested I make it for them as a pre-Seder aperitif. It was with a sense of condescending noblesse oblige that I nobly obliged them by following a recipe that was kind of sweet by cocktailian standards and contained a cocktail snob’s least preferred base spirit. It was…pretty okay and a fine gateway cocktail for the uninitiated.

Combine the ingredients in cocktail shaker loaded with ice. Shake until your hands freeze off. and strain into a chilled glass that you have rimmed with sugar. Sip and contemplate how annoying knowledgeable enthusiasts can actually be.

Now, about that essential sugar rim. We’ve discussed this before, but you can do this by wetting the edge of the chilled glass, ideally by running your spent lemon along the top of the glass and then by placing the top of the glass in a plate loaded up with sugar.Superfine sugar (aka baker’s sugar) is easier but regular sugar is okay. Indeed, if you’re using standard sugar you can do as my hosts did and add lemon zest; it definitely adds a bit of extra zing, but I was much too lazy to attempt it at home.

Moving on to brands, the vodka selected by my swell hosts was Trader Joe’s Vodka of the Gods. Now, while cocktail snobs insist that vodka has no flavor, it is my experience that truly bad vodka has plenty of flavor, just not the kind of flavor any sane person wants. I sipped a brand once called Barrington’s that could have passed for Lysol accented with a hint of paint thinner. Of course as all thrifty gourmets in your more bougie locales know, nothing is ever really bad at TJ’s and their vodka worked out just fine, as did your basic value priced triple sec. We all agreed it was a very pleasant, sweet treat. This version had only 1 1/2 ounces of vodka and half an ounce each of lemon juice and orange liqueur.

At home I upped the ante by making a bigger drink with two ounces of vodka and 3/4 ounces each of lemon juice and  triple sec. My vodkas at DOTW Manor were Smirnoff and Stolichnaya. I have to say that while there’s no denying that Stoli is more pleasant sipping on its own than Smirnoff , i really might as well have used a generic (but not Barrington’s!) in my Lemon Drops, for all the difference it made.  I also found that leaving out the teaspoon of sugar was a very legitimate way to go — the sugar rim on top is actually kind of enough, and makes this drink more like a Sidecar.

My choice of liqueurs, however, did make a difference. My inexpensive Bols Triple Sec and Hiram Walker Orange Curacao were  both fine, but more expensive, cocktailian-friendly Pierre Ferrand Dry Curacao really did add a nice not-too-sweet touch. I really should have tried it one more time with Cointreau — especially as it appeared prominently in  every usable picture I took of the drink. But, by the time I got to it, I really couldn’t bring myself to have the drink for what was probably a sixth or seventh time. It was time to lemon drop out.