Trending
You are at:Home»Entertainment»Movies»Lethal Ladies: The Most Badass Women in Cinema 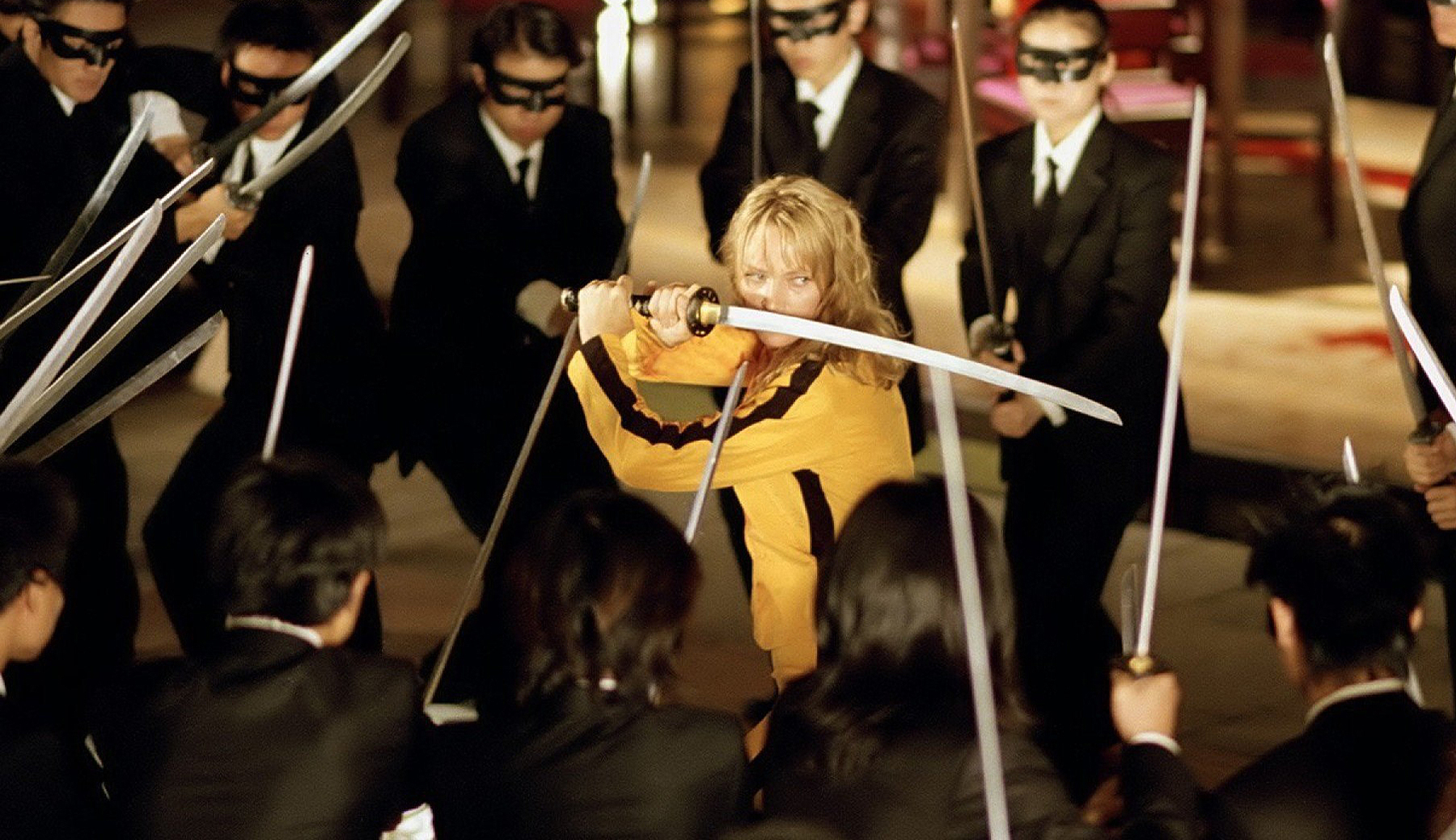 As long as there have been movies, there have been heroines that have faced impossible odds and strenuous events to come out on top. Whether it’s Letty in “The Wind,” Maria in “Metropolis” or Scarlett O’Hara in “Gone with the Wind,” female characters have been pitted against insurmountable odds, albeit usually in a dramatic fashion. The strength of these women is shown through their ability to withstand hardships, to survive against all odds, and usually, to end up with the man they love. It wasn’t until the late ’60s and early ’70s that this inner strength was made external and women were suddenly capable of kicking as much butt as their male counterparts.

With the rise of grindhouse exploitation and the blossoming women’s lib movement of the ’70s, female characters were suddenly able to throw fists and shoot guns with the best of them and prove their mettle on the battlefield. Bullz-Eye has previously looked at screendom’s greatest badasses, but it was mostly a male-dominated field due to the prevalence of men in genre films. However, with the impending release of spy thriller “Red Sparrow” and an increase in women-centric badassery in films today, it was time to put together a women-only list of the deadliest femmes to grace the silver screen. Of course, with any list, there are bound to be some that are left out (i.e. Princess Leia, Matsu the Scorpion, Black Widow, Lady Snowblood, Lorraine Broughton from “Atomic Blonde,” and the many roles of Cynthia Rothrock and Michelle Yeoh), but these are the top 10 most badass women in cinema.

A relative newcomer to the field, whose abilities were merely hinted at in “Captain America: Civil War,” Okoye (Danai Gurira) is the general for Wakanda’s Dora Milaje in “Black Panther.” This all-female elite fighting force represents the most badass warriors in a nation teeming with them. Okoye shows off her skills in a great casino scene, easily dismantling and subduing mercenaries using her signature spear and even a cumbersome wig. Seeing a brash, bald black woman take on thugs, fellow countrymen and even an evil Black Panther is a great indication of what the future holds for warrior women.

In Chan-Wook Park’s “Lady Vengeance” (aka “Sympathy for Lady Vengeance”), Geum-ja Lee (Yeong-ae Lee) is a complicated character. She helps a monstrous man do terrible things, and as a result, loses her child and freedom for it. But quickly realizing how she was manipulated and what she must do to atone for her sins, Geum-ja sets out on a bloody path of retribution. She soon dispatches the prison bully and builds up a network of sister spies that will help her obtain her vengeance when she is released from prison. Building a badass gun and tracking down the vicious creature responsible for her fate, Geum-ja realizes that she is not the only one who is owed revenge and concocts a plan for doling out that incredibly violent, bloody justice upon her antagonist. There’s far less of a body count than in other entries on this list, but Geum-ja proves to be a calculating, resourceful and stone-cold badass as she zeroes in on her target.

While Wonder Woman (Gal Gadot) shows off her abilities in “Batman v Superman: Dawn of Justice” and again in “Justice League,” it was her solo film from Patty Jenkins that really let her fighting flag fly. Watching the embodiment of good, peace and love march across No Man’s Land during intense trench warfare and take out untold numbers of enemy fighters was a rousing call that showed that female superheroes are every bit the equal of their male counterparts. They could trash as many tanks and soldiers as Captain America or Iron Man, and they do it all with fierce style.

Joe Lynch’s “Everly” is an oft-overlooked piece of B-movie gold. Essentially taking place in one night in one location, the film pits the titular woman (played by Salma Hayek) against a cadre of villains all intent on wiping her out. She takes bullets and knives and numerous other bruises and wounds, but she’s able to dispense her own brand of fatal justice against the foolish men who dare to stand in her way. It’s a badass performance that feels like a supercharged “Die Hard” with a hardcore Latina in the lead. Though it may not be as well known as others, “Everly” is worth seeking out just to see how troublesome one woman can be when she unleashes hell.

This entry could just as well be “Pam Grier,” as that woman has been lighting up the screen and smoking fools for 40 years. Whether it’s in jailhouse exploitation like “Black Mama, White Mama,” blaxploitation like “Foxy Brown,” or even smartly outwitting would-be criminal masterminds in “Jackie Brown,” Grier always gives it her all and takes no prisoners. But the reason her title role in 1973’s “Coffy” outshines the rest is the wide range of justice she dispenses in her rampage. Hustlers, drug pushers, pimps, crooked cops, city councilmen, mob bosses — they all fall into her crosshairs, and she dispatches them with the utmost efficiency and without any sign of mercy. It’s a great blaxploitation entry that further cemented Grier as the badass woman on the scene who could easily handle her own against a slew of bad dudes, no matter their place in society.

After using the first half of “Death Proof” to establish how cruel Stuntman Mike can be to unsuspecting women, Quentin Tarantino then shifts to a new group of ladies played by Mary Elizabeth Winstead, Zoë Bell, Rosario Dawson and Tracie Thoms. Unfortunately for the papier-mache tiger that is Stuntman Mike, these women are even fiercer than he is and are unrelenting in exacting justice for his attempts to kill them. Whether it’s Bell riding on the hood of the car while Mike tries to kill them all, Thoms shooting the prick in the arm and showing him who he’s dealing with, or all three (sans Winstead) taking turns beating the piss out of the maniac, there is no mistaking just how deadly and unstoppable these women scorned truly can be.

Leading a group of emancipated brides away from their would-be captor, Furiosa (Charlize Theron) is a woman who seeks to break the chains in which she’s been forced to live her whole life. Armed with a big rig, a mechanical arm, some guns and a whole lot of grit, she traverses the wasteland and fends off all of Immortan Joe’s thugs and allies. And when she realizes that the promised land she hoped to deliver these women to doesn’t exist, she does the most badass thing possible: she turns the truck around and rams it right into the heart of that monster’s power, ripping him asunder as she does so. Furiosa refuses to be undone by the hordes of enemies, by the impossible odds and by the sheer desolation that forces her to submit to the way things are. Instead, she fights her way free of all of it and leads her people to a brighter tomorrow.

The first member on this list to be a part of Bullz-Eye’s Badass Hall of Fame, Beatrix Kiddo aka Black Mamba aka The Bride aka Mommy (Uma Thurman) cuts a bloody swath across the globe in her rip-roaring rampage of revenge as she seeks the people responsible for putting her in a coma and taking her child from her. From the quaint suburbs, to a sake house in Tokyo, to a trailer in the desert, to a hacienda in South America, no amount of obstacles or distance can get in the way of The Bride tracking down and dispensing brutal justice to the people that have wronged her. She takes on all different types of adversaries and combat — knife fights, yakuza gangs, shootouts, being buried alive and more – just so she can sate her thirst for vengeance. And after all of the blood has been washed away and the shell casings have hit the floor, she’s reunited again with her lost little cub and able to redefine her life on her own terms.

In the first “Terminator” film, Sarah Connor (Linda Hamilton) is a simple waitress caught up in an extraordinary and impossible situation involving time travel and murderous robots. The second “Terminator” finds a completely changed Sarah — one who knows of the impending doom awaiting mankind and is damned sure going to be prepared for it. She’s jacked and hardcore, even in restraints in a psychiatric institute, and knows her way around an assortment of weaponry that she has stored across the country. This isn’t a woman being led around by a man or hoping to be saved by someone else, but instead a fulfillment of the promise at the end of the first film of a warrior who is prepared to take on the future and dole out any number of shotgun blasts and broken bones to protect her son and avoid Armageddon.

Through four different films, Ripley (Sigourney Weaver) finds herself in increasingly chaotic and untenable situations facing off against corporate backstabbing and a creature perfectly designed for killing. Her progress from simple space jockey to out-and-out badass is incredible to behold. Whether it’s killing off the lone xenomorph that wiped out her crew, showing a bunch of space marines how it’s done when facing down an Alien Queen, leading a prison planet against a ravenous creature, or even being reborn to face the hordes of intergalactic evil again — Ripley is the ultimate badass that brokers no shit from anyone and is merely interested in besting her alien nemeses to protect worlds from the menace she knows all too well. Another placer in the Bullz-Eye Badass Hall of Fame, Ripley is a great role model for a no-nonsense action heroine who stares death in the face repeatedly before rushing head first into battle.