Trending
You are at:Home»Entertainment»Movies»Movie Review: “Jumanji: Welcome to the Jungle” 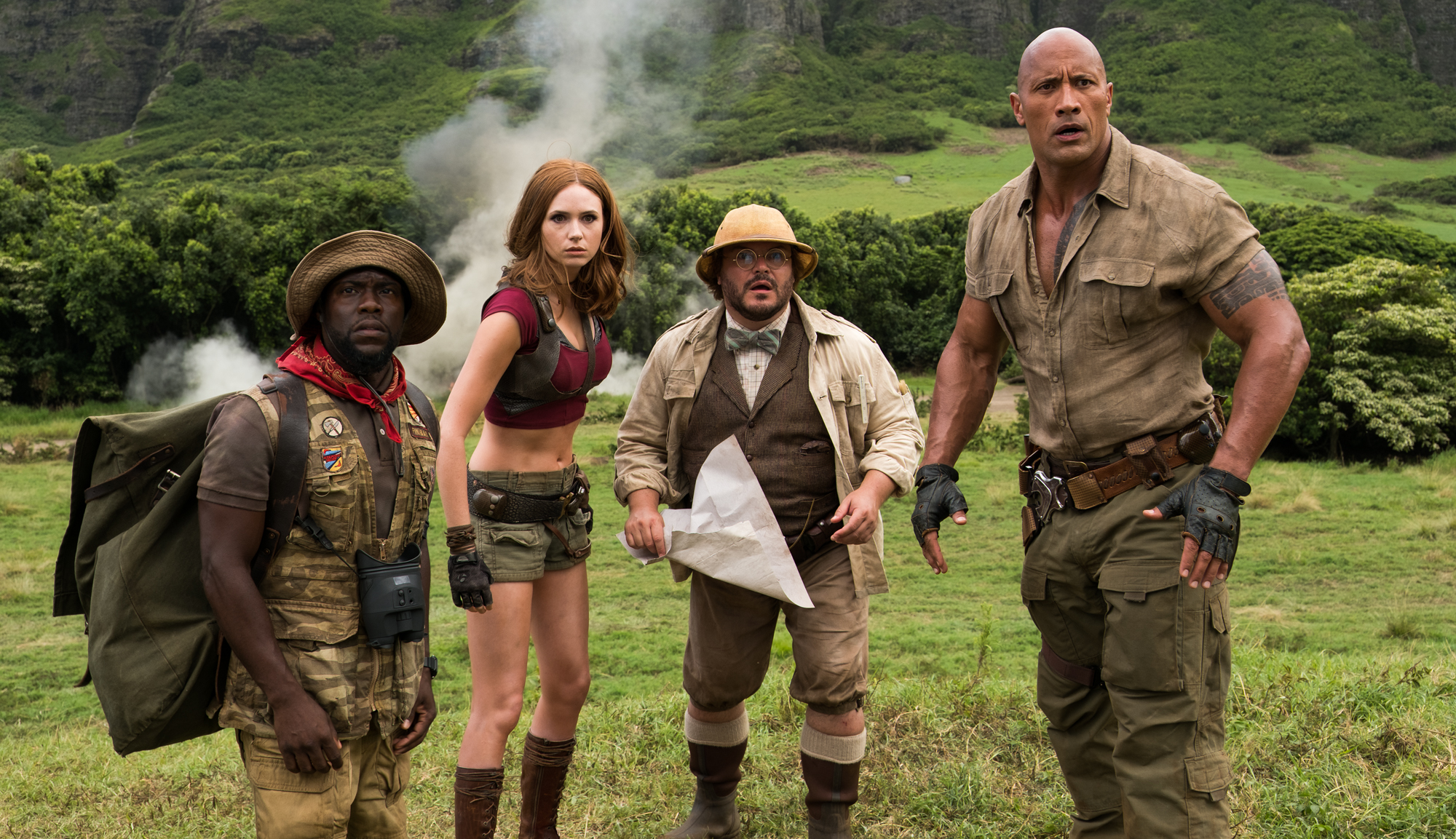 The ideal Hollywood is one that doesn’t rely so heavily on reboots of existing properties – this year alone, “Baywatch,” “CHiPS,” “The Ring,” “Power Rangers,” “Going in Style,” “The Mummy” and “Flatliners” were all rebooted, God help us – but that does not mean, despite the evidence I just laid before you, that it should never happen. The “Footloose” remake, amazingly, worked, and so does the wildly entertaining “Jumanji: Welcome to the Jungle.” It’s a strange blend of sensibilities in that it largely opts for broad humor (which makes sense), but between the brilliant casting and some expert highbrow joke placement, it’s clear that the filmmakers are not sleepwalking through this one.

Smart but geeky Spencer (Alex Wolff), football star Fridge (Ser’Darius Blain), intelligent introvert Martha (Morgan Turner) and selfie-happy pretty girl Bethany (Madison Iseman) are all sentenced to detention and assigned the task of cleaning out an unused storage facility in their school. Fridge spots an outdated game system on one of the shelves, and Spencer plugs it in to a TV. The game is called “Jumanji,” and each of them picks a character to play within the game. Once they have all chosen their characters, they are sucked into the game and now look like their avatars. Spencer is Dr. Smolder Bravestone (Dwayne Johnson), Fridge is Franklin “Moose” Finbar (Kevin Hart), Martha is Ruby Roundhouse (Karen Gillan) and Bethany is Professor Shelly Oberon (Jack Black). At this point, their only way out is through, and they quickly realize that they need to work together if they want to get out of the game alive.

Switching the format from a board game to a video game was a genius move, and the film is very smart about playing by video game rules. Expository characters will only interact with certain people and can only answer specific questions. There’s a ‘cut scene’ that magically appears as the group’s guide Nigel (Rhys Darby) explains the object of their quest. Each character discovers a pop-up list of their strengths and weaknesses. There are Easter eggs (hidden shortcuts inside the game). Martha wonders why Ruby is running through the jungle dressed in a half-shirt and short shorts. (Answer: Because you were designed by boys, silly.) Flipping the script so that all players travel to the jungle has another sweet bonus: the film is able to pay homage to Robin Williams’ character, who was stuck in that jungle for decades in the 1995 original.

For Johnson, Gillan and Black, this film is a perfect opportunity to play to their strengths while jumping out of their skin at the same time (Hart is basically playing the same character that he plays in all of his films). Indeed, Gillan and Black, rather than Johnson and Hart, have the premiere parts here. Gillan has a hilarious scene where she tries to seduce two soldiers, and since she’s Martha, she’s incredibly bad at it. Black, meanwhile, is shockingly good as a vain teenage girl. This is the best part he’s had in ages. Johnson does get a couple of moments to shine, though. Check his avatar’s name for a clue. Nick Jonas also adds some nice support as the avatar Jefferson “Seaplane” McDonough, and really, what a great in-joke to cast Jonas as a video game character, since he looks like he was built in a lab.

Sadly, there is something else that pays homage to the 1995 original, and that is some spotty CGI. The original film looks awful by today’s standards (and even by 1995 standards, if we’re being honest), which is why it’s shocking to see some dodgy-looking animals and zoom cuts 22 years later. Is there any excuse for bad CGI in a major motion picture in 2017? No. There isn’t.

There’s no magic trick to making a movie like “Jumanji: Welcome to the Jungle.” The reason some reboots work better than others usually comes down to how hard the filmmakers tried to come up with something that stands apart from the source material. Indeed, if this and “Star Wars: The Last Jedi” have proven anything, it’s that sometimes the best approach to a beloved franchise or property is to burn everything to the ground.