Trending
You are at:Home»Vices»Drink of the Week: Potion de Muerto (Warning! Scary Movie Digression Below) 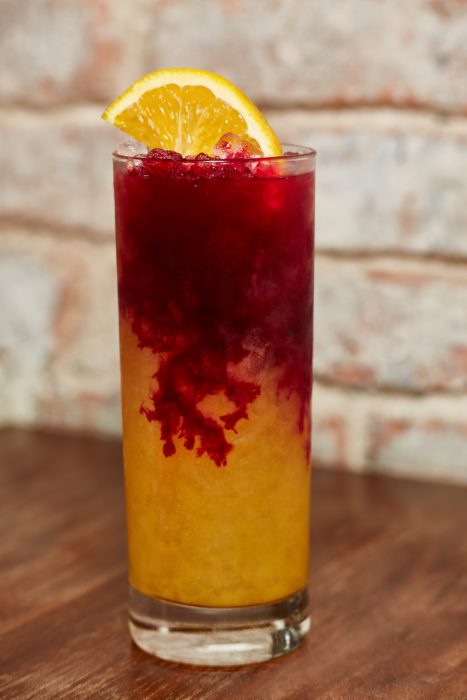 If you’re wondering what makes my pre-Halloween Drink of the Week so seasonably bloody, well, this is the firs cocktail ever to include actual human blood. Okay, no. That would be gross, incredibly unsanitary, and I’m pretty sure illegal. Also, I have this really weird relationship with fake movie blood and gore, never mind the real thing. (We’ll get that to that later.)

The purplish red stuff in this drink is actually beet juice and while I know there are some people who’d almost rather drink human blood than consume anything in any way derived from beets, it works beautifully in this drink  — taste wise as well as Halloween icky-wise

Our deadly spook-holiday elixir comes via the people behind Hornitos Black Barrel Tequila, the perfect spirit to buy if you can’t decide whether you’d like prefer tequila or Scotch. Their well conceived Potion de Muerto, which builds on the strong flavor with sweeter tastes, is definitely appropriate for any Halloween festivities you might have planned and, since it’s base spirit is tequila and it’s name is Spanish for “Potion of Death,” it’s also a perfect accompaniment to an observance of the Mexican Day of the Dead, a more soulful Halloween adjacent celebration.

If you’ve ever felt like death might be sweet, here’s a drink that will make that idea all too concrete. It’s as tasty as a Vincent Price movie on a late Friday night.

Put all of the ingredients, except for the beet juice, in a cocktail shaker with plenty of ice. Shake vigorously and strain into a highball glass filled with a fair amount of ice, preferably crushed. Add the beet juice as a float on top, and watch the beety “blood” drain downwards. Have a sweet sip and toast Lady Death. You’re going to meet her anyways, so you might as well be on good terms.

As much as this colorful cocktail might not be for the ultra-squeamish, the main group of folks it might offend are those who don’t like lots sweetness in their drink — which comes mostly from a very healthy serving of agave syrup in the recipe. Nevertheless, I think most people will love it. On the other hand, please remember to put in those orange bitters. (I actually forgot a few times and it was still good, but terrifyingly sweet.)

Moving on,  the beet juice is not just about looking gross, it mellows out the other favors. (And in the credit where credit is due department, here’s to Mr. Juice, probably the only place in L.A., and almost certainly the only place in the San Fernando Valley, I could have found beet juice and 10:30 p.m. in the middle of the week; better yet, they refused to charge me because I only needed a few ounces. Nice people. They also have pizza! )

One more point, while the drink works just as well tastewise with regular ice cubes as with the crushed ice suggested in the original recipe, the “blood” doesn’t quite ooze and congeal in the same repulsive way…though the bloody ice cubes have their own sickly creepy appeal.

And now for that scary movie-themed digression I promised you! Feel free to exit the building if all you care about is boozing.

I’m going to be writing more about this next week in a non-cocktail context, but I’ve always had an ambivalent reationship with horror movies, particularly, the bloodier variety. My problem is that, while I love being creeped out a bit, I really don’t enjoy being traumatized and I’m actually somewhat phobic when it comes to really extreme gore. I’ve a fairly long list of movies I will never see; most films involving graphic depictions of cannibalism are definitely off the menu. So strong is my aversion  that I wonder if I might have actually been eaten by a fellow human in a previous life, or maybe I was the one doing the eating. Ugh.

Still even very gory movies without cannibalism are difficult and sometimes impossible for me. This becomes a genuine cinephile dilemma when there’s a movie or TV show I’d actually like to see if it wasn’t for all that red stuff and innards.  What’s been my solution? Booze, of course.

It began the first and only time I saw George Romero’s seismically ground breaking “Night of the Living Dead”; the cannibalism thing had previously been a deal-breaker. Yes, it’s in black and white and quite mild compared to later Romero zombie films, but seeing people eat pretend human flesh on screen, no matter how briefly, seemed like more than I could take. Nevertheless, two film school friends basically shamed me into watching it one night when MTV was playing the film uncut. I demanded alcohol. I don’t know why I didn’t demand harder stuff, but I believe it was probably two bottles of Lucky Lager that had to suffice. I don’t remember the beer having much impact, but the movie was another story. Even on a 16″ TV, it was great, if traumatic, cinema. I’ve never seen it since but it’s not a movie you forget.

Years later, the arrival of “Kill Bill, Volume 1” presented another challenge. It wasn’t actually a horror film, exactly, but word was out that it was quite something in the blood and gore department, and some critics were all but calling it the end of human civilization as we then knew it. Still I was and am a pretty die hard Tarantino fan. It occurred to me that one solution was to secrete an airplane bottle or two of hard liquor on my person into the theater. Never mind that I was at a 10:00 a.m. showing. It worked and the “Kill Bill” movies are now favorites of mine, even if I have a hard time getting through without closing my eyes a couple of times.

Some years later, however, I chose to pursue my personal gore Everest for a now defunct movie blog of mine. Mr. Romero’s original “Dawn of the Dead” had tormented mesince it came out in 1978 and I was just starting to cut my teenage movie teeth. On the one hand, it combined horror, action, satire, and social commentary. My kind of flick! On the other hand, it contained so much ultra-violent gore that it was assumed the MPAA would give it a kiss-of-box-office-death X rating for violence, had it been submitted. Not my kind of flick! I was even mad at the L.A. Weekly for featuring a black and white still of a guy with a meat cleaver in his head with their original review. Yeesh. 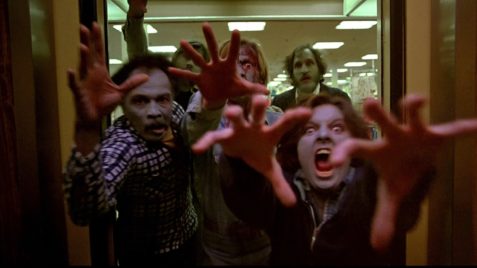 Cut back to more than two and half decades later, when I was just starting cut my middle-aged cocktail teeth. I rented the “Dawn of the Dead” disc — this was before flat screens and high-def had become ubiquitous. Even the fact that the DVD bragged that it was processed in some kind of visually superior high-def process called Divimax made me nervous. I would have preferred low-def Crappimax`

Yes, there was no way I was going to do this without fortification. The closer it got to time to watch the movie, the more anxious I became…not anxious, really frightened. To this day, I’m convinced that I would have handled actual flesh-eating zombies hanging out in the backyard better than I handled the prospect of seeing that movie.

So, out came the cocktail shaker. I tried one vodka martini. Nothing. Two martinis. Nope. Three martinis….I think I got up to six before I thought I was ready for Mr. Romero’s magnum opus. I settled in for the film and  actually seemed to enjoy myself. In my altered state, I even liked the gore and ultraviolence! I finished the film and happily had some dinner. I went to sleep.

I don’t really get proper hangovers, but I was definitely not at my best the next morning. Also, it slowly dawned on my that I had all but drunk myself into a blackout. My housemate informed me that, at one point, I was completely unable to operate the remote control for the DVD player, and he felt obliged to take charge. I didn’t remember that! Now, just what did I remember of “Dawn of the Dead”?

The movie I could sorta kinda recall pretty much could have gone out with a PG-13 rating Clearly, I couldn’t say I’d actually seen it. So, I restarted the DVD, sat as far back from my 32 inch fat screen as I could, and had a Bloody Mary. My verdict: a great movie that’s genuinely frightening, thought provoking, and disgusting that I didn’t plan to ever see again.

Over the years, I’ve been covered in stage blood on a film set, I’ve interviewed the leading creative in modern gore, I’ve read scads of articles about films I will never see, and I had a great time. Yet, put some of that same blood I was once covered with on a screen and I’m squirming and wishing I was somewhere else. Black magic happens when a movie is made and putting stuff that looks like blood on a screen can be, for some of us, much too much.

Since I present recipes here, here’s one for real live movie blood from a 2013 Slate piece. It’s supposedly the creation of legendary effects and make-up artist Dick Smith. I can’t vouch for it’s accuracy, but the corn syrup definitely rings true.

So, happy Halloween everyone, and I’ll leave you with one word of advice. If you’re ever covered in stage blood like I was, and you ever get the temptation to taste the stuff: Don’t!