Trending
You are at:Home»Vices»Drink of the Week: The Millionaire (The Haigh Take) 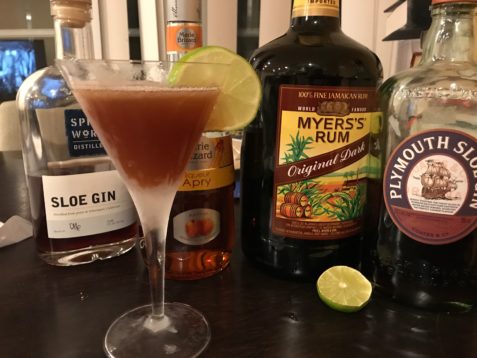 That’s because there’s several cocktails running around calling themselves the Millionaire. This is a similar case to the Corpse Reviver, where we have multiple drinks running around with the same name and completely different recipes.

Our Millionaire for this week is a thoughtful adaptation by cocktail historian Ted Haigh, aka Dr. Cocktail, of a very sweet prohibition era drink that arguably foreshadowed the rum-soaked post WWII tiki craze. It was called “The Millionaire #1” in The Savoy Cocktail Book of 1930. According to Haigh in 2008’s Vintage Spirits and Forgotten Cocktails, it was also featured in something called The How and When from 1937, where it was “The Millionaire #4.” These recipes called for equal parts Jamaican (dark) rum, apricot brandy (actually a very sweet liqueur, with brandy), sloe gin (also fairly sweet), the juice of one lime (what size is your lime?), and a dash of grenadine.

As you can imagine, this would be a ridiculously sweet drink…I was tempted to try it, but I’m not sure my blood sugar could take it. In any case, Haigh’s adaptation works like a charm. It’s refreshing and almost perfectly balanced between sweet, tart, and complexly fruity flavors. See what you think.

The Millionaire (the Haigh Take)

Combines the ingredients in a cocktail shaker and shake very vigorously. I’d suggest about 15 seconds at least. Strain into a pretty darn large, well chilled cocktail glass. Sip and contemplate the fact that almost anyone who owns two pieces of property in the Greater Los Angeles Area can now be called a millionaire, and you only need one piece in many parts of town. And it goes double if you’re talking about San Francisco or Manhattan. Thurston Howell III and Lovey would hate all that competition.

However, using Appleton Jamaica Rum was almost as good. Papa Pilar’s Dark Rum wasn’t at all bad, but seemed to mix less well than the other ingredients; it’s possible this outstanding rum is actually too smooth to stand up the barrage of flavors. Spirit Works Distillery Sloe Gin, which is good, but not as good as Plymouth, was very definitely an acceptable substitute. Just make sure you don’t use one of the really nasty cheap sloe gins that are out there. You might not even really want to be a multi-millionaire, but you deserve to drink like a thousandaire, anyway.