Trending
You are at:Home»Entertainment»Movies»Blu Tuesday: “Pulp Fiction” and More

Pick of the Week: “Pulp Fiction” 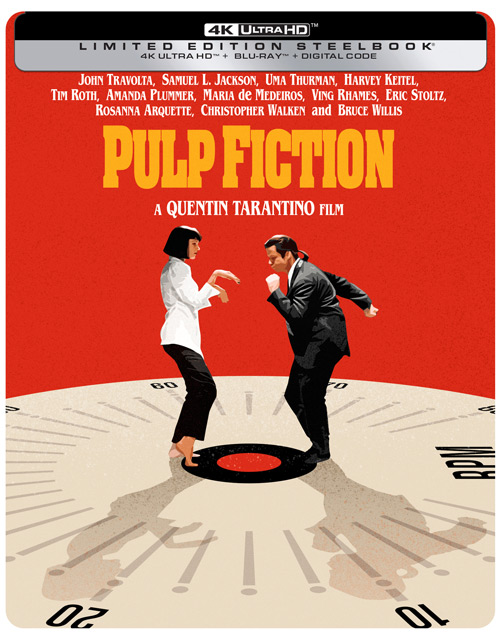 If “Reservoir Dogs” is the movie that put Quentin Tarantino on the map, then “Pulp Fiction” is the film that made him a household name. Though it’s a much bigger movie — in size, scope and ambition — it shares many of the same technical and thematic elements of his directorial debut. “Reservoir Dogs” arguably has the snappier dialogue, but the screenplay for “Pulp Fiction” is richer and more nuanced, showcasing Tarantino’s mastery of character and storytelling, especially the way that the nonlinear narrative rewards the audience with additional layers and hidden details. It also contains some knockout performances from Samuel L. Jackson and John Travolta, as well as a bevy of fun supporting turns from Uma Thurman, Eric Stoltz, Harvey Keitel, Tim Roth and Amanda Plummer, among others. Though the new 4K restoration isn’t as impressive as Lionsgate’s recent 4K release of “Reservoir Dogs,” it’s still a marked improvement over previous editions and a worthwhile upgrade for most fans.

Extras include a roundtable discussion with Tarantino and the cast, a behind-the-scenes look at making the film, deleted scenes, an enhanced trivia track and more. FINAL VERDICT: BUY

“Amsterdam” — Seven years after his last film, the 2015 dramedy “Joy,” writer/director David O. Russell returns with this historical comedy loosely based on a real-life political conspiracy to overthrow the American government. Unfortunately, while Russell has managed to attract an all-star cast of talent, “Amsterdam” fails to put it to good use. Though Christian Bale is excellent as always, and Margot Robbie turns in solid work as the female lead, the rest of the cast is let down by Russell’s script, which is a convoluted mess filled with underdeveloped characters and half-baked ideas that never amount to anything. The film certainly has its moments thanks to Bale’s eccentric performance, but in the end, it’s a disappointing misfire that fails to live up to its potential. Extras include a making-of featurette. FINAL VERDICT: SKIP

“Clerks III” — After the shitshow that was “Jay and Silent Bob Reboot,” my expectations for Kevin Smith’s third “Clerks” film were mixed at best, and it appears that concern was completely warranted because it’s not a good movie in any way. In fact, it’s pretty terrible from top to bottom, exposing a level of amateurishness that seems to plague every Smith production these days. The acting from franchise stars Jeff Anderson and Brian O’Halloran has never been that great, but it’s really poor in this installment, while the camerawork and editing feel especially cheap and lazy. However, the biggest problem with the movie is Smith himself, as “Clerks III” is so obsessed with trying to replicate the original film (both narratively and spiritually) that it forgets what made it so memorable in the first place. Extras include an audio commentary by Smith and several cast members, as well as a making-of featurette, a retrospective documentary on the “Clerks” franchise and some deleted scenes. FINAL VERDICT: SKIP