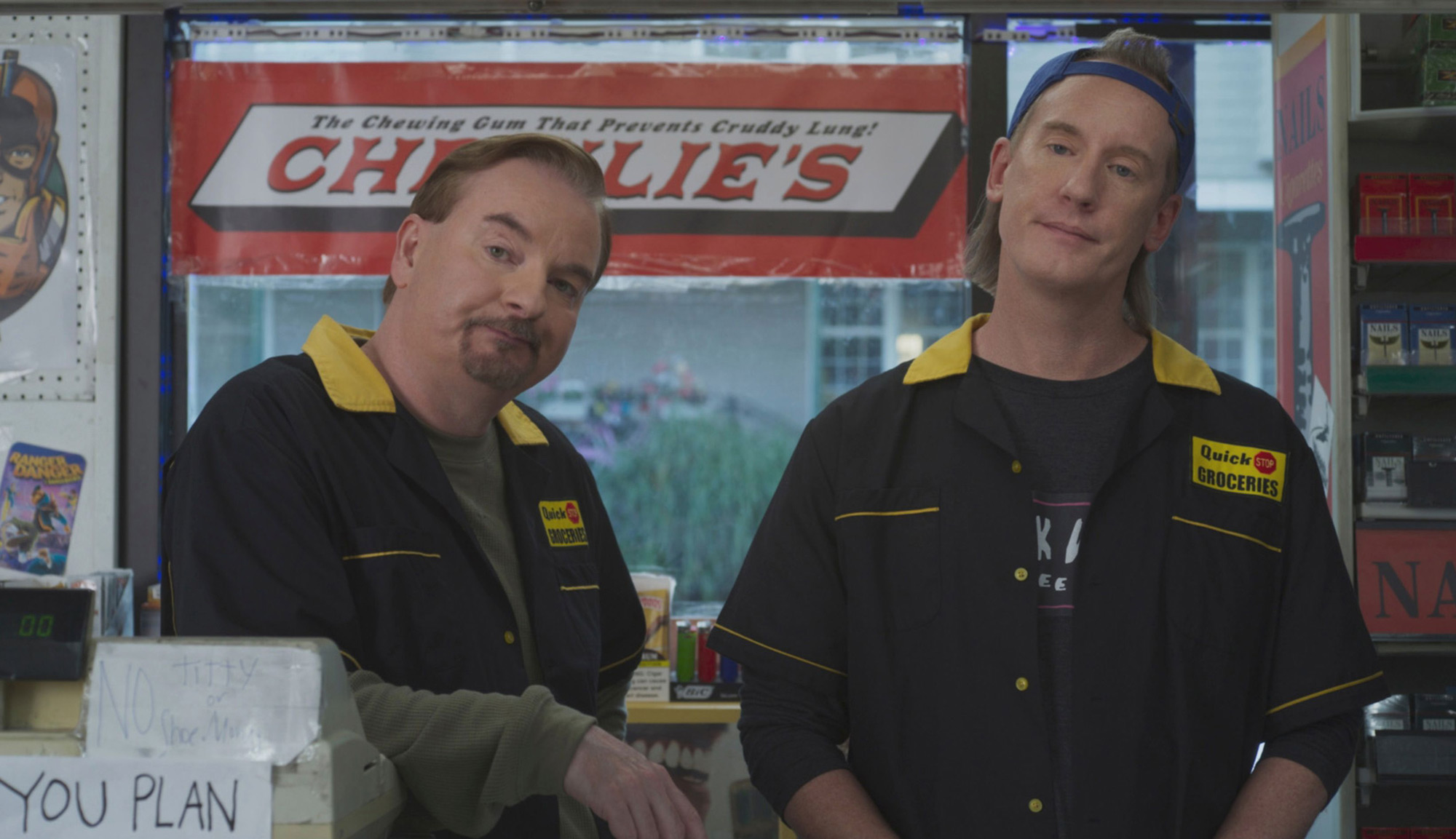 “Clerks” is the reason I write for Bullz-Eye.com. Well, not literally; it’s not like the editorial staff gave me a quiz on the seminal 1994 indie in order to get the gig. But writer/director Kevin Smith’s debut was the gateway to my love of, and knowledge about, film. Growing up an indoor kid, I watched many VHS tapes from the comfort of the couch with a warm blanket and a bad case of asthma. I always dug movies, quoting them and talking about them with folks, and even shamelessly ripping off plot points to populate my short stories for classes. But it wasn’t until a 14-year-old me watched “Clerks” for the first time that I became wholly intrigued by the process of filmmaking, the idea of influences and more.

I’m not alone in this regard, as many ‘90s youths were swayed under Smith’s spell through his early work (including “Mallrats,” “Chasing Amy” and “Dogma”). Before the internet truly exploded, it was still awkward and uncool to be a nerd. But here was a dope movie with a great soundtrack and characters having conversations like my friends and I, all while discussing bigger life issues and figuring out what to do. Soon after, I followed Smith’s career via nascent websites, read about it in John Pierson’s seminal book “Spike, Mike, Slackers & Dykes,” and found interviews where the writer/director tipped his hat to the features that had inspired him. I tracked down those influences while continuing to follow everything that Smith did. (The first screenplay I ever read was for “Clerks,” which was reprinted in a book along with the “Chasing Amy” script). So, it would seem logical that I would love “Clerks III” due to my spiritual connection to the 1994 movie, right? Not so fast.

A lot has changed in the intervening 26 years or so. My understanding and knowledge of filmmaking have greatly expanded, along with a keen understanding of how movies work, how plots and characters tend to fit into basic archetypes, etc. Meanwhile, Smith has evolved into more of an entertainer than a filmmaker; his greatest successes seem to be with his podcast network, speaking engagements, merchandising and other side hustles. And he’s great at those, perhaps at the detriment to the primary job that brought him to Sundance years ago.

Following the disastrous reception to “Jersey Girl,” it seemed like Smith promptly retreated back to the well with “Clerks II,” finding solace in the place where he once received so much praise. Of course, this is also basically what the two main characters, store clerks Dante (Brian O’Halloran) and Randal (Jeff Anderson), end up doing through the course of the movie as they embrace comfort over real growth. “Clerks II” was a bit of heartbreak because, while there are funny and poignant moments (the rooftop dance lesson with Rosario Dawson is a real highlight), it was mostly forced pathos and far too many winking references, which reduced it to a shell of its predecessor and suggested that Smith and I had grown apart in the intervening decade.

If “Clerks” was pivotal to my life, and “Clerks II” was a misfire that eradicated most feelings of nostalgia, what to make of “Clerks III”? It is ultimately a mixed bag whose surprising strengths are often undercut by the usual weaknesses, although it finds a way to be emotionally impactful without leaning too heavily on the goodwill of the first entry. O’Halloran and Anderson are back as their classic characters and, following Randal’s near-death experience, work together to make their own movie about working in a convenience store and video store, respectively. The duo is assisted by a gaggle of familiar faces, including their sidekick Elias (Trevor Fehrman), who has his own sidekick in Blockchain Coltrane (Austin Zajur), and the constant companions and marijuana proprietors Jay (Jason Mewes) and Silent Bob (Smith). The group figures out how to scrape together the resources to film their independent film about their lives almost 30 years ago, shooting in black-and-white in their workspaces, while Dante and Randall clash over their friendship and personalities. Randal wishes to make something important to leave behind for when he does die, while Dante continues to struggle with a personal tragedy and the uncertainty of his own future. Also, Elias goes from a devout Christian to a goth-club Satanist, but that’s not really a factor except in a bunch of flamboyant costumes and belabored jokes.

“Clerks III” is equal parts disappointing and impressive, which is a bizarre and rare feat. One scene will be bogged down by stilted writing, too many self-indulgent references to past works and surprisingly weak performances, and then the next sequence has genuine heart, insight and humor that lands solidly. The lack of consistency is maddening and makes for a rollercoaster of quality across its two-hour runtime. While Smith has rarely been celebrated for his subtlety, the gratuitous over-the-top performances and forced winking is so blatantly broadcasted that it becomes a slog to get through. But then viewers will be rewarded with O’Halloran delivering a sincerely moving moment with Dawson or a hilarious bit of dialogue that is as inventive as it is engaging.

DP Learan Kahanov does a good job replicating the look of the original “Clerks,” which is nice to highlight the full circle nature of the story but also means that it comes with a lot of the restrictions that were more forgivable for a first-time filmmaker working with a shoestring budget. There are certainly more camera movements and stylized shots than the 1994 movie, which produces some touching visuals but can also underscore an emotional point already made by the dialogue and performances.

“Clerks III” is an incredibly vexing film; it’s essentially the antonym of itself, where everything it does well it also does very poorly. It’s hilarious, until it isn’t. It’s moving, until it flounders. It boasts solid performances, until the actors biff it in a scene. It’s unlikely to think that this film will create many new cinephiles like “Clerks” did almost three decades ago. It’s certainly an improvement over “Clerks II,” but it remains an inconsistent affair that only has peaks and valleys with very little in between. Still, you never know what will inspire people to follow a passion. Perhaps seeing two lifelong friends grapple with issues that have remained unresolved for 40 years is what stirs someone to check out “My Dinner With Andre” or some Truffaut flick. Maybe witnessing a group of quasi-slackers talking about butt stuff and Jesus hits home for a viewer, and they set out to write their own screenplay. We cannot choose what will move us or where inspiration will come from — we can only follow it when it arrives. While “Clerks III” has many flaws that drag it down, it also has enough heart and hilarity to change someone’s path.