Trending
You are at:Home»Entertainment»Movies»Movie Review: “The French Dispatch” 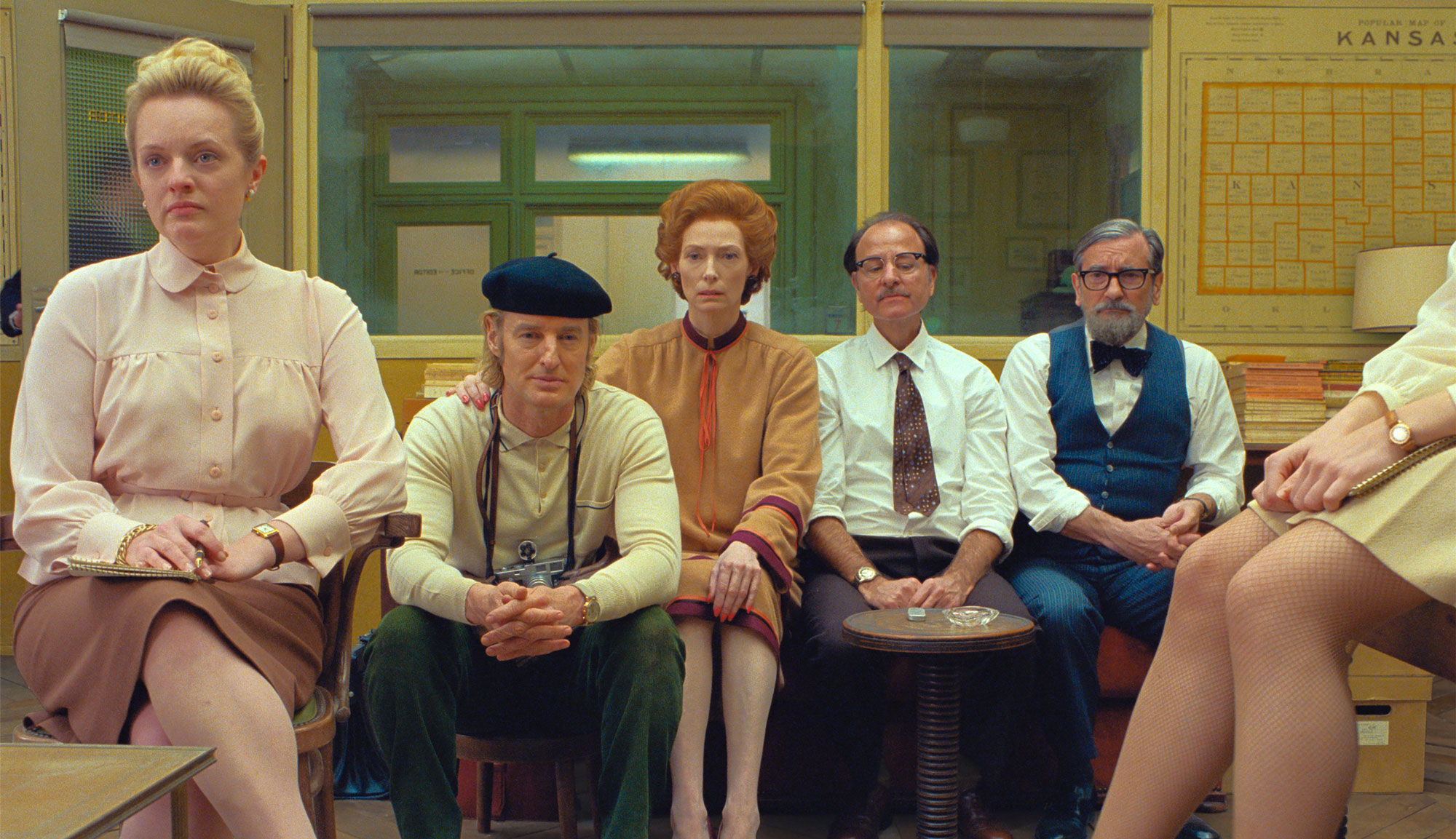 There are a lot of directors working today who have a recognizable style. David Fincher always washes his films in cold, sterile blue hues (when he’s not shooting in black and white, of course); Zack Snyder has never seen a slow-motion effect he hasn’t liked; and J.J. Abrams loves a lens flare as much as Michael Bay loves an explosion. But perhaps more so than any other known director working today, Wes Anderson has a signature style. He’s been in the industry for 25 years now, and he’s just as much himself as ever, meticulously crafting his pastel-infused living dioramas and casually telling the Rule of Thirds to get bent as he places his subjects in the dead center of the frame. This unchanging approach, even when he makes stop-motion films, has resulted in many people pigeonholing him as the twee monarch of the mid-major independent scene — someone who cares about his particular aesthetics far more than engaging emotional content. That doesn’t give him enough credit for a lot of his more resonant storytelling, which has always been present in his work, but it’s difficult to avoid judging his books by their easy-to-recognize covers.

And, yes, “The French Dispatch” is an exceedingly recognizable cover. The story, about a Kansas-based newspaper fostering a community of journalists in the French city of Ennui who put out the titular digest, is about as Wes Anderson a premise as you can possibly imagine. And the cast, featuring Anderson stalwarts like Bill Murray, Tilda Swinton, Owen Wilson, Bob Balaban, Jason Schwartzman, Edward Norton and Adrien Brody, as well as newcomers Timothée Chalamet, Jeffrey Wright and Benicio Del Toro, reads like a murderers’ row of a very specific kind of actor that the auteur loves working with. It wouldn’t be that much of a stretch to extrapolate what the movie must be like. Indeed, like the fictional magazine it serves to lionize, “The French Dispatch” is an anthology film, presenting live-action retellings of the stories from the periodical’s final issue after it’s forced into closure thanks to the untimely death of its longtime editor (Murray).

Following a short travelogue from Herbsaint Sazerac (Wilson) that serves as an introduction to Ennui as a city of equal parts beauty and filth, “The French Dispatch” settles into its meat. The three central stories, narrated by Swinton, Frances McDormand and Wright, respectively, bring to life all sorts of colorful characters, whether it’s the incarcerated mass murderer (Del Toro) reigniting his love for art thanks to his prison guard muse (Léa Seydoux), the fiery college revolutionary (Chalamet) and his rival/love interest (Lyna Khoudri, a delight for her short screen time) or the military leader (Mathieu Almaric) whose son is kidnapped by the head of a local gang (Norton). And while the setting seems to be the only thing connecting the triptych, Anderson’s goal with the film is to not only write a love letter to the written word and the power of journalism but to examine how the writer who gets too close to their subject may end up betraying their journalistic neutrality and affecting events as they strive to document them. This is very much a love letter to writing and writers, showing how the best writing happens when you let the story evolve naturally — not when you stick to silly things like assignment outlines or deadlines.

Perhaps because we know what to expect from the longtime members of Anderson’s troupe of actors, many of the best moments come from the newcomers to his coterie. Each story is anchored by someone new. Del Toro is as magnetic a presence as ever — a barely chained beast with an artist’s soul — while Chalamet (whose involvement in a Wes Anderson film seemed inevitable at some point) is happy to send himself up in the most glorious way. There’s a lot of discussion about precisely how good of an actor Chalamet actually is, but here, as he blusters about with his scant frame, his barely-there, post-pubescent mustache and his tousle of messy hair while writing a manifesto about how unfair it is that he can’t enter the girls’ dormitory, he perfectly undercuts himself. He’s a horny kid who thinks he’s Robespierre. And then there’s Wright, who leads the final and most consequential story, where the pulpy kidnapping plot is subsumed by his deeply personal description of what it was like for a gay black writer of little renown to live in a world that incarcerated him just for existing. His legendary diction brings so much gravitas to the proceedings that you can’t help but fall in love.

“The French Dispatch” has a lot in common with its live-action predecessor, “The Grand Budapest Hotel,” with its European setting, its penchant for playing with aspect ratios and its following of a larger-than-life man through the world he has built and the stories he has told. Yet oddly enough, the film that I kept coming back to was “Sin City,” Frank Miller and Robert Rodriguez’s 2005 anthology adaptation of the comic series. Both films are predominantly told in three major story chunks set in the same city with little to no overlap between them, and both films are predominantly in black and white with the occasional vibrant splash of color. I can’t say that I expected such parallels, and I can’t say that they have any thematic content in common, but if the concept of seeing “Wes Anderson’s Sin City” is at all intriguing, then strap in.

In all honesty, with an artist like Wes Anderson, so much of the reaction comes down to feel. You know that his films are going to look good, even if they’re aesthetically unique, and you know that they’ll be stocked to the gills with name actors having the time of their lives, even if they do so in the purposefully stilted monotone that Anderson enjoys so much. It’s whether that approach resonates that matters in the end. For whatever reason, I found the almost universally acclaimed “The Grand Budapest Hotel” to be rather distant — more of an exercise than a satisfying whole. Whereas here, I honestly loved every single frame of every single second of its 108 minutes. This is certainly Anderson’s best film since “Moonrise Kingdom” and quite possibly the highlight of his career. What an absolute delight this film is.