Trending
You are at:Home»Entertainment»Movies»Movie Review: “Dune” 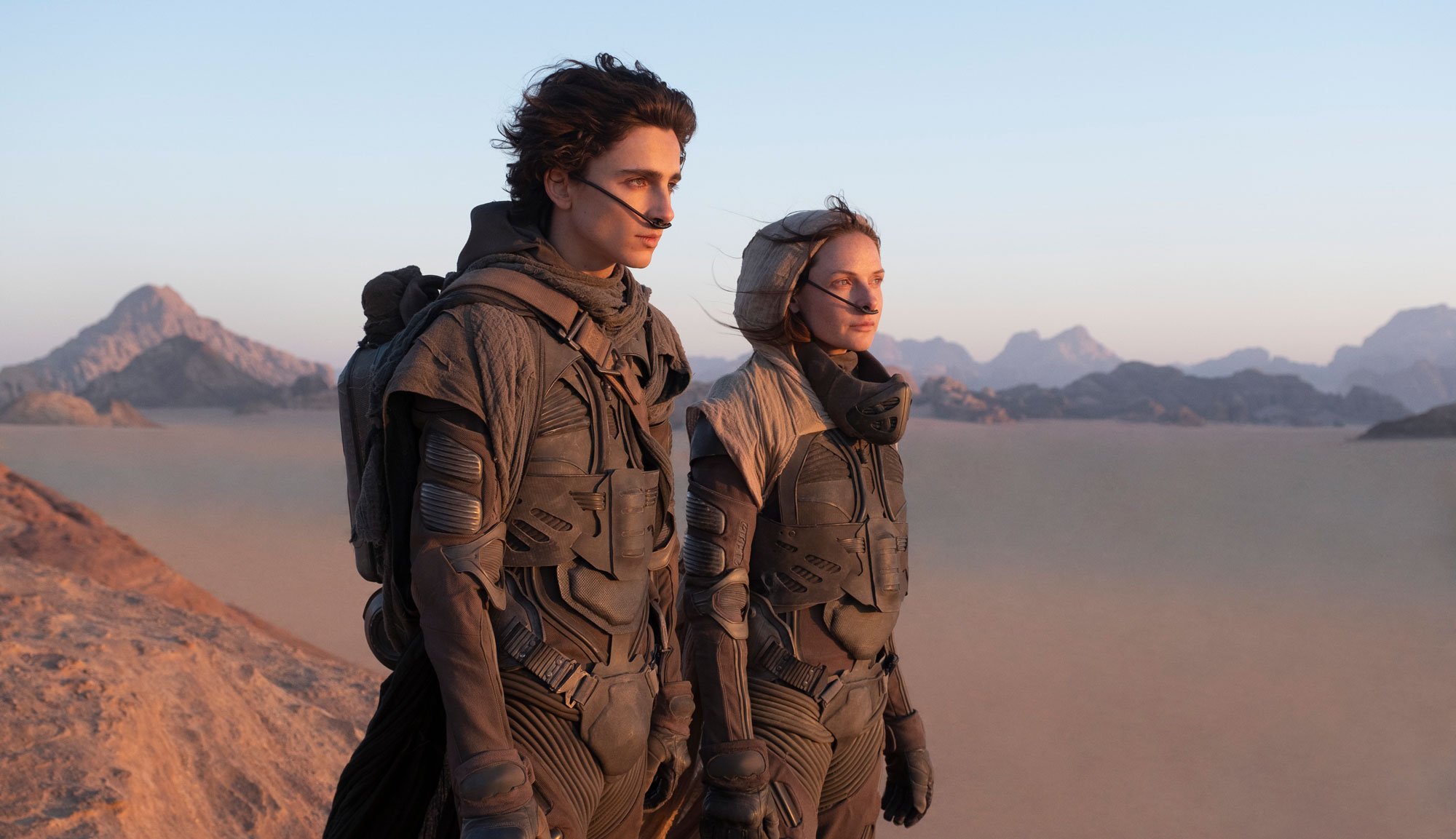 Frank Herbert’s “Dune” series is probably one of the most popular franchises in history that is the least known by people. Generations have read the books or encountered some adaptation or property based on them. But while many folks may recognize the nods and winks to the series in other shows and movies, if asked to explain what a “mentat” is or why the lead character may actually be a villain, the average person’s face would likely glaze over in confusion and annoyance. Herbert’s creation melds historical events, mystic branches of Abrahamic religions and the hero’s journey to deliver a story that entices with its unique nuances and worldbuilding yet also repels with the density of those elements. The idea of adapting the first book into one film has been daunting and seemingly impossible for decades. Perhaps that’s why director Denis Villeneuve didn’t set out to make only one movie — a choice that helps and severely hinders “Dune.”

In the year 10,191, mankind has spanned the stars to create a galactic empire. To cover so much cosmic geography — for commerce, militarization, communication and more — navigators must use Melange (or “spice”), a substance that is found only on the planet Arrakis, to help fold space and allow for interplanetary travel. This makes spice the most important commodity in the universe and Arrakis the focal point of power.

Overseeing everything is The Emperor, who assigns Duke Leto Atreides (Oscar Isaac), ruler of the ocean planet Caladan, to take over control of Arrakis from House Harkonnen, which is led by Leto’s cousin and rival, Baron Harkonnen (Stellan Skarsgård). It’s a massive opportunity that also places a giant target on House Atreides. The Duke’s courtesan, Lady Jessica (Rebecca Ferguson), is aware of this impending doom due to her psychic abilities cultivated as a member of an order of psionic priestesses attempting to bring about the messiah through eugenics and selective breeding. Her son and heir to House Atreides, Paul (Timotheé Chalamet), possesses extraordinary powers and insight that also let him see the dangers that await on the desert planet. Despite knowing that it’s a trap, the Duke answers the call and seeks to forge an alliance with the Fremen, the indigenous people of Arrakis, to end centuries of the horrific injustice that the natives have faced while also bolstering Atreides’ standings in the halls of power.

“Dune” has giant sandworms that can eat ships, a deadly siege resulting in brutal combat, an ancient coven of space witches, mutant creatures that travel through the fifth dimension and bizarre visions fueled by a potent psychotropic drug. These all sound fantastical and the stuff of bombastic space opera, and yet, like the book on which it’s based, “Dune” is more invested in palatial intrigue, political machinations and the characters caught in these power games. Those are some dry topics that are more befitting a television series (or, say, multiple novels) that can focus on many perspectives to make compelling arguments for each character’s motivations and to help communicate the enormous scope of events that are unfolding. That is most likely why the movie is subtitled “Part One,” a fact that has been known but is rarely (if ever) used in the film’s marketing. At 155 minutes, this is just one part of the first book in the “Dune” saga, and there’s no indication if there will be additional entries.

Such a fragmented status makes “Dune” difficult to review. Firstly, for those unfamiliar with the source material, the film will most likely be a bit awkward and confusing. Despite the efforts of Villeneuve, who co-wrote the adaptation with Jon Spaihts and Eric Roth, there remains a lot of exposition dumping that seemingly never stops from the first scene to the last. Yet somehow, there are still many aspects of the story’s universe that aren’t fully explained and, while not crucial, would help make for a more satisfying narrative (not to mention head off a bunch of “plot hole” videos). While there is a lot of repetition of facts about the Fremen, the Bene Gesserit, et al., Villeneuve does his best to present these informative conversations in scenes that are gorgeously designed and shot. The care that went into perfectly creating a distinct aesthetic for each planet, House and more is truly impressive and makes every sequence seem epic, while the framing and lighting of the characters, along with the actors’ performances, maintains a true sense of intimacy amidst the galactic conspiracies.

All of those plans within plans are catalysts for events, but it’s the relationships and emotions of these characters that interest the filmmakers the most — specifically, how to cope with the knowledge of the imminent arrival of devastation and despair. Leto knows that’s he’s doomed, as his successes have only bred more enemies; Paul knows that he’s different in a way that no one understands; and Jessica knows that she’s been on borrowed time since she betrayed the Bene Gesserit to have a son instead of a daughter. And yet all three aren’t resigned to their fates, even though they literally know it’s inevitable. It’s a melancholic beauty that one rarely finds at the heart of such a wide expanse of story set amongst the stars.

All of the actors do fantastic work, even if some of it is becoming old hand for them. Jason Momoa is a cavalier yet masterful warrior who loves a good laugh and a good battle; Josh Brolin plays a cynical man with a painful past who houses a caring heart inside of his cold exterior; and Zendaya’s Chani is a literal dream girl who’s different than the other women in the protagonist’s life and intrigues him with the possibility of something new and unexpected. All three performers excel in their parts, but they’re becoming familiar territory for them. Isaac, Ferguson and Chalamet are the cornerstones of the film (in terms of its narrative and heart), and they all excel, especially Ferguson, who can imbue layers of personality and emotion into a single line reading or mild change of facial expression. Chalamet occasionally becomes too much of a brooding teenager who sulks in model poses, but it’s not a far-fetched idea for space royalty to act like a petulant celebrity.

As of this writing, a sequel to “Dune” has not been confirmed. Villeneuve sounded off against Warner Bros. for its day-and-date release of the film in theaters and on HBO Max, and with the exception of a couple horror movies, this strategy has led to smaller box office returns. This is to say that there may not be a second part, and if there is, it may not be made by the same people or even any time soon. While it was smart to parse the story out onto a larger canvas, without the guarantee of the rest of the tapestry, it can be seen as arrogance or a missed opportunity. The film abruptly ends without much in the way of character arc completion or narrative intrigue. There are several plot elements and characters completely missing from the film, which is a lot to leave to be addressed in another movie that will hopefully be made someday.

“Dune” is incomplete and lacks a great sense of urgency to see what happens next. Peter Jackson’s “The Fellowship of the Ring” also left out a lot of parts of the trilogy to be developed in later films, but those films were being made at that time. Audiences knew it was part of a bigger story and when to expect more of it, and there were enough dangling threads that promised something entertaining and innovative. That’s why viewers wanted to head back to Middle-earth: to be with these characters, to see what happens next, and to have their expectations met and upended in equal parts. Despite the painstakingly impressive work by Villeneuve and his team to create these gorgeous and intricate worlds unlike any seen before, it’s unclear if audiences will ever get a chance to return to them and, should they get that opportunity, if they’ll still want to go back.