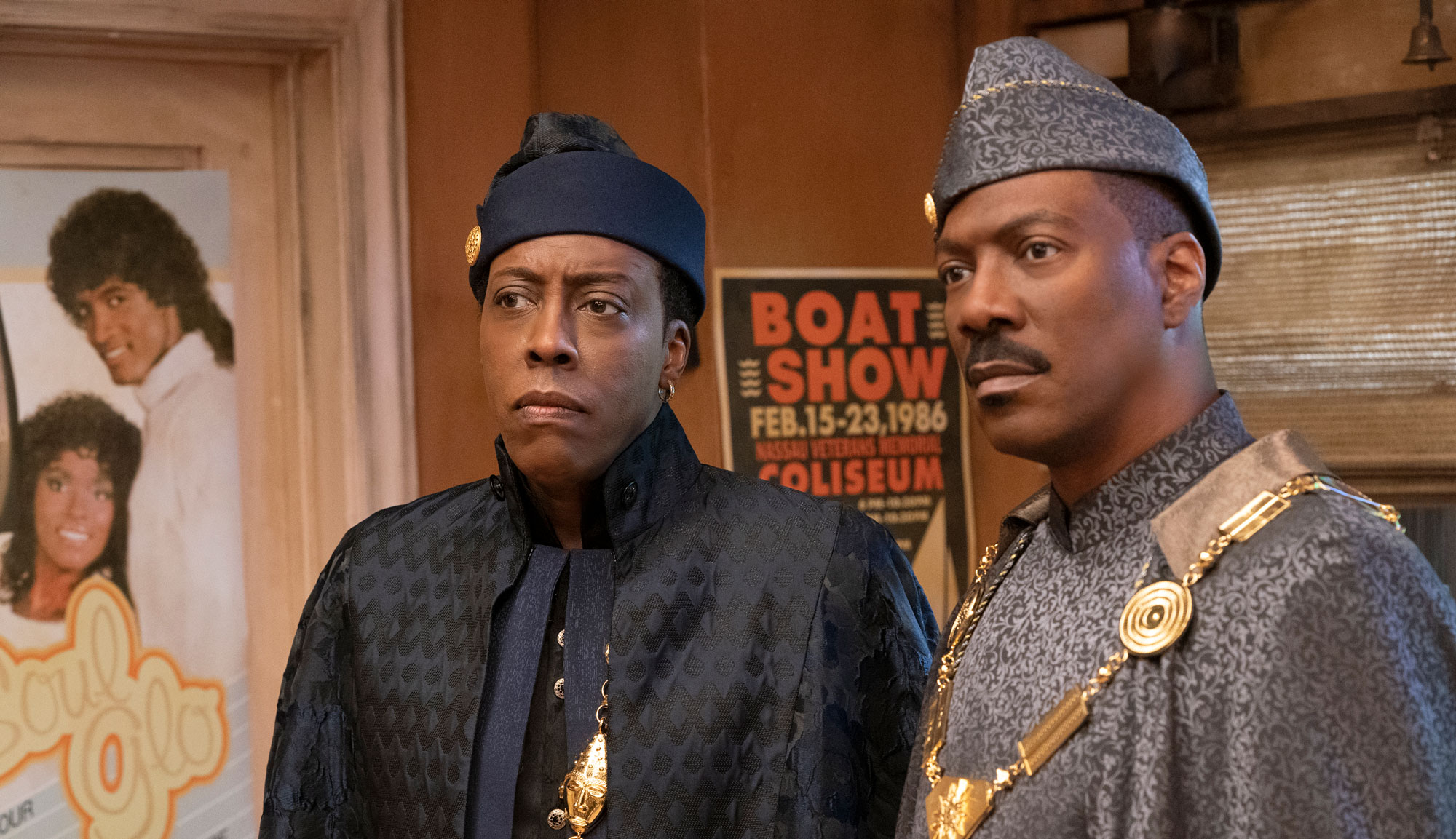 A fairly recent trend of films receiving sequels decades after the last installment has yielded mixed results. In some cases, revisiting these worlds and characters reveals new layers in interesting ways. Other times, it’s mostly just doubling down on the familiar with a series of callback gags that feels like it retroactively tarnishes the original. “Coming 2 America,” which arrives 33 years after the last movie, is rarely hindered by nostalgia for its predecessor; in fact, a lot of the throwbacks end up being surprisingly strong. But in trying to expand the world, the film ends up feeling overcrowded with no real central purpose.

Thirty years after his previous adventures, Akeem (Eddie Murphy) is about to become king of his African country, Zamunda. But Akeem and his queen (from Queens) only have daughters, defying the Zamundan custom that the heir to the throne must be a man. This absence of a successor creates an opening for the ruthless General Izzi (Wesley Snipes) of Nextdoria to threaten war with the opulent Zamunda. Luckily, Akeem’s good friend Semmi (Arsenio Hall) confesses that the new king does have a bastard son back in New York — an ambitious hustler named Lavelle (Jermaine Fowler). Akeem recruits Lavelle (and his colorful family) to come back to the African nation and claim his rightful place on the throne.

Reteaming with Craig Brewer, the director of 2019’s “Dolemite Is My Name,” Murphy once again brings a rejuvenated gusto that reminds audiences how talented he can be when he actually cares. “Coming 2 America” has many faults, but insincerity is not one of them. There’s a real sense of this being a passion project from everyone involved; returning cast members seem gleeful to reinhabit their characters, while new actors seem genuinely proud to be connected with the beloved film. There is a loving expansion to the nation of Zamunda in the cultural customs, wardrobe and set design that reveals that people truly cared about this movie. Even when the story falters, it’s not for lack of trying to get across sincere points or attempt an earned laugh.

“Coming 2 America” could easily have been a cash-in, but the film gets a lot of mileage (and goodwill) from that palpable sense of earnest dedication. The audience is rooting for this movie because it seems like the filmmakers aren’t just banking on nostalgia, which is ironic, as many of the references to the first movie end up being standout moments. The multiple roles performed by Murphy and Hall under layers of latex still work, especially the hilarious barbershop group. Their relationship has the same dynamic energy 33 years later, as does the banter and chemistry between Murphy’s Akeem and his queen, Lisa (Shari Headley). Additionally, James Earl Jones and Jon Amos retain that special combination of sweet and bizarrely humorous that makes their characters so indelible.

But it’s not just a case of mining more jokes from previous setups. Fowler brings fresh energy and a unique attitude, aided by Leslie Jones and Tracy Morgan as his unrefined family; Snipes channels his “Chi-Raq” character and talent for buffoonery that he showcased in “Dolemite Is My Name”; and the three daughters (played by KiKi Layne, Bella Murphy and Akiley Love) generate a fun element of regal mischief, with Layne standing out for her engaging performance in the unrewarding “stick in the mud” role. It’s particularly impressive that the plot isn’t simply the reverse of the original, where people from Queens come to Zamunda and have to adapt.

The major flaw of “Coming 2 America” is that the screenplay by Barry W. Blaustein, David Sheffield and Kenya Barris feels overstuffed, with multiple themes and storylines fighting for attention. This should have been an ensemble piece with storylines intersecting to give each character a chance to shine, and while that’s how the film is structured on paper, in execution, it feels like the whole cast is made up of supporting players and the ties that bind the plot threads aren’t that interwoven. It’s a lot to juggle, with Brewer and company not always succeeding.

Whenever a long-awaited sequel is announced, there are usually two reactions: incredible excitement due to love of the original and intense hesitancy due to the intervening years. It’s hard to capture lightning in a bottle twice, and it’s made even more challenging by the changing times, how the talent involved has aged and more factors that all throw up red flags. “Coming 2 America” certainly has cringeworthy moments with the inclusion of old characters and in-jokes that feel half-baked. Luckily, the majority of the film is filled with performers and sequences committed to doing something special, driving the project with a real sense of passion. There are plenty of hilarious moments, brilliant asides and outstanding character interactions that make it a fun diversion. It’s not the original, but “Coming 2 America” is a fun trip back to familiar territory that feels justified in its decision to revisit these characters.