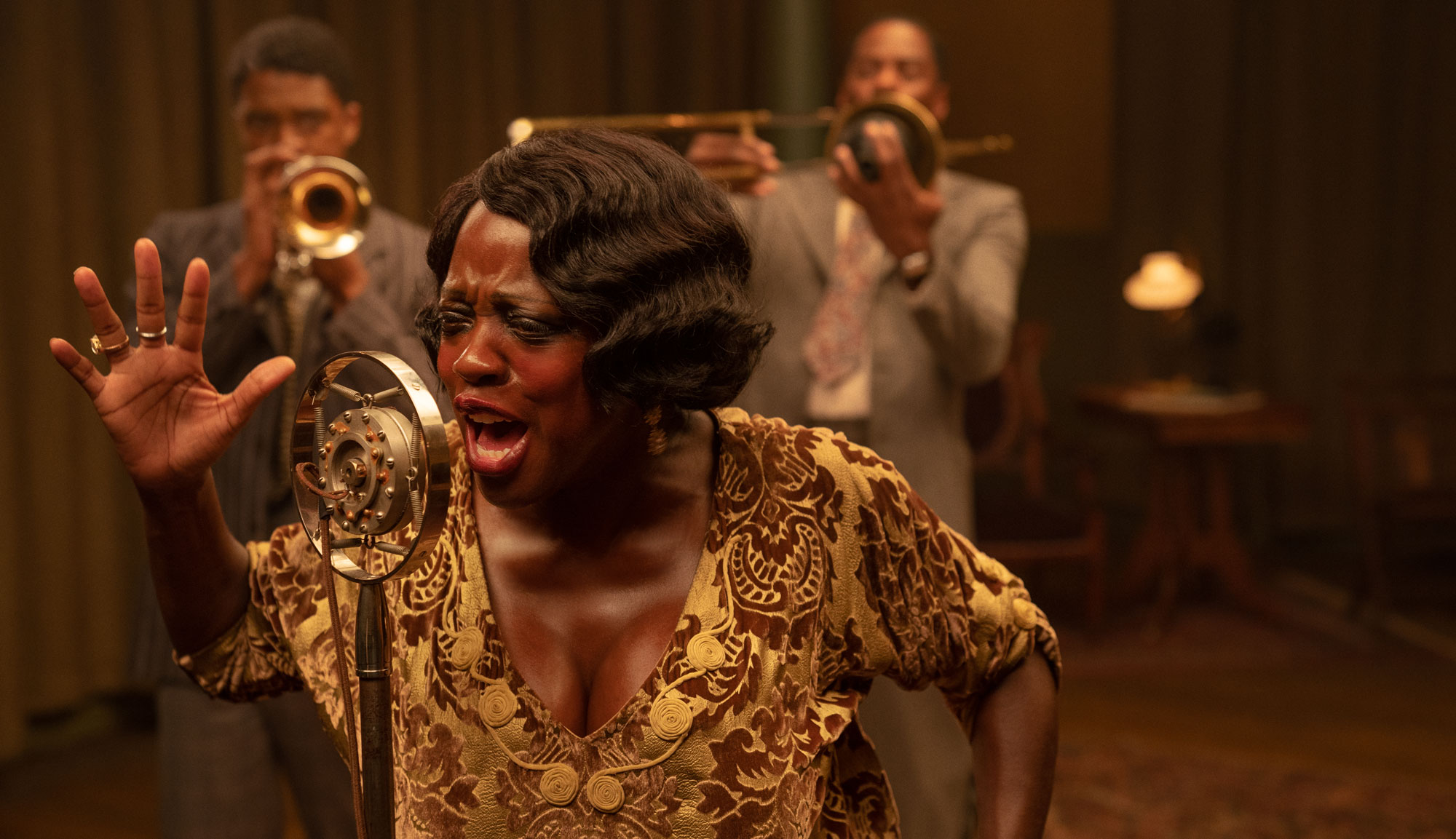 It’s a simple fact that no one is going to watch “Ma Rainey’s Black Bottom” how it was originally intended. George C. Wolfe’s adaptation of the August Wilson stage play must have been conceived as a celebration of black history and culture through a story focused expressly on black excellence, an opportunity for Chadwick Boseman to show more of his range and another opportunity to see Viola Davis bring Wilson’s words to life on the big screen. It’s still all of those things, of course, but with Boseman’s surprising and tragic passing over the summer, the film suddenly became the final performance of a man taken from this world far too soon.

Boseman plays Levee, a young upstart trumpet player in the backing band of Ma Rainey (Viola Davis). In between dates in Chicago with their white manager, Irvin (Jeremy Shamos), in tow, the band visits a recording studio run by another white man, Sturdyvant (Jonny Coyne). As the band arrives, including trombonist Cutler (Colman Domingo), pianist Toledo (Glynn Turman) and bassist Slow Drag (Michael Potts), they begin their rehearsals and tensions immediately rise. The late arrival of Ma, combined with her fearless and domineering demeanor, doesn’t exactly cool things down, and the tiny little tinderbox of a studio, already boiling over in the summer heat, seems ripe for an explosion. As Ma’s demands become increasingly histrionic and Levee’s ego continues to swell, the rest of the band tries desperately to keep everything together.

In his final performance, Boseman is electric from the first frame. Levee is defined by his passion, his individualism and his belief in his own excellence. Where others are content to keep their heads down and do what is asked of them, Levee sees an opportunity to assert himself, consequences be damned. Indeed, most of the film is spent waiting with bated breath for exactly when those consequences will arise. It’s not a question of if but when. Such an approach suits Boseman well, as he has the charisma to keep himself in the game long after a lesser man would have been thrown to the street for his actions.

Davis is equally monolithic in her portrayal of Ma, looming over the entire picture whether present in the scene or not. She’s often the driver of the conflict, raising tensions in the studio by showing up late and demanding her stuttering nephew provide the spoken word intro for the film’s eponymous track. She’s a woman who knows what she wants and can get what she wants, even if it means actively disrespecting white men in the 1920s — no easy feat even in a northern city like Chicago. This is her second earth-shattering performance in a filmed Wilson play in the last five years, and yet it could not be more different than her approach to “Fences.”

The two leads certainly shine the brightest and usually succeed in dominating the room every chance they get, but this is by no means a two-hander. Each member of the small ensemble has a vital role to play, from Domingo’s fruitless attempts to play peacekeeper to Taylour Page’s flirtatious glances further stirring the pot to Shamos and Coyne’s feckless attempts to restore order. Wolfe doesn’t overplay his hand, avoiding the common pitfall of trying to spice up a stage play by artificially widening the scope or inserting additional outdoor scenes to make it feel less like a filmed production. There are a few moments spent in the outside world, but the play is about the claustrophobia of being stuck in a tiny room with these two outsized personalities on a collision course with each other.

And as “Ma Rainey’s Black Bottom” races to its climax, as Boseman performs a staggering monologue about the nature and needlessness of religious belief when confronted with a world so cruel and a race so persecuted, the tiny rehearsal room grows even smaller until it’s more of a pressure cooker than a converted locker room. Even the studio itself, far more spacious in its own right, shrinks in the presence of Ma’s sneering perfectionism and Levee’s combustible insolence. Sometimes the easiest thing to do is to know that your material and casting is good enough and let that carry the day. That’s certainly the case here, but Wolfe helps his own cause by keeping the camera from straying from his stars.

Very few actors get to choose their final performance. Those who live long enough have far more likelihood of doing so, but for the young, their final performance is usually more a case of happenstance than grand design. For someone like Boseman, living with a likely terminal illness for some time, it’s entirely possible that he was looking at his 2020 performances as some of his last, if not the last. Considering that, he’s picked a hell of a way to go out, first with Spike Lee’s “Da Five Bloods” and then with “Ma Rainey’s Black Bottom.” It’s a cliché to say that he saved the best for last, especially since it’s unlikely he knew this would be his last performance, but there’s no denying that this will be remembered as the best performance he gave in his too-short career. Just like “Fences,” “Ma Rainey’s Black Bottom” is not only an acting showcase but a profound and powerful look at the lives of black people in a particular time. This film is arguably even better, taking advantage of its tight timeline and condensed setting to create an undeniable tour de force.