Trending
You are at:Home»Vices»Five Things to Know About Siya Kolisi

You know the name, but just how well do you know Siya Kolisi the person?

Welp, we’re about to find out. We’ve gathered five lesser-known facts about one of the best rugby players in all of the world, who just so happens to captain the South African national team. 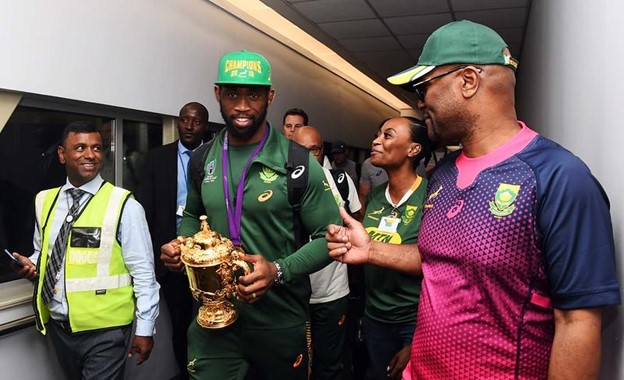 “Spingboks arrive at OR Tambo Airport after 2019 Rugby World Cup Yokohama, Japan” by GovernmentZA is licensed under CC BY-ND 2.0

Fact #1: No Overnight Success In Rugby

Some people look at Kolisi and see nothing but success — a 2019 Rugby World Cup championship, magazine articles anointing him one of Africa’s most-influential people, amongst others.

However, that success was a slow roast. Long before leading South Africa to its third-ever World Cup (a 32-12 clobbering over England), Kolisi struggled to even get on the field at the 2015 competition. A 24-year-old Kolisi played only two games — in all of 30 minutes — for the Springboks in the 2015 World Cup before the country was eliminated in the semi-finals.

The takeaway? You have to earn your stripes. And that’s exactly what Kolisi did, progressing little by little before being anointed national team captain in 2018 — the first black player to earn the honor.

Long before he ever walked into a rugby pitch, Kolisi struggled just to get by. He was raised by his grandmother in the township of Zwide. He was one of seven living in a two-bed house, which forced him to sleep on the floor more often than not.

School was an escape for Kolisi. For one, he was guaranteed at least one square meal there. But two, that’s where he first crossed paths with a rugby field. And as they say, “the rest of history.”

The experience hardened a young Kolisi, toughening him up for a rough sport like rugby. Looking back on the experience, Kolisi has been quoted as saying, “no matter where you come from, or what your background is, you can aspire to be anything.” He is living proof of that line.

Kolisi has become one of the faces of rugby, as the sport continues to climb in popularity worldwide. The sport has become a prominent fixture on TV screens and online betting sites that you can find on Sportsbook Bonus, for example.

Some of that popularity definitely stems from Kolisi’s appeal. He’s inked multiple sponsorships from big-name brands such as adidas and Roc Nation.

On Instagram, he’s accumulated just under 550,000 followers under his user handle @siya_kolisi_the_bear. Yes, he’s well-known by the “The Bear” moniker.

Fact #4: Being The Voice Of The Voiceless

Some players that reach Kolisi’s global stature succumb to the perks that come with it — money, fame, attention, and so forth. Not Kolisi, however.

Instead, he’s consistently pledged to use his voice to inspire change for those less fortunate. Take this quote he gave Red Bull energy drinks, “you must never think your contribution is less than someone else’s. Everyone can do something good — no matter how small. I believe we need to stop complaining about what is wrong with South Africa and ‘living’ the South Africa we want to see.”

Pay special attention to the final sentence. Now ask yourself, are you complaining or setting the bar for fellow countrymen? Kolisi is doing the latter, and with worldwide acclaim, too.

Just months ago in March, Kolisi and his wife, Rachel, launched the Kolisi Foundation. Per the org’s website, the foundation’s mission is to “change the narrative of inequality for people in vulnerable and disadvantaged communities in South Africa by providing assistance and opportunities through partnerships.”

One of the first initiative’s of the foundation was COVID-19 relief. The organization sent tons of masks, goggles, and hand sanitizer to hospitals in Cape Town and Port Elizabeth once the pandemic unfolded. Negative side effects resulting from the pandemic especially hit home for Kolsi, who understands the struggles of being locked in a cramped home with little resources.

Kolsi has grander visions for his foundation, too. He also has initiatives to bring solar lights to rural areas, feed the starved, strengthen education for children, amongst many other projects. Expect to hear many more stories about Kolsi creating lasting change in South Africa using this foundation.