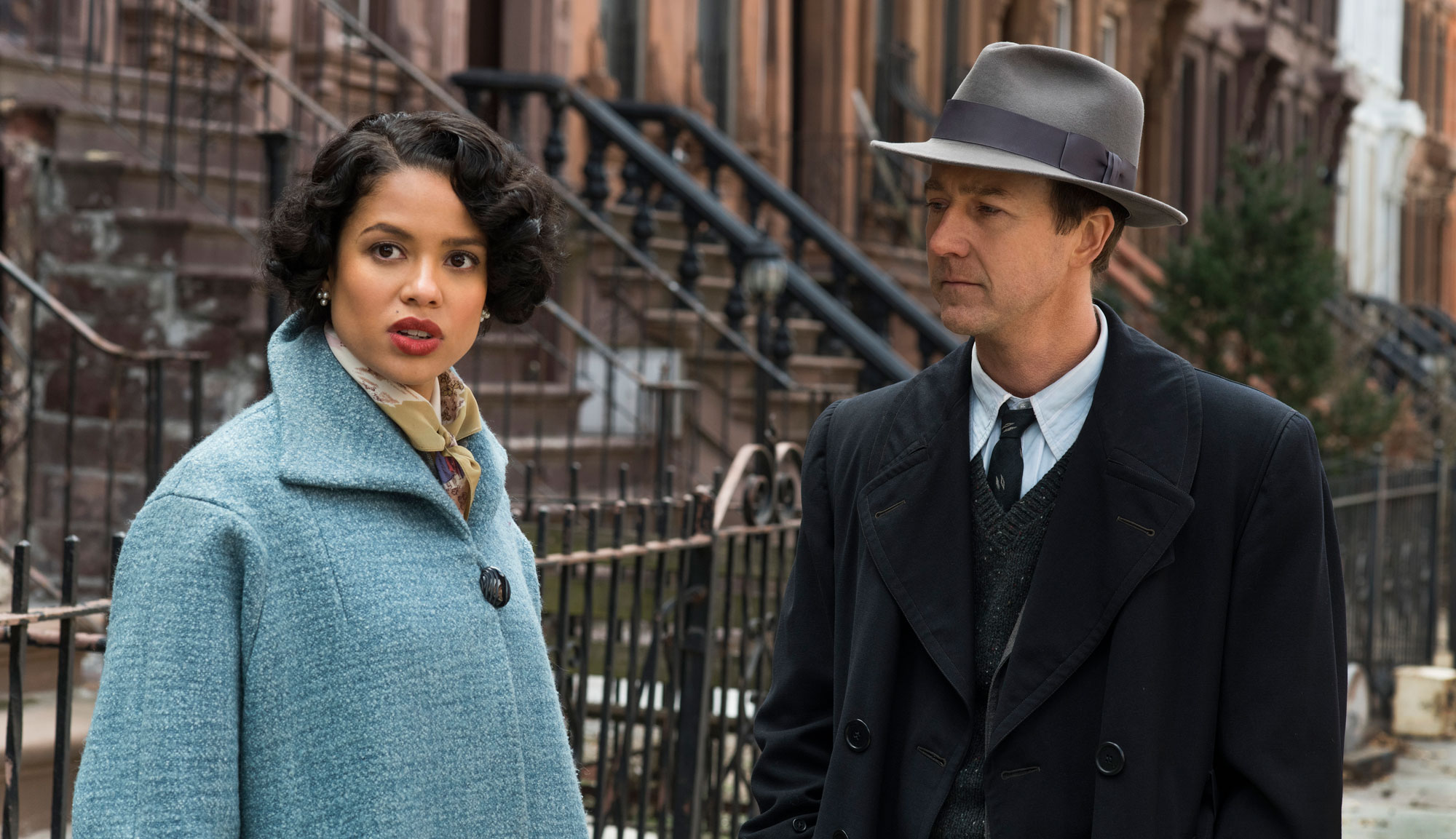 You’d think that Edward Norton would have directed more movies by now. The famously exacting actor who has made headlines for demanding and sometimes wresting creative control away from his directors on films like “American History X,” “Red Dragon” and “The Incredible Hulk” has only stepped into the chair himself on one occasion – the completely forgettable rom-com “Keeping the Faith” nearly 20 years ago. And he didn’t write the script for that film, so it wasn’t entirely his. For someone who seems to have such a specific and borderline perfectionist view of the art he creates, it’s surprising that he hasn’t taken the reins more often himself.

Now, we have the opportunity to see what Norton is truly made of as an artist as he writes, directs and stars in “Motherless Brooklyn,” an adaptation of a 1999 novel by Jonathan Lethem. Moving the setting to 1950s New York, the film places itself squarely in the film noir tradition – a hard-boiled mystery whodunnit with far more twists and turns than you might initially expect. It centers on Lionel (Norton), a young and idealistic private eye working for his mentor, Frank (Bruce Willis). Lionel has Tourette Syndrome, but that doesn’t get too much in the way of his work. When Frank is killed under questionable circumstances, control of the agency falls to Tony (Bobby Cannavale), who allows Lionel to investigate further. He begins to uncover a vast, interconnected series of events revolving around a young woman (Gugu Mbatha-Raw) working to counteract the aggressive redevelopment efforts of a construction magnate (Alec Baldwin).

On first blush, “Motherless Brookyln” feels quite a bit like a New York-set “Chinatown,” and there are plenty of reasons for that. Baldwin’s public works background screams Noah Cross, and while the concept of the private eye who gets in too deep and winds up on the wrong end of some thugs is a recurring one, the modern blueprints all point to “Chinatown.” Baldwin sprinkles plenty of Donald Trump in his mannerisms and approach, which seems particularly timely (and a bit of good luck considering Norton has been trying to make this for close to two decades), and he’s both sufficiently slimy and tinged with that idealist utopian futurism that makes him a leader of men.

However, it’s really all about Norton. The Tourette’s was a heavy focus of the film’s ad campaign, possibly as a Best Actor play (the Academy has at times been known to love a disability), and in large doses cut together, it comes off as deeply problematic and embarrassing for all the wrong reasons. But in balance, the vocal and physical tics are just a trait of his personality instead of the definition of it. There’s plenty of narration in the film noir tradition, all of which is unburdened by Lionel’s condition (which makes sense because it’s not like he thinks in tics), and it’s here that Norton shines the most. He’s always been a gifted and magnetic actor, and his penchant for deadpan delivery adapts well to the noir genre.

Norton was shrewd in employing veteran cinematographer Dick Pope, who previously worked with him on “The Illusionist.” He’s perfectly at home with the deep shadows and sharp angles of the noir genre, and the look of it all is one of the better aspects of “Motherless Brooklyn.” Daniel Pemberton provides a nice, light jazz score that succeeds in backing up the tension in the film’s more consequential scenes. It’s hard to say what this indicates for future directorial works from Norton, as he hews tightly to the standard expectations of the genre and doesn’t take any particularly notable steps out of line, but he doesn’t make any mistakes either. Film noir has been around for decades upon decades, and Norton isn’t interested in rocking the boat.

Overall, it’s a decent enough genre exercise. Norton has assembled a varied, talented cast that handles the material well, and it’s surprisingly easy to watch, even if the Tourette’s-ness of it all never really stops distracting. It’s laudable that it isn’t the sole focus of the movie, and it’s nice that everyone pretty much accepts Lionel for who he is, but while the movie isn’t about Tourette’s, it still results in these weird tonal shifts. “Motherless Brooklyn” is very much a hard-boiled noir without a ton of levity, but quite a few (if not most) of Lionel’s outbursts appear to be played for laughs. It seems designed to be a jarring experience, but it also ends up harming the overall purpose of the film. It doesn’t ruin it, though, as there’s still plenty to like. Whether “Motherless Brooklyn” announces Norton as the next great actor-turned-director is debatable, as its odd shifts in tone and lack of originality keep it from standing on its own as a great piece of art. But at the very least, it proves that he can execute on an established story. Here’s hoping that he returns to direct again and takes a few more chances because it could be something special.