Trending
You are at:Home»Entertainment»Movies»Movie Review: “Spider-Man: Far From Home” 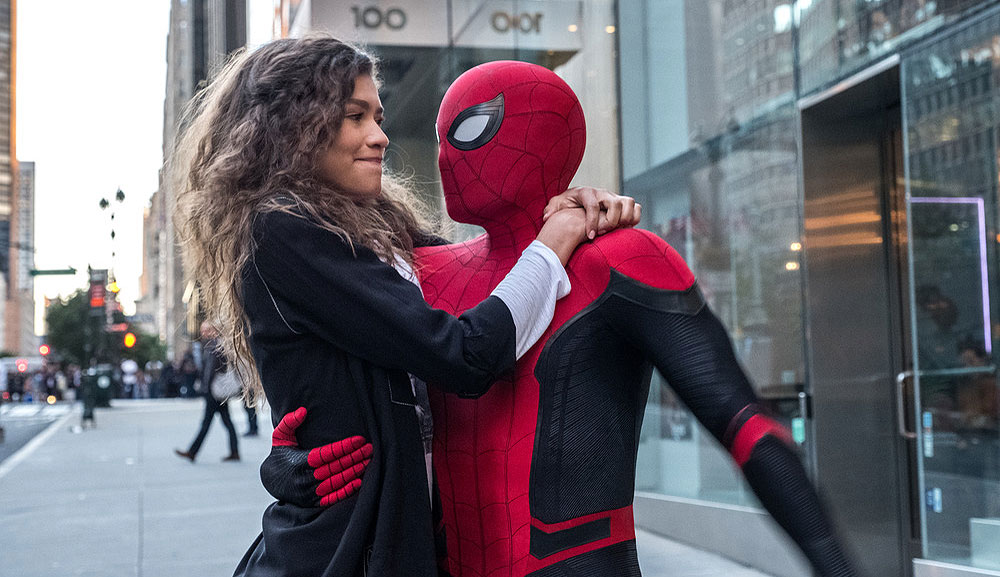 “Avengers: Endgame” cast a giant shadow – not just in terms of box office or breaking through as a cultural touchstone but also for the future of the Marvel Cinematic Universe. Following the epic events of that film, including the deaths of several beloved characters, it was hard to know how the world within the MCU would carry on, but “Spider-Man: Far From Home” is quick to reassure you that while some may be gone, the Marvel spirit is still alive. Directed once again by Jon Watts, “Far From Home” doesn’t have the depth or dramatic elements of its predecessor, but it’s an incredibly fun summer blockbuster full of humor, wit, inventive visuals and engaging action. Though it may repeat themes visited by previous Spidey films, it remains a joyful time in the theater even as it contemplates how loss can affect people.

Peter Parker (Tom Holland) is all set to go on a school trip to Europe, where he’s devised a plan to slowly woo MJ (Zendaya) and kiss her at the Eiffel Tower. Unfortunately, live intervenes in the form of Nick Fury (Samuel L. Jackson), who recruits the young Avenger for a mission to stop otherworldly creatures known as Elementals from wreaking havoc across Europe. The mission is led by Quentin Beck aka Mysterio (Jake Gyllenhaal), a hero from a parallel universe who lost his own Earth to these monsters. Juggling his social life with his superhero duties and sense of responsibility to continue the legacy of the Avengers, Peter squares off against a bunch of surprising foes as he tries to figure out his place in this world.

Much like the lighter sorbet of “Ant-Man and the Wasp” after “Avengers: Infinity War,” “Far From Home” is certainly a step down in stakes, with an increase in jokes and lightheartedness. That doesn’t mean the movie is void of any tension or danger, but rather that it’s a marked de-escalation from a massive cosmic threat that focuses on more personal dramatic beats. Holland continues to be the best (live action) cinematic Peter Parker/Spider-Man due to an excellent mixture of innocence, hope, angst, humor and constantly screwing up while trying his best to do the right thing. Returning writers Chris McKenna and Erik Sommers provide plenty of heart and laughs while finding ways to make Peter’s life increasingly complex and chaotic.

In fact, the whole cast shines in this film, as everyone is given good quips or memorable moments. Jon Favreau fares well as Happy Hogan, the still-flustered presence in Peter’s life, although there is certainly a growing respect from previous films; Marisa Tomei’s Aunt May delivers some appropriately awkward adult jokes while still offering plenty of good advice to her struggling nephew; and Gyllenhaal pairs dashing heroism (what better use of that jawline?) with scenes of the petty mania he displayed in “Velvet Buzzsaw” and “Okja.”

Watts has matured in his staging as well, impressively going from the minor action beats in “Clown” and “Cop Car” to creating inventive, kinetic sequences and fun bits of imagery that fully embrace Spider-Man’s comic book origins, like using first-person POV shots and seemingly drone-mounted cameras to take in the beautiful European sights. It’s a visually engaging film that never has a dull moment – not because of the non-stop explosions but in the way it alternates between character-based comedy and impressive action scenes. It’s constantly moving forward at a clip without feeling breathless or rushed yet is completely absorbing to the audience.

The only real issue with the film, and it’s a minor gripe, is that the underlying theme is the same as every other Spider-Man movie – how Peter fits in, how he balances the two sides of his life, and his role in regards to his idols and loved ones. Part of that is the nature of the character and his origins. Peter is a teenager who is literally defining himself while also being one of the only heroes in the MCU proper to have a secret identity. However, it just feels like it’s becoming a well that writers have consistently gone to from the Raimi era right up to last year’s “Into the Spider-Verse.” It’s not a bad theme, and it’s fitting for the character, but watching scenes where Spider-Man wrestles with the same issues across eight movies is starting to feel stale.

“Far From Home” is a good follow-up to “Endgame” because it’s quite different in scope, tone and focus. It acknowledges that things have changed for these characters in ways that no one was ever prepared for but that there are still steady hands guiding the ship. It’s not deep or as moving as other Marvel movies, but it is a lot of fun at the theater and a peek into what happens next amidst the chaos. Quips, thwips and backflips are the entertaining highlights of the film, but the real engine is the heart and warmth of the Marvel heroes that many have adored for so long.