Trending
You are at:Home»Entertainment»Movies»Movie Review: “Glass” 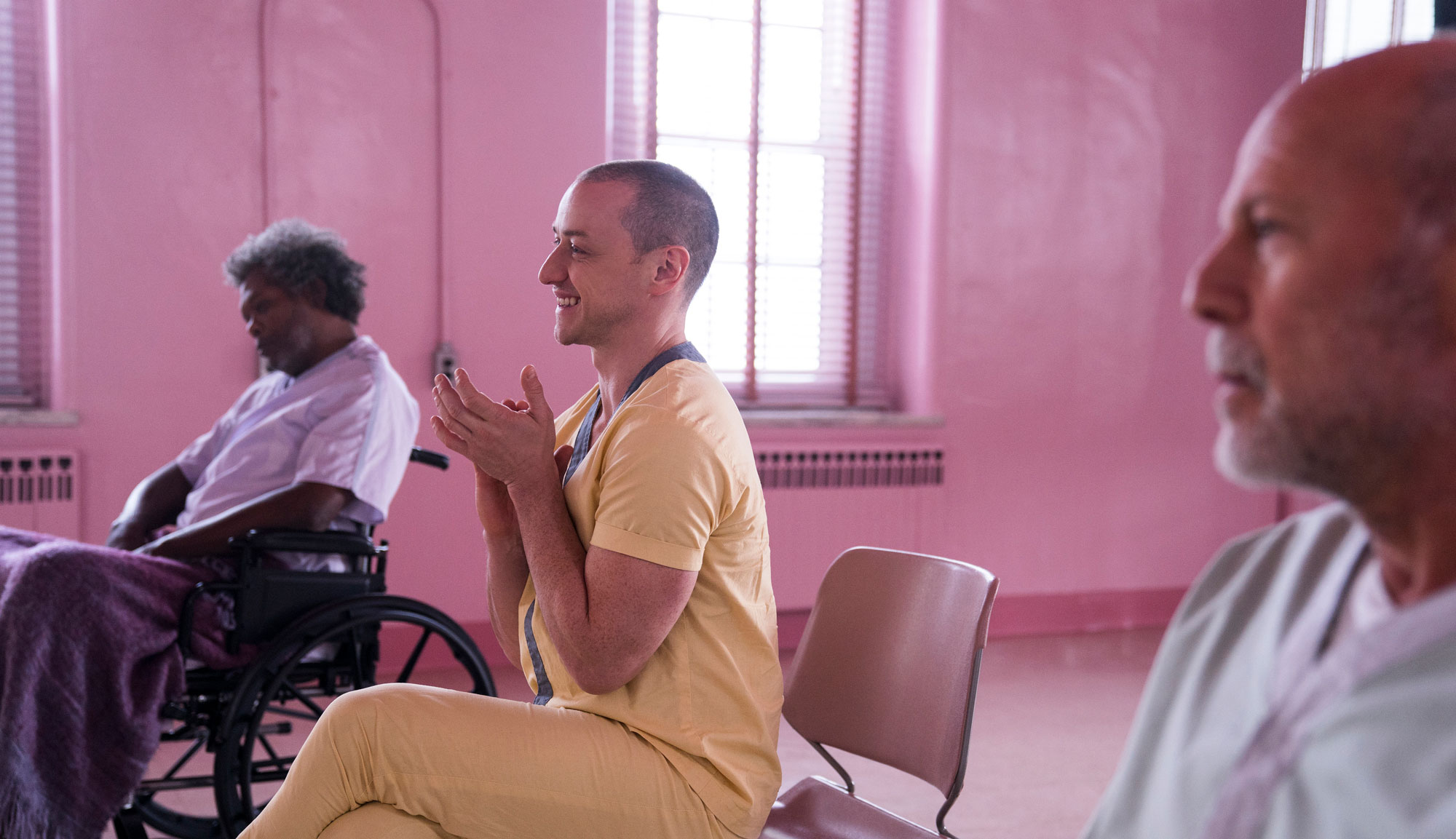 In hindsight, we probably should have seen “Glass” coming. Even with the fall from grace that director M. Night Shyamalan endured through the likes of “The Happening,” “The Last Airbender” and “After Earth,” superhero movies are just too culturally omnipresent to avoid returning to the universe of his real-world superhero drama, “Unbreakable.” Of course, the way Shyamalan managed to do it by quietly making “Split,” his big comeback film of 2017, into a backdoor sequel to “Unbreakable” with a shock final scene isn’t exactly what anyone expected coming out of that movie, but the fires had been stoked, and the success of “Split” made a full-blown, universe-colliding sequel inevitable. And thus, two years later, we have “Glass.”

So named after the antagonist of “Unbreakable,” Samuel L. Jackson’s disabled, megalomaniacal comic book obsessive Mr. Glass, nee Elijah Price, the film sees Shyamalan bring back James McAvoy’s Kevin, aka The Horde, and put him on a collision course with both Mr. Glass and the returning David Dunn (Bruce Willis). David runs a security company with his son Joseph (Spencer Treat Clark, all grown up) and is still committed to a life of vigilantism at night as he stops petty criminals by beating the living hell out of them. That has raised the ire of the cops, and when David comes face to face with The Horde after foiling another kidnapping plot, the police manage to apprehend both superpowered beings and bring them to a mental hospital (which also happens to be holding Elijah Price) under the watchful eye of Dr. Ellie Staple (Sarah Paulson). She wants to prove to them that their belief in their own powers is simply a case of delusions of grandeur.

“Unbreakable” came to us at a time before superheroes were the omnipresent force that they’ve since become. “Batman and Robin” had killed the whole concept, and “X-Men” had only just started the rehab process. But “Unbreakable” sets itself apart even today, recontextualizing superheroes through the lens of the real world, where heroes are just guys who happen to be a little stronger than others, a little luckier and a little more durable. And it wasn’t some grim, gritty “Watchmen”-style deconstruction either. “Split,” on the other hand, is an acceptable if unremarkable horror/suspense film elevated by the sleight of hand that exhumed “Unbreakable” 17 years after most people forgot about it. So how does M. Night Shyamalan bridge that gap to make “Glass” a worthy successor to both films? Unfortunately, it becomes clear pretty quickly that the answer is, it doesn’t.

It’s notable that a movie featuring both Bruce Willis and Samuel L. Jackson sees James McAvoy receive top billing, but from a volume of acting perspective (as well as the recency of “Split”), it’s easy to see why. Just like in “Split,” McAvoy pinballs from character to character, aided by a rather absurd “hypnosis light,” but the nuance is all gone. Instead, he simply preens and flails all over each of his scenes, suffering from an acute case of diminishing returns as his shtick wears out its welcome before the end of the first act. It doesn’t help that he so often lands on the character of Hedwig, the nine-year-old with a lisp who’s both the most outsized and least interesting of all of Kevin’s personas (clearly Shyamalan thinks he’s funny. He’s not). Willis seems barely conscious, only managing to look alive during flashbacks to the “Unbreakable” era, while Jackson spends much of the film as a mute, sedated to hell and back with a mostly vacant expression that belies his obviously nefarious intentions. The rest of the cast doesn’t fare any better, especially poor Sarah Paulson, who is saddled with an endless parade of psychobabble and exposition.

Shyamalan’s biggest sin, it seems, is believing his own hype. “Split” was made with barely any budget by Blumhouse, the sort of studio that’s more than happy to throw these ideas against the wall and see what happens. But “Glass” is something else entirely; it’s Shyamalan’s grand opportunity to make statements about comic books and superheroes in an era when they’ve taken over the world. “Unbreakable” worked because it kept itself grounded in reality. “Split” worked because it was a parlor trick. “Glass” tries to straddle both worlds and repeatedly falls on its face with alarming regularity. Granted, it’s not all bad. Shyamalan still has a keen eye for shot composition and manages to eke out a bit of suspense from time to time, but so much of “Glass” feels pedestrian, too convenient and too coincidental.

This is not the first time that Shyamalan has been defeated by his outsized belief of his own cleverness, nor assuredly will it be the last. It’s clear that he wholly believes “Glass” is the deconstruction of the genre and its concepts that he’s been wanting to say for the last 19 years, but we’ve been living in the era of the superhero for just as long. He plays with the form and the clichés of the genre, but we’re at least half a decade beyond that being novel. He has become the comic book nerd par excellence, explaining the plot mechanics and motives with absurd detail, oblivious of how exhausting he is to everyone around him. Maybe this would have meant something if “Unbreakable” were a bigger success and this movie had come out in 2002, but the resurrection of its corpse proves without a doubt that David Dunn and Mr. Glass should have stayed dead and buried.