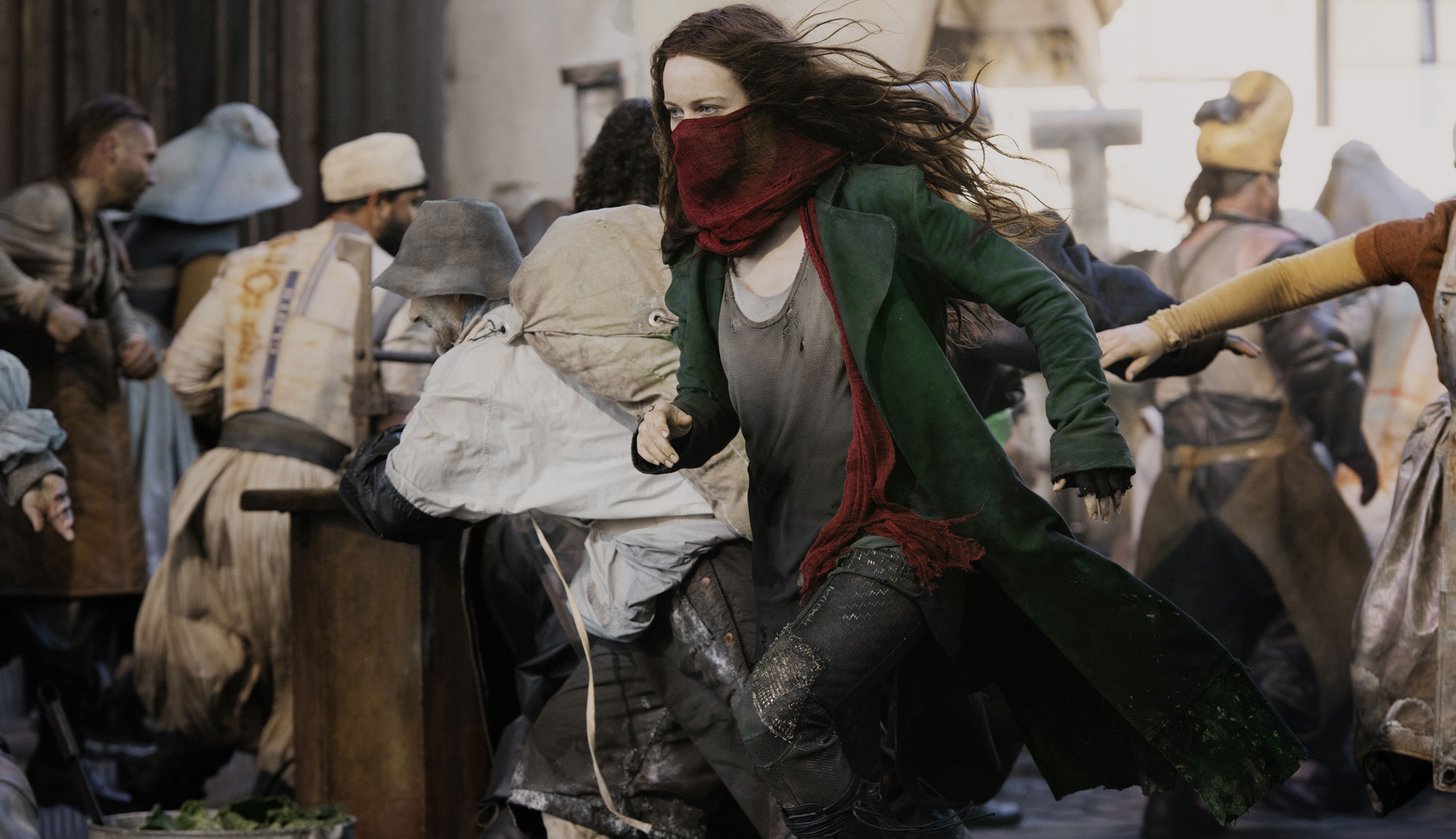 December is usually the time of year that the movie world is dominated by a mix of prestige dramas with awards aspirations and family fare designed to take advantage of the holiday season. Increasingly, though, the major studios tend to find room to sneak a blockbuster or two onto the schedule – an opportunity to offer some counterprogramming to those who love big movies with big budgets and big spectacle. Universal is banking on exactly that sort of success with the release of “Mortal Engines” from Peter Jackson’s studio, WingNut Films.

Based on the book by Philip Reeve, “Mortal Engines” imagines a world in the far-flung future where weapons of mass destruction have crippled the Earth and certain cities have turned into mobile battle tanks in an attempt to survive. The biggest and baddest of these cities is London, led by Valentine (Hugo Weaving), whose lust for power drives his every move. He eventually runs afoul of Tom (Robert Sheehan), who accidentally witnesses him attempt to murder a mysterious young girl, Hester Shaw (Hera Hilmar), and is banished from London to assure Valentine can cover his tracks. Forming an uneasy alliance, Hester and Tom soon discover Valentine’s plan to build a super weapon and destroy the shield wall protecting Shan Guo, a peaceful land of non-mobile cities he sees as rife for pillage. They team up with Fang (Jihae), a hotshot pilot with the resistance, to take on Valentine and end things once and for all.

Director Christian Rivers has never helmed a feature himself, but he’s no stranger to the world of big budget movies. Rivers has been working with Peter Jackson for nearly his entire career, storyboarding all of his movies since “Braindead” and working extensively on visual effects for all of his films. It’s safe to say that, after working on the “Lord of the Rings” and “The Hobbit” films, he would feel completely at home with a movie of the scope and scale of “Mortal Engines.” And from the perspective of a visual and storyboard artist, it’s easy to see where his talents lie. Rivers was given a $100 million-plus budget, and that money is clearly visible all over the screen. The size of these giant cities rumbling across an arid countryside is the sort of sight designed for the big screen, and when it comes time for action, he blows things up but good. It’s clear where his expertise lies.

This is the danger you run with a visual effects supervisor turned director. The visuals of “Mortal Engines” are undeniably impressive, but they barely cover the tremendous shortcomings of the script. There was a time when Jackson, Fran Walsh and Philippa Boyens would have been considered a feather in the movie’s cap, but their penchant for epic, exhaustive storytelling and hero’s journey clichés fails to play well with a director who couldn’t care less about the story or characters if he tried. The movie’s world-building is generally reduced to word salad phrases like “Municipal Darwinism” and “anti-tractionists” that sound important but mean absolutely nothing. The result is a script deeply convinced of its own cleverness and gravitas that’s executed with the skill of a SyFy original movie. The characters are lifeless piles of archetypes, the love story is completely unbelievable, and while Hugo Weaving gets to sneer and mug his way through the movie as its central villain, nothing ever matters in the slightest. It doesn’t feel lived-in or natural; it’s a theme park ride.

It may be a tad cynical to note the importance that China plays in the film’s climax. Well, not a country named China, as this world is long since past that, but the protagonists are racing to save a Great Wall protecting the sovereign, peace-loving people of clear Chinese descent, so it’s not all that difficult to connect the dots. Blockbusters are increasingly becoming globally focused, with the Chinese market an easy route to success even if a movie fails in the States. It’s tough not to think about the third act of “Mortal Engines” as a direct attempt to make this movie a success in China by making them the good guys. Now, that’s not an inherently bad thing if you build out the foundation and make it work, but the plot design of “Mortal Engines” is so slapdash that there’s no sense of who these people are or their motivations, making them amount to nothing more than their race and a foil for the bad guys. As such, the final battle has no stakes or excitement. There’s no reason to care about these people other than their existence as the opposition to Weaving’s cartoonish villain. It’s the sort of lazy storytelling that almost feels like cultural appropriation, especially when the soldiers arrive in the final scenes wearing a steampunk version of traditional Chinese armor.

In practice, “Mortal Engines” is exactly as dumb as it seems to be on the surface. There’s plenty of room for dumb action movies, and the “Fast and Furious” franchise has proven that those movies can be both fun and outrageously profitable, but Rivers’ film fails because it wants to be more than that. It wants to tell some sweeping story in the grand tradition and turn it into a franchise akin to “Star Wars,” whose plot it cribs from often. Unfortunately, none of it works or resonates. The explosions are cool and the tank cities are well-designed, but it’s all sound and fury. A film like “Mortal Engines” should be a breath of fresh air, the antidote to the litany of superhero movies and endless sequels. Its complete inability to capitalize on that space is a huge disappointment indeed.