Trending
You are at:Home»Entertainment»2018 Holiday Gift Guide: Movies and TV 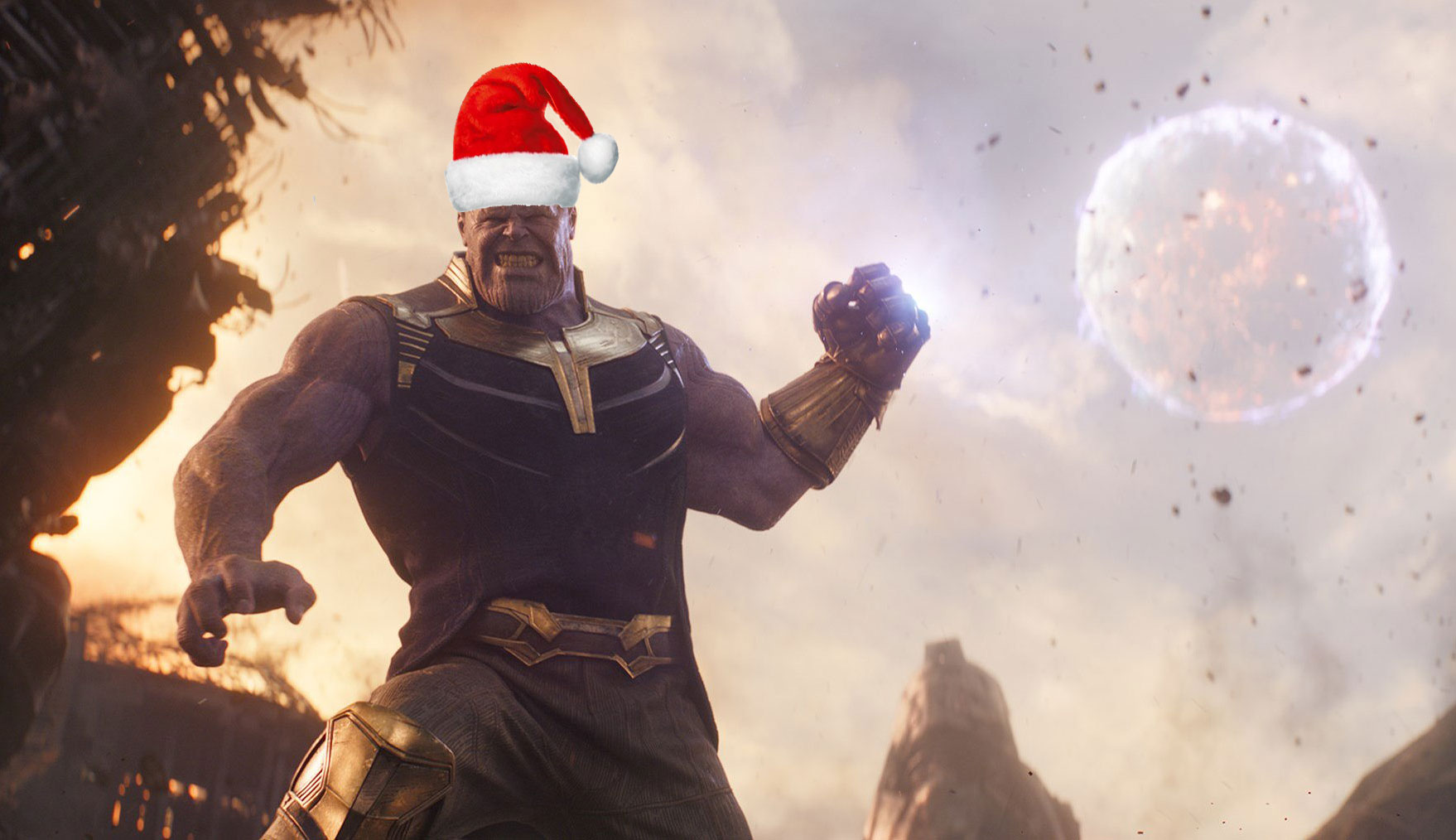 The holidays are upon us once again, which means it’s time to stress out about what you’re going to buy everyone on your shopping list. Fortunately, we have plenty of great ideas for the movie buff or TV fan in your life with some of our favorite Blu-ray and 4K releases from the past year. Check out our suggestions below and click the cover art for easy-to-buy links to Amazon. 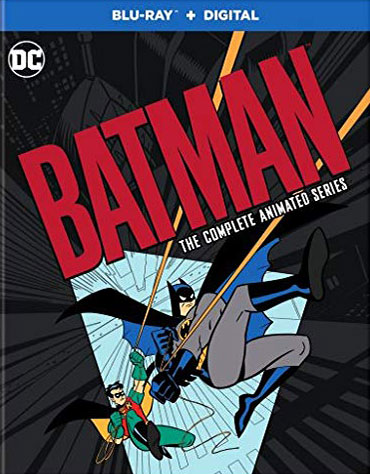 For many comic book fans, “Batman: The Animated Series” is the greatest superhero show (animated or otherwise) ever produced, so it’s not a surprise to learn that fans were so excited about the show being digitally remastered and released on Blu-ray that the initial run of limited edition box sets sold out. (Don’t worry, they made more.) Featuring all 109 episodes as well as the companion films “Batman: Mask of the Phantasm” and “Batman & Mr. Freeze: SubZero,” the 12-disc set is the perfect gift for anyone suffering from Batmania, especially younger audiences who haven’t had the pleasure of hearing fan favorites Kevin Conroy as Batman and Mark Hamill as The Joker. Also included is a brand new documentary about making the series and much more. Just don’t wait too long to pick up a copy or you might miss out. 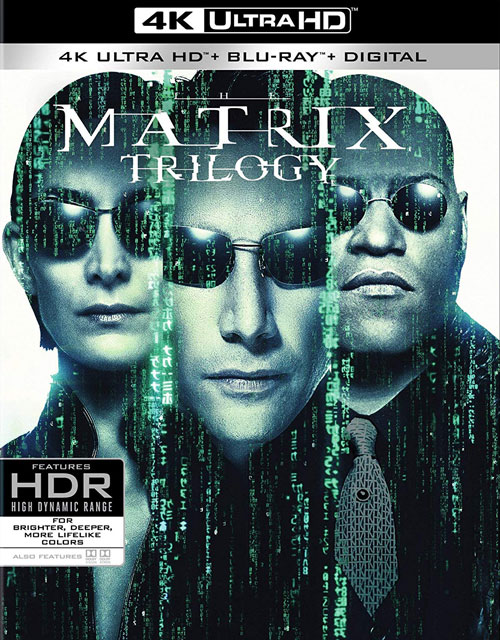 Though the “Matrix” films have gotten a bit of a bad rap in the years since their release (especially the 2003 sequels “The Matrix Reloaded” and “The Matrix Revolutions”), the Wachowskis’ sci-fi trilogy remains one of the most influential movie franchises in recent history. The visual effects still hold up really well today, while stars Keanu Reeves, Laurence Fishburne and Carrie-Anne Moss have never been cooler. If you haven’t revisited these films in awhile, you should definitely put aside some time for this remastered 4K box set supervised by director of photography Bill Pope. The movies pop off the screen with brighter, deeper and more lifelike colors, while the Dolby Atmos soundtracks have been remixed specifically to make the most of that fancy new home theater system on your wish list. 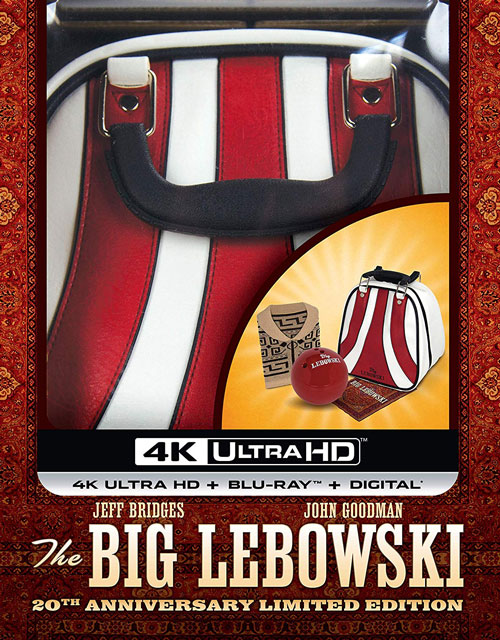 “The Big Lebowski” isn’t Joel and Ethan Coen’s best film – it may not even be among their top three – but its cult status has continued to grow throughout the years thanks to its sharp dialogue, colorful cast of characters and memorable performances, none more so than Jeff Bridges as The Dude. It’s a one-of-a-kind role that Bridges plays to perfection, imbuing the laidback slacker with a goofy charm that’s hard to ignore. And now you can watch The Dude’s misadventures over and over again in glorious 4K with the release of this new 20th anniversary limited edition, which includes a collectible bowling bag and other fun knickknacks that diehard fans will appreciate. Just be careful of thieves, because this exclusive set really ties the room together. 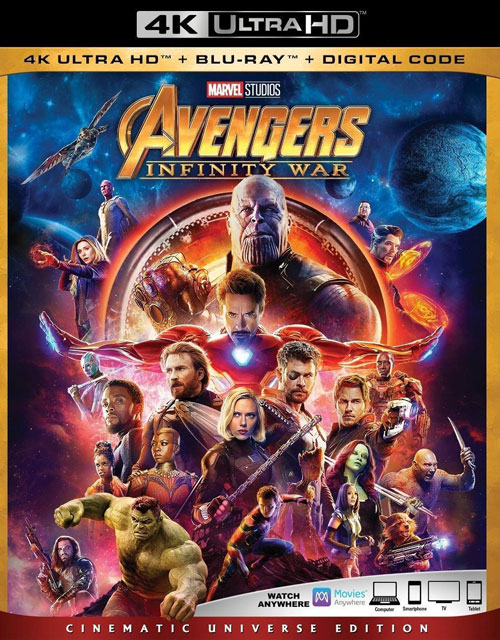 “Avengers: Infinity War” is the culmination of everything that the Marvel Cinematic Universe has been building towards for the past decade, and it sticks the landing in sensational fashion… at least until we see how things truly conclude with next year’s still-untitled follow-up. The movie delivers big on spectacle, with several great action sequences that showcase its deep roster of talent, while directors Joe and Anthony Russo make sure there’s still room for brief moments of levity as well as heavier dramatic beats. Though the film is so jam-packed with characters that it was inevitable some heroes would get more screen time than others – and of that group, Iron Man, Spider-Man, Doctor Strange and Thor are the clear standouts – the real surprise is Josh Brolin’s nuanced performance as the genocidal Thanos, which gives the movie an added (and unexpected) emotional depth. 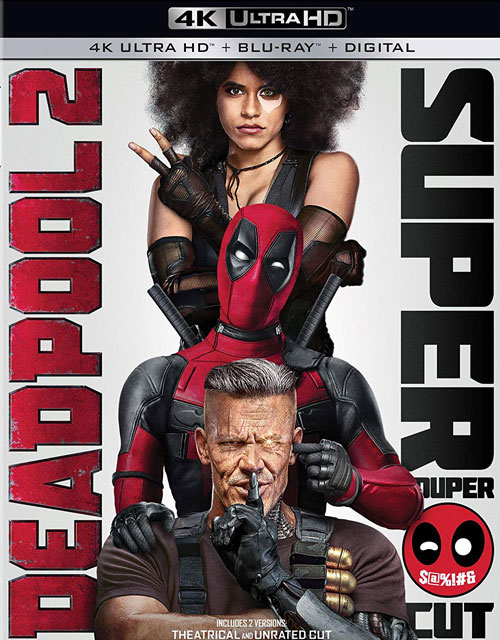 Part of what made 2016’s “Deadpool” such an incredible success was seeing a superhero movie say and do things that audiences hadn’t really seen before. Though “Deadpool 2” isn’t quite as enjoyable without that element of surprise, it’s still a very funny and entertaining action-comedy that hinges greatly on the performances of Ryan Reynolds and series newcomers Josh Brolin and Zazie Beetz. The jokes come so fast and furious that it feels a little desperate at times, and the hit ratio is definitely lower than its predecessor, but the moments that do work are well worth the price of admission. While the movie is undoubtedly flawed – the treatment of Monica Baccarin’s Vanessa, in particular, is downright dirty – the pros far outweigh the cons.

Ant-Man and the Wasp 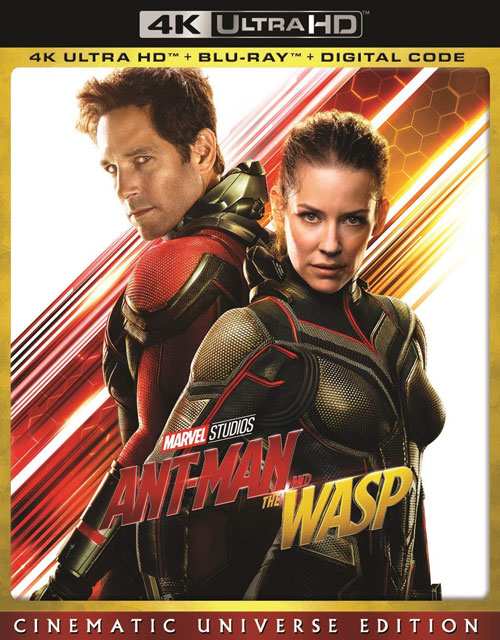 Marvel Studios continues its near-perfect record with this light and breezy follow-up to 2015’s “Ant-Man,” doubling down on everything that made the first film such a success – namely, Paul Rudd’s killer comic timing and some clever visual gags. Though the movie is still woven into the fabric of the Marvel Cinematic Universe, it’s very much a standalone story, and it benefits greatly as a result, especially coming on the heels of the emotionally exhausting “Infinity War.” Hannah John-Kamen’s villain isn’t very memorable, and the final act is a bit long-winded, but the film gets by on the talents of its ensemble cast. Though “Ant-Man and the Wasp” is lesser Marvel to a certain degree, it’s yet another solid addition to the MCU. 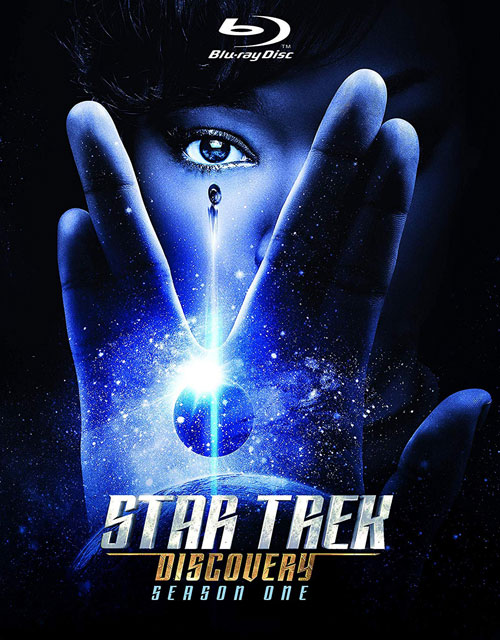 The creators of “Star Trek: Discovery” deserve a lot of credit, because they’ve managed to make a show that appeals to both diehard and casual fans of the sci-fi franchise, and that’s easier said than done. Though some storylines and characters work better than others, the first season of “Discovery” plays out like most new television shows in that you can definitely feel the writers tinkering as the season progresses. With that said, the writing is mostly great with the exception of a few weird choices involving the Klingons, while the cast (particularly Sonequa Martin-Green, Jason Isaacs and Michelle Yeoh) are all fantastic in their roles. “Star Trek: Discovery” isn’t nearly as geeky as previous iterations nor as action-packed as the rebooted film series, but it’s a solid mixture of the two that fans will definitely enjoy. 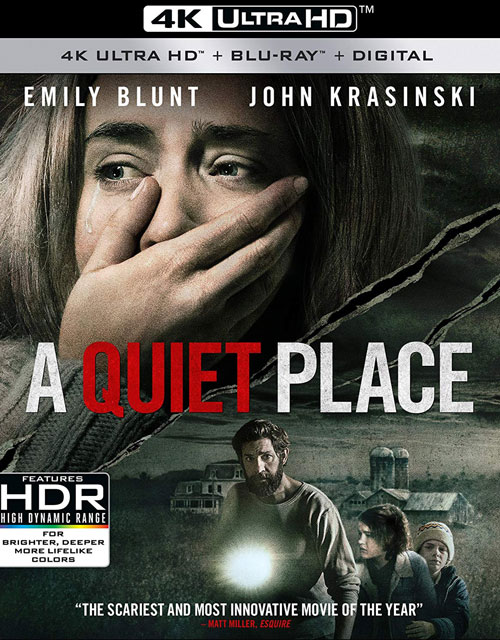 John Krasinski’s latest directorial effort is an incredibly well-crafted genre flick that will likely go down as one of the year’s best films. Equal parts sci-fi/horror and family drama, “A Quiet Place” cleverly uses the guise of an alien invasion story to explore major themes like loss and parenthood, particularly the lengths you will go to protect your kids from the dangers of the world. The reason the movie works so well is because Krasinski makes you genuinely care about the central family and fear for their survival. The acting is great across the board, while the tension never lets up. “A Quiet Place” is a masterclass in genre filmmaking, and the fact that Krasinski pulls it off with minimal dialogue only makes it that much more impressive.

Sicario: Day of the Soldado 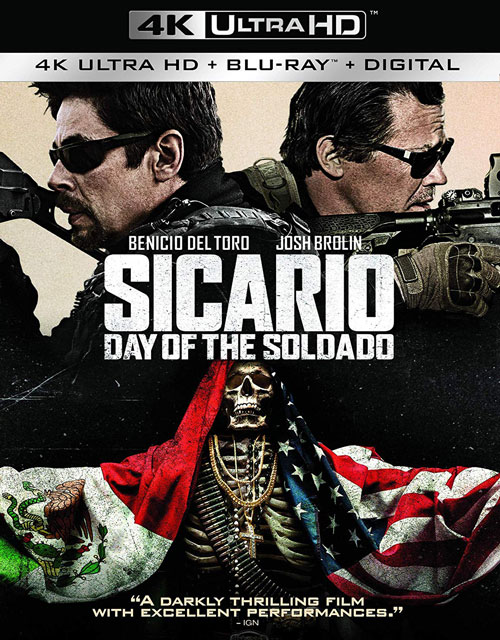 A sequel to Denis Villeneuve’s 2015 thriller “Sicario” may have sounded like a bad idea when it was first announced, but fortunately, “Day of the Soldado” doesn’t disappoint, expanding its predecessor’s examination of the war on drugs to deliver a thematically similar but wholly unique experience. Writer Taylor Sheridan has created yet another compelling story, this time placing Josh Brolin’s CIA operative and Benicio del Toro’s steely hitman front and center. Both actors deliver excellent work once again, while director Stefano Sollima injects his own style without abandoning what made the first movie so great. “Day of the Soldado” is pretty much everything you could want in a sequel, but the fact that it worked at all is the real triumph. 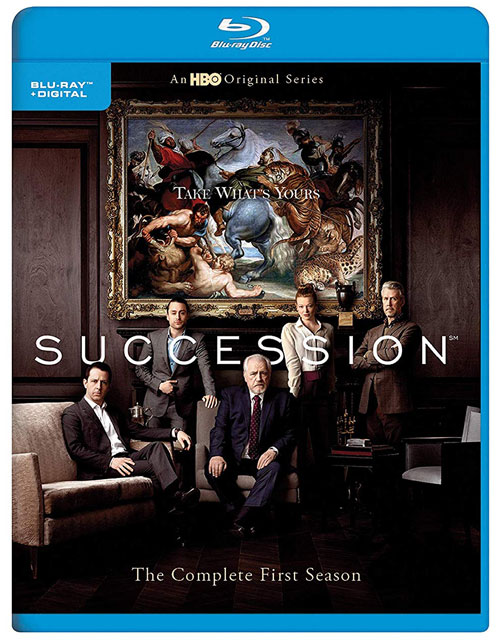 It may not have been one of the buzzier shows of 2018, but HBO’s “Succession” was certainly one of the year’s best. A provocative, biting look at the power struggle within a dysfunctional media dynasty that can turn from brutal family drama to pitch-black comedy on a dime, “Succession” takes a few episodes to get going, but it’s hard not to be drawn into this modern day Shakespearean tragedy filled with crafty characters and razor-sharp writing. It also has one of the best ensemble casts working today. Though Brian Cox will garner most of the plaudits as the aging media tycoon, it’s the actors who play his children – Jeremy Strong, Sarah Snook and Kiernan Culkin – who are the beating heart of the show. “Succession” is prestige TV at its finest, and if you missed it the first time around, now’s your chance to jump aboard. 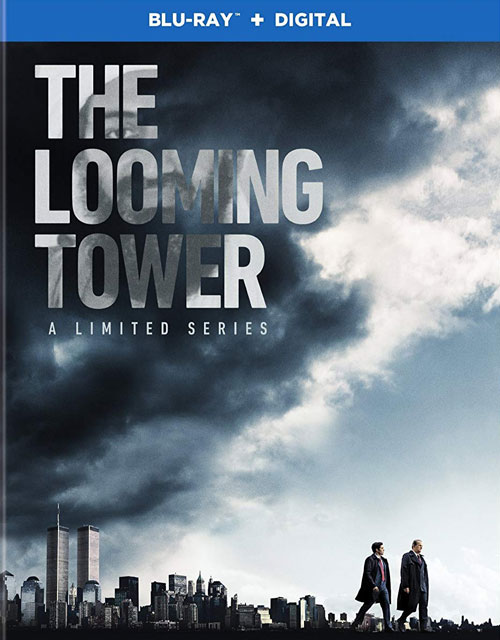 Co-created by Oscar-winning documentary filmmaker Alex Gibney, “The Looming Tower” is a fascinating (and equally infuriating) look at the rise of al-Qaeda and the intelligence community’s negligence in the lead up to the September 11 attacks. The Hulu limited series is particularly interested in the childish infighting that took place between the FBI and CIA during this period, and the poor decision-making by both parties is enough to make your blood boil. Though it’s difficult to watch a show like “The Looming Tower” without reopening old wounds, it’s all executed so well – from the top-notch writing to the performances by Jeff Daniels, Bill Camp, Tahar Rahim and Michael Stuhlbarg – that the attention to detail and respect for its subject matter bleeds off the screen. 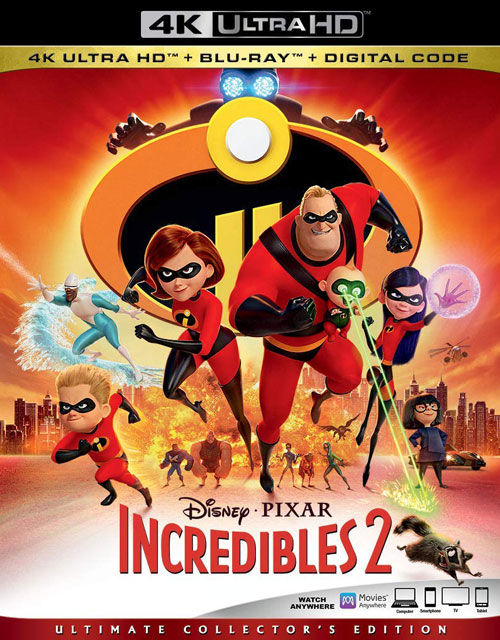 Fans of Brad Bird’s “The Incredibles” have been asking for a follow-up to the Oscar-winning 2004 film since its release. Though it took longer than expected, it was well worth the wait, because “Incredibles 2” delivers in such spectacular fashion that it’s arguably better than the original. The decision to put Holly Hunter’s Elastigirl front and center this time around was really smart, while the film boasts some great action sequences and very funny comedic beats, including Jack-Jack’s fight with a stubborn raccoon, which will likely go down as one of the year’s best scenes. “Incredibles 2” does everything that a good sequel should – it’s bigger and better in every way – but it’s ultimately Bird’s emphasis on character and story that makes it such a success. 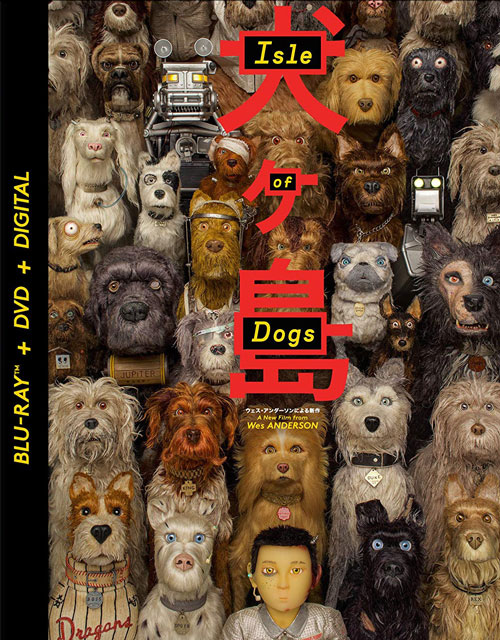 Wes Anderson’s first foray into stop-motion animation, 2009’s “Fantastic Mr. Fox,” is an absolute gem that gets better with every viewing, so imagine our delight when Anderson announced that he would be making another movie in the same format. Though “Isle of Dogs” is a more serious film, it’s just as good as its predecessor, kicking things up a notch both narratively and emotionally to deliver a richer experience. The voice cast is also top-notch, while the animation is visually stunning and well-crafted. Granted, the movie isn’t as culturally sensitive as it could be, but “Isle of Dogs” is an endlessly charming love letter to Japanese cinema and man’s best friend that’s bursting with the filmmaker’s unique personality. 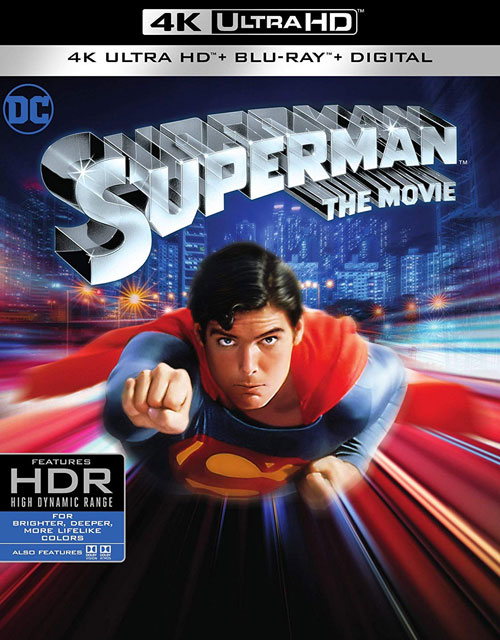 The comic book blockbuster that started it all – Richard Donner’s “Superman: The Movie” – soars onto UHD with a stunning new 4K scan of the original camera negative. Though the picture quality may underwhelm audiences who are expecting an ultra-sharp image, Warner’s presentation preserves Donner and cinematographer Geoffrey Unsworth’s original vision while breathing new life into the 40-year-old film. The movie itself is admittedly a bit hokey, especially compared to the standards of today’s superhero fare, but it still has a certain charm that’s endured throughout the years thanks in large part to Christopher Reeves’ iconic performance as the Man of Steel. Though it would have been nice if the studio had included some new bonus material to celebrate the occasion, the 4K scan is worth the double dip for longtime fans.