Trending
You are at:Home»Entertainment»Blu Tuesday: Mission: Impossible – Fallout and More 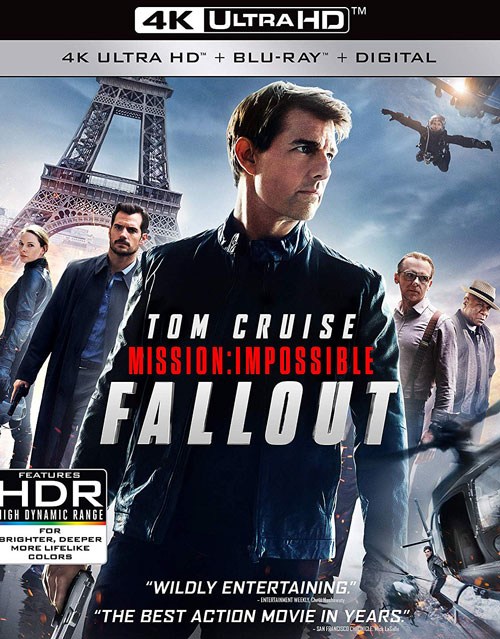 The “Mission: Impossible” series has had a long-standing custom of employing a different director for each new film, but “Fallout” breaks that tradition with the return of Christopher McQuarrie, and it pays off in a big way with one of the best installments yet. Though the movie is perhaps a little too long and complex, it’s also incredibly entertaining, thanks in part to the excellent cast (including series newcomer Henry Cavill as the latest foil for the IMF team) but mainly Tom Cruise, who continues to push the limits of his daredevil stunt work with a series of jaw-dropping sequences – from a HALO jump over Paris to a high-speed motorcycle chase to a bareknuckle bathroom brawl to a climactic helicopter duel. Simply put, “Mission: Impossible – Fallout” is the reason people still go to the movies, because it’s the kind of spectacular but smart blockbuster that warrants the full theatrical experience.

Extras include three audio commentaries (the first with writer/director Christopher McQuarrie and star Tom Cruise, the second with McQuarrie and editor Eddie Hamilton, and the third with composer Lorne Balfe), as well as a behind-the-scenes look at making the film, deleted scenes and more. FINAL VERDICT: BUY

“The Nun” — James Wan’s “The Conjuring” movies are both really good pieces of genre filmmaking, so it’s a shame that the various spin-offs have failed to live up to that same quality. Though “The Nun” is thankfully much better than 2014’s “Annabelle,” boasting a decent mix of jump scares and atmospheric tension, it’s still a messy and largely disappointing entry in the franchise. The story isn’t particularly engaging and seems to be making things up as it goes along, while the film’s antagonist barely features until the last 15 minutes. “The Nun” benefits from having two great actors in the lead roles, but Taissa Farmiga and Demián Bichir can only do so much with the material provided. Extras include featurettes on the title character, location shooting in Romania and how the film fits into the “Conjuring” timeline, as well as some deleted scenes. FINAL VERDICT: SKIP

“The Happytime Murders” — Puppets behaving badly isn’t exactly a novel premise, but it’s one that always feels slightly taboo – and thus ripe for humor – due to our generalized preconceptions of what a puppet should be. Unfortunately, despite being directed by Brian Henson (who’s basically the Michael Corleone of the puppet world), “The Happytime Murders” is a lazy and uninspired one-joke movie where not even that one joke is very funny. Though the crime noir aspects work to some degree, it fails in virtually every other department, including yet another loutish performance from Melissa McCarthy. The film’s biggest crime, however, is that it’s really boring, and for a so-called comedy, that’s perhaps the worst insult of all. Extras include an audio commentary by director Brian Henson and voice actor Bill Barretta, a visual effects featurette, deleted scenes and more. FINAL VERDICT: SKIP