Trending
You are at:Home»Entertainment»Movies»Movie Review: “Rampage” 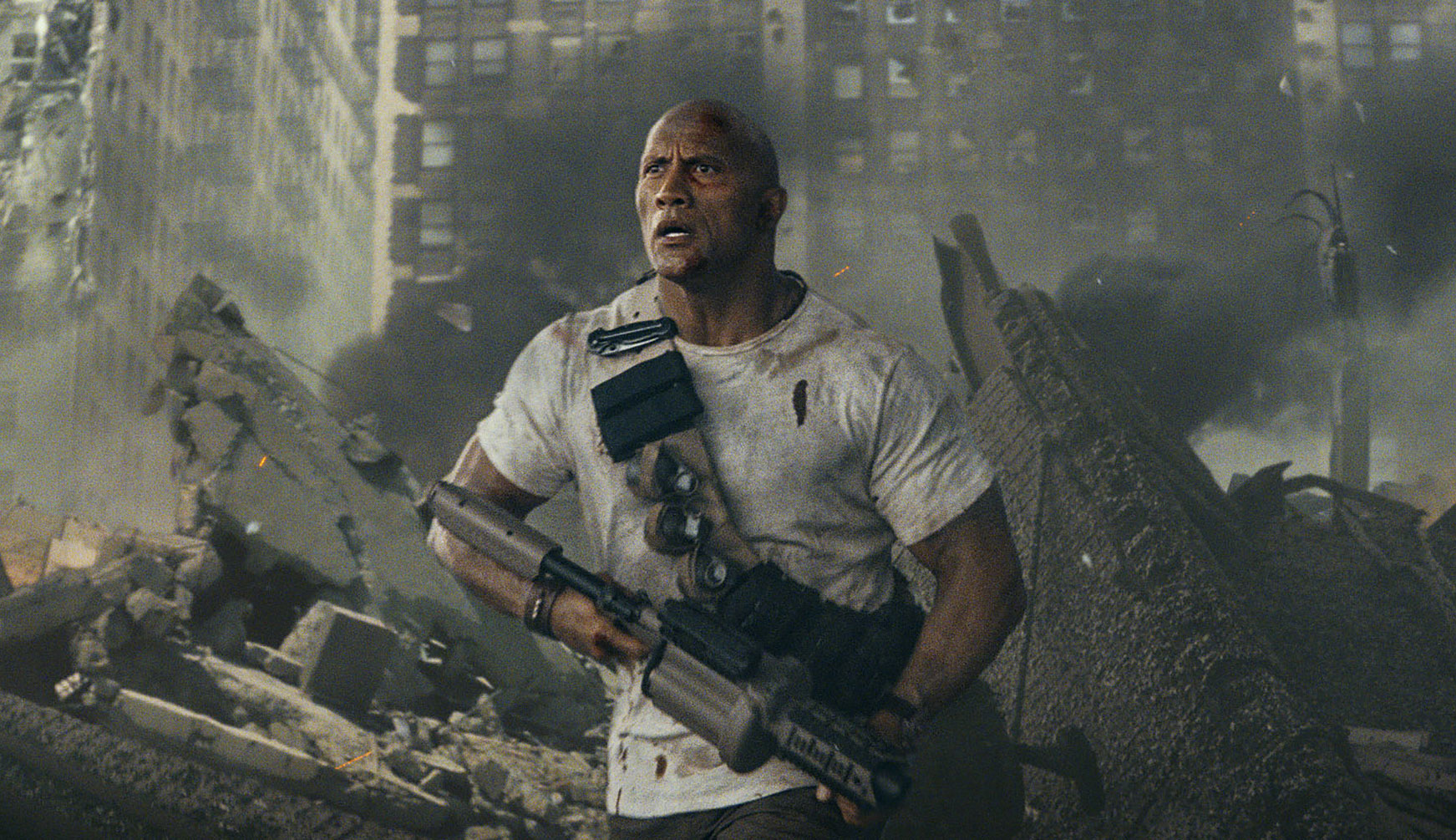 “Rampage” was a slyly subversive video game. Players earn points by unleashing their inner monster to break stuff and stick it to the Man (kill or eat soldiers dispatched to shoot them down). “Rampage” the film, however, is mostly joyless, and takes itself waaaaaaay too seriously, a stark contrast to the tone set in the trailers, which suggested something light-hearted and self-aware. The full-length film is neither of those things.

In a space station orbiting the earth (yes, God help us, this movie begins in space), a group of scientists engage in a series of questionable gene-editing experiments that leave all but one of the crew members dead. The lone survivor leaves in an escape pod, but not before her Earth-bound employers force her to bring along three samples of the highly dangerous chemical compound they were testing. Her pod explodes when penetrating the atmosphere, sending the compromised samples, conveniently, to three disparate locations in the United States.

One of those locations is the San Diego Wildlife Sanctuary, specifically the gorilla exhibit, where albino gorilla George unwittingly ingests the contents of one of the capsules and grows two feet and hundreds of pounds in size overnight. Davis Okoye (Dwayne Johnson), a primatologist who has taken care of George since he was an infant, is reluctant to alert the authorities because he knows that the violent behavior that George has started exhibiting will get him put down. It is not long, though, before the authorities learn about both George and a giant wolf terrorizing Wyoming. Both animals wind up on a crash course for Chicago, home of the tech/bioweapons company responsible for their creation.

There are other actors besides Johnson in this film, but the fact that they didn’t merit a mention in the plot summary is telling. Malin Akerman is the ice queen who runs the shady tech company. Jeffrey Dean Morgan is the aw-shucks FBI agent who has a Richard Kimble/Sam Gerard relationship with Johnson (more on that later). Naomie Harris is the whistleblower with an axe to grind. Demetrius Grosse is the by-the-book Army colonel. And then there is Jake Lacy, who is impossibly bad as Akerman’s ‘Game over, man!’ brother.

That “Aliens” reference serves as a good pivot to discuss the movie’s second most fatal flaw: it’s all been done before (its most fatal flaw being the aforementioned joylessness). The entire thing felt like it was stitched together from ‘80s- and ‘90s-era action films, from Morgan’s riffing on Tommy Lee Jones’ work in “The Fugitive” (the Kimble/Gerard thing) to the ‘watch the soldiers of fortune bite it on body cam footage’ bit (ahem, “Aliens”), to the opening sequence in space, which seemed like it was trying to be the horror version of “Gravity,” water drops and all. The drawn-out introduction of Lizzy the alligator, meanwhile, is reminiscent of Roland Emmerich’s (awful) 1998 version of “Godzilla.” Not a lot of original thought takes place here.

And there but for the grace of God goes Dwayne Johnson, who has made better movies than this but has quickly learned Hollywood’s golden rule that sometimes, you just take the money. He’s easily the best thing here, delivering the deadpan lines with the exact inflection that they require. After that, the most sympathetic characters in the movie are the monsters. They didn’t choose to be the bad guys – badness was thrust upon them by humans. Humans are the worst. We ruin everything.

“Rampage” the video game deserved better than “Rampage” the movie, which is just a ridiculous thing to say. It was as one-dimensional as arcade games got at the time, and still it had more personality than this film. Skip this, find the game online and spend 107 minutes playing that instead.