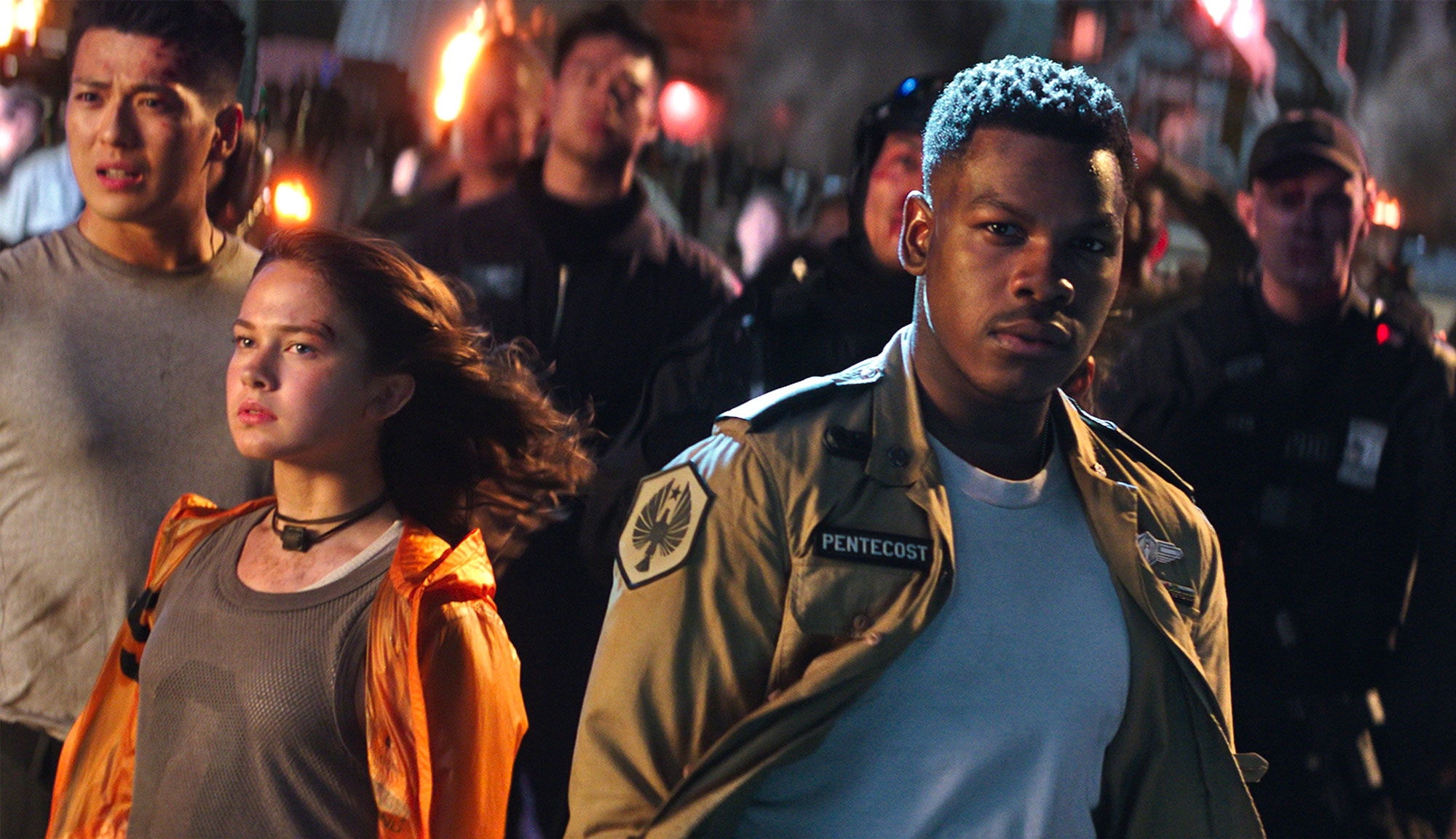 Sequels are always an uncertain proposition. So many different elements have to come together perfectly for a film to be successful. Once that lightning has been captured in a bottle once, how do filmmakers harness it again? Furthermore, how do storytellers expand the worlds and characters they created and tell an original and engaging tale while retaining the parts of the first movie that resonated with audiences in the first place? “Pacific Rim: Uprising” adds new aspects to the premise of giant robots fighting behemoths from another world while staying true to what viewers loved about the original. Unfortunately, although the movie delivers some interesting new characters and a clever plot, it’s saddled with a weak script that makes it a shadow of its predecessor.

Ten years after the events of “Pacific Rim,” Earth is getting back to a new normalcy. While many places have been reconstructed, there are lots of cities still left in ruins following the kaiju invasion. Jake Pentecost (John Boyega), son of famed hero Stacker (Idris Elba) from the first film, has left the jaeger pilot program and spends his days as a thief and scavenger to get by. After meeting up with hacker and wannabe jaeger designer Amara (Cailee Spaeny), Jake soon finds himself in trouble with the law and back in a jaeger ranger uniform. While it has been peaceful for a decade, there is a new threat brewing that seeks to bring back the horrific monsters and spell disaster for humanity.

The first “Pacific Rim” was a popcorn flick born out of a love of multiple genres and influences. The excitement of director Guillermo del Toro was palpable as the camera lingered on monster gore, the intricacies of the piloting program or the simple badassery of a giant robot hitting a giant creature with a boat. Its story was fairly straightforward and mostly dealt in archetypes – a hero’s journey that coupled “Top Gun” with “Godzilla.” While Charlie Hunnam’s lead character was a bland cipher, there were several colorful personalities like Elba’s courageous leader, Rinko Kikuchi’s tortured Mako, Charlie Day and Burn Gorman’s comic relief and Ron Perlman’s outlandish, black-market kingpin surrounding him. It wasn’t a complex film, but it did touch on deeper issues of trauma and compatibility, all while wrapped up in a genre love letter to sci-fi escapism. “Pacific Rim: Uprising” has moments where it reaches these heights, but they are fewer and further between than its predecessor.

John Boyega is charismatic and fun and mostly works well as Jake. His motivations are opaque and underexplored, but his charm is infectious and he’s an improvement over the boring Hunnam. Unfortunately, for as little character development as he receives, it’s a whole lot more than any other character gets in the film. Spaeny is game as the orphaned Amara, who is preparing to fight the kaiju on her own, but with the exception of one flashback, she’s given very little depth or anything of interest to do. Day, Gorman and Kikuchi all return from the previous installment and still have fun with their characters – including taking them in different directions than before – but ultimately, they don’t have a lot of screen time and feel painfully underutilized. The rest of the characters are all blank slates, simply appearing in the movie to fill out the cast without adding anything to the story in any meaningful way. There are many attempts at comedy and playful banter, as well as some moments of drumming up drama within the group, but large swaths of it fall flat.

The lack of engaging characters is a real shame, as there’s a very clever story at the heart of “Pacific Rim: Uprising.” It goes in unexpected directions and introduces smart wrinkles and intriguing developments along the way, but it is all undone when the film seemingly shrugs for a third act fight that is visually interesting but narratively inert. The action for two-thirds of the film is shot very poorly in a way that doesn’t properly frame the stunts or lay out the geography of the fights, but it all improves at the end of the second act and becomes a pretty cool exercise in rampant sci-fi excess. The CGI battles between the jaegers and their opponents are more weightless than the first movie, like there’s less done to make the audiences feel every crushed building or thrown robot punch. However, the third act fight is still impressive and has enough going on to be entertaining. It doesn’t have any real emotional resonance and there are more than a few gaps in logic, but for those seeking out the simple pleasure of mechs versus monsters, they will be happily sated.

Sequels are a difficult thing to pull off. In theory, they should reinforce and refine what audiences connected with in the first entry without repeating those same beats, and they should also expand the world in exciting new ways. Director Steven S. DeKnight and his three co-writers have turned in a film that fulfills some of those achievements – particularly expanding the universe and introducing new threats – but falls short on focusing on what powered the first installment. Boyega, Spaeny, Day, Gorman and Kikuchi are all compelling actors who do the best they can with the material they have and produce moments of genuine fun, but the writing lets them down.

“Pacific Rim: Uprising” is a fine movie that delivers on its premise of watching two iconoclasts from the sci-fi genre mix it up in interesting ways, but it could have been so much better with a greater dedication to the writing and character development. Though it’s ultimately a bit of a mixed bag, considering the original wasn’t all too different, perhaps that’s the most we should have expected.