She’s beautiful and funny, with a killer smile that makes her jump off the screen. Julia Louis-Dreyfus has established herself as one of the most talented and accomplished comedic actresses of our time. She created two iconic television characters in Elaine Benes on “Seinfeld” and Selina Meyer on “Veep.” Along the way she racked up a series of awards for her television work, making her one of the most decorated actresses in TV history.

Julia is still a very busy actress, and you can follow our latest Julia Louis-Dreyfus content along with our archived Julia posts on our blog.

For many fans, Julia’s role as Elaine Benes on “Seinfeld” in the 90s will always be a favorite. We highlighted this character in our “TV Girlfriends” feature in the “High Maintenance Hotties” category. Here’s what we said about the Rachel character:

The cute and curly-haired Ms. Benes is shallow, selfish and far from easygoing, but consider the company she keeps and she starts to look pretty good. And there’s plenty that’s kind of endearing about her other less attractive qualities, like her dancing, described by her frenemy George Costanza as “a full body dry heave set to music.” We like her because of, not despite, the fact that after hearing about a boyfriend’s serious accident, she stops to buy Jujubes, or that she believes Jerry when he tells her that the original title of Leo Tolstoy’s War and Peace was War, What is it Good For?, or that a chance encounter with the handsome John F. Kennedy, Jr. (“John John”) causes her to lose the most famous self-denial contest in TV history. Sure, Elaine is dishonest, petty and, when it comes to her dwindling supply of contraceptive sponges, exceptionally choosy – despite having a history of dating that includes the brainless David Puddy and the ultra-pretentious “Maestro.” Still, we think the man who is deemed truly sponge-worthy is among the luckiest of men, and it’s not just Elaine’s shiksa-appeal that’s making us say it.

We loved how she looked in this show, with the big hair and the quirky clothes that often included lots of floral-patterned dresses with white bobby socks and clunky Oxford shoes as Julia explains in this interview with Vogue. 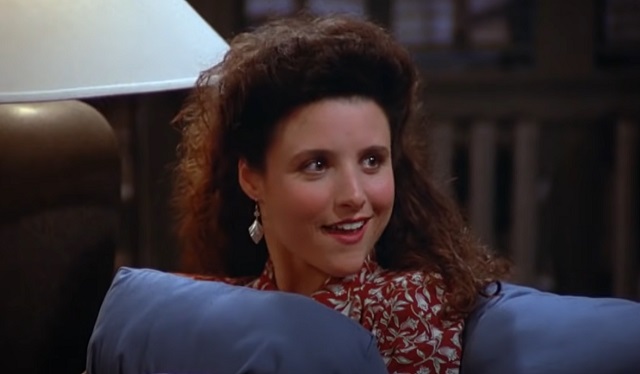 Few actresses can claim a television career that comes close to that of Julia, who created not one but two iconic characters. Julia’s portrayal of Selina is unforgettable, particularly in these crazy times. Here’s what critic Jason Zingale wrote about the series when recommending the DVD for the fifth season of the show:

There’s always been some truth to “Veep’s” exaggerated depiction of D.C. politics, but in the wake of Donald Trump’s presidency, the HBO comedy series feels downright prescient in the way that it satirizes incompetence within the U.S. government. Revisiting the show’s fifth season after the 2016 election is almost a completely different experience, although one that still works really well on a comedic level. The change in showrunner hasn’t affected the quality one bit; Julia Louis-Dreyfus and her co-stars remain the funniest cast on TV, and the writing is as sharp as ever, including another ballsy finale that pushes the series into uncharted territory once again. There’s a reason why “Veep” wins so many awards, and it’s because no other comedy has even come close to topping it. Julia got started doing improv in her early 20s as you can see in this ET clip. She looked pretty damn cute there and you could see her talent. That led to a three-year stint on SNL, though those weren’t the glory years of the show. She really caught our attention as the pretty and funny Eileen on the short-lived sitcom “Day by Day.” Before joining “Seinfeld,” she also landed a small but hilarious part in “Christmas Vacation” as the hot wife in the yuppie, neighbor couple. 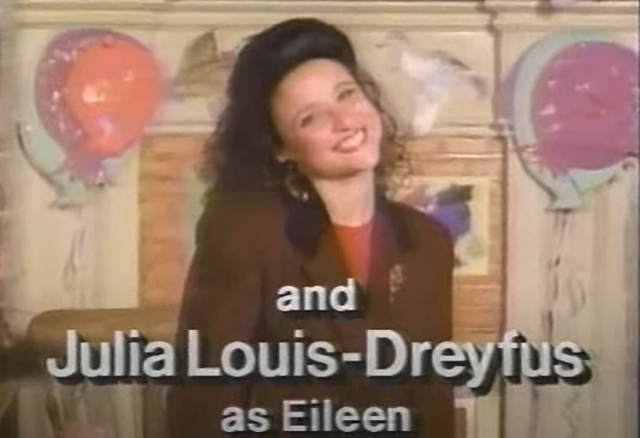 After her amazing run on “Seinfeld,” Julia had a solid hit with “The New Adventures of Old Christine” where she broke what some were calling the “Seinfeld Curse” after Seinfeld’s co-stars had some trouble finding other hits. That phrase was blown to bits even more with Julia’s success on “VEEP.”

Here are DVD and TV show reviews with Julia:

Seinfeld: Seasons 1 and 2: 5/5 Stars
The Elaine character wasn’t included in the pilot episode, and the NBC executives insisted that creators Jerry Seinfeld and Larry David add a female character, and Elaine was born. It’s one of the few things the NBC executives got right.

Seinfeld: Season 3: 5/5 Stars
The show really hits it’s stride in Season 3 with classic and unforgettable episodes. While Season 4 may be the best sitcom season in TV history, Season 3 is right up there in quality.