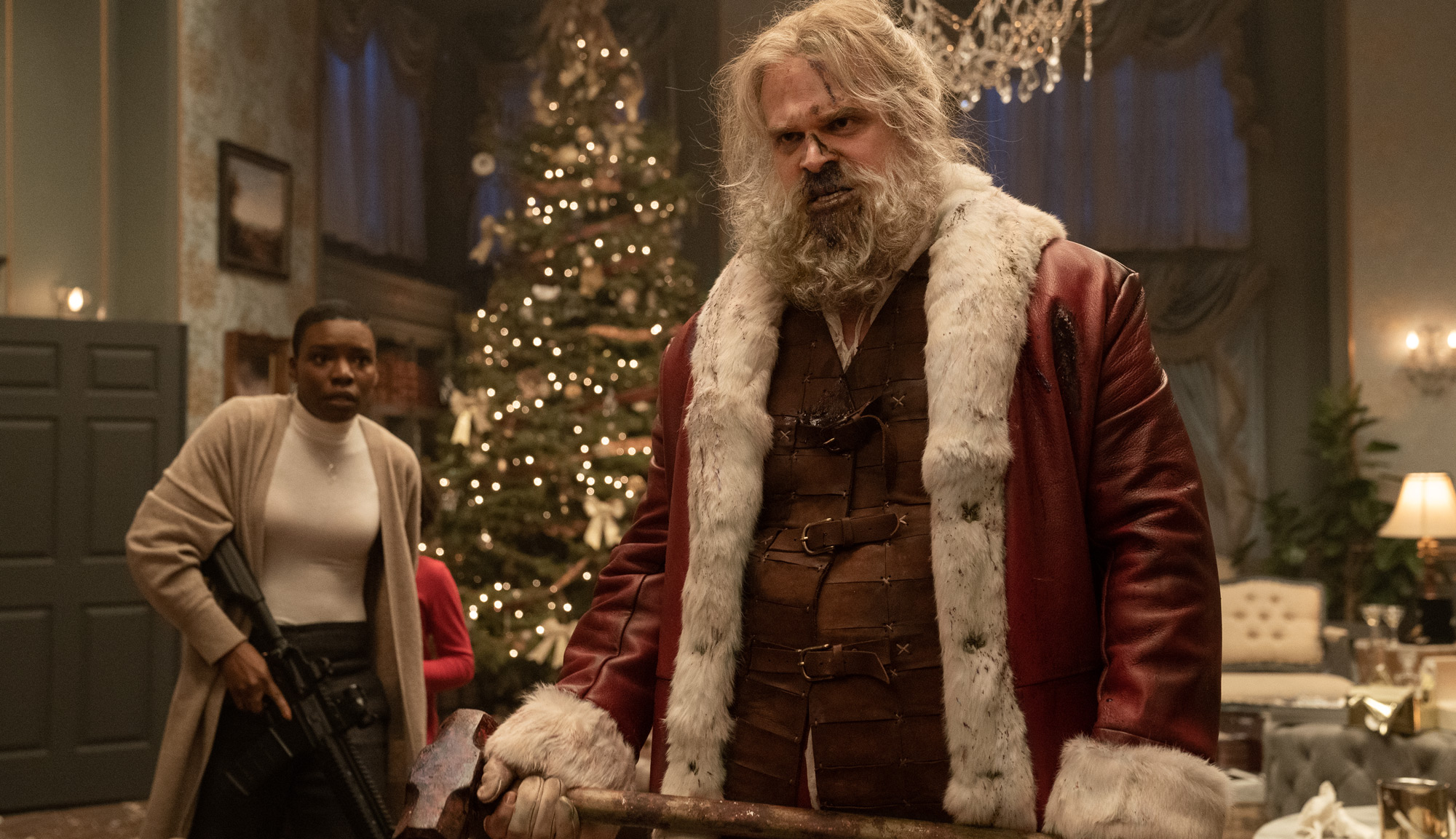 Why is everything so much more intense during the holidays? Even for those who don’t celebrate, there is still this charged air around everything. This is why Shane Black likes to set many of his action movies during Christmas: There’s already a sense of heightened emotions that people experience and that audiences bring into the theater, making the events of the films that much bigger and bolder. Not only does the subversion of action in these frantic holiday times hit harder, but so do the quieter, emotional beats around love. “Violent Night” understands all this and weaponizes it perfectly in a terrific (and improbable) mix of brutal violence and sincerity that delivers a charming movie perfect for a new holiday viewing tradition.

It’s Christmas Eve and Santa Claus (David Harbour) is feeling particularly low. Awash in alcohol and resentment, Saint Nick is making his way around the world with his reindeer and delivering gifts. Problems arise when he arrives at the Lightstone compound, home to a ridiculously rich and influential family who all seem to hate each other by design of the matriarch (Beverly D’Angelo). Her granddaughter, Trudy (Leah Brady), is still full of Christmas cheer despite this nest of vipers and her parents’ impending divorce. That pure-hearted devotion to the holidays is tested when a man calling himself Scrooge (John Leguizamo) shows up with a cadre of armed thugs to rob the Lightstone estate. Santa is forced to fight back against the goons and may be Trudy’s lone hope for surviving the holidays.

Before delving further into the film, it’s worth commenting on my four-star rating. This doesn’t mean that “Violent Night” is as good as some sweeping awards contender with a similar rating. These grades are all relative to the types of film being made. In other words, an “A” in Basic Algebra is not the same as an “A” in Advanced Trigonometry. With that being said, “Violent Night” is a raucous good time fueled by strong comedy, a surprising amount of heart and delicious ultra-violence. Director Tommy Wirkola, working from a script by Pat Casey and Josh Miller, cleverly combines these different tones without sacrificing the impact of any of them. The graphic blood-spurting and bone-breaking sequences hit just as hard as the surprising sweetness of Trudy’s ardent belief in Santa, all delivered with cheesy one-liners that are played perfectly straight. “Violent Night” is not a crowning achievement of cinema, but it delivers exactly what you want from a movie where Santa fends off scores of gun-toting criminals.

The anchors of the film, besides the impressive action and stunt work, are the three main actors: Harbour, Leguizamo and Brady. None of them are winking or acting like the whole thing is a big joke, and it’s the commitment to their roles as the grizzled hero, melodramatic villain and wholly innocent child, respectively, that lays the groundwork for the frenetic fighting and comedy that fuels the rest of the movie. It’s clearly a ridiculous premise, yet everyone involved, from the director to the stunt performers, takes it deadly seriously to sell each unbelievable hammer blow to the head and Christmas pun that Harbour drops. It’s surprising how violent “Violent Night” is willing to get, with even more bloodletting and mangled bodies of home invaders than Adam Wingard’s “You’re Next.” And the film is all the better for it because it elevates the movie from simply being a grown-up “Home Alone” to a winning dark comedy drenched in gore.

87North Productions, which previously brought audiences “Nobody” and “Bullet Train,” and sprang out of the stunt crew and personnel that oversaw the “John Wick” films, figure out incredible ways to dole out the punishment. Sure, this is the type of movie where some killjoy will ask, “Why didn’t that bad guy shoot this good guy when they had the chance?” But such a question misses the point of the whole thing. “Violent Night” has no interest in reality, existing in the same heightened space as most kids’ films where Santa is a key character. It’s a fantasy — albeit one that involves icicles as stabbing implements and the burning skulls of enemies driven before jolly old Saint Nick. Wirkola and company, and especially the stunt team led by Jonathan Eusebio and Dan Skene, are all in on this lunacy and work to make audiences gasp with each new strike from Kris Kringle while also getting a bit choked up at the purity behind Trudy simply wanting her parents to get back together.

“Violent Night” is best enjoyed with a crowd and knowing as little as possible about the movie’s frenzied set pieces. Wirkola has crafted a terrific Christmas film that benefits from the shocked laughter and whooping and hollering of watching some unfortunate thugs get brutally dispatched by Santa. It doesn’t completely subvert the holiday or go as twisted as it could, but it remains a delight that will surprise and entertain. The holidays are a turbo-charged time for people — even those that don’t participate — and it has been a long time since a seasonal movie matched those emotional heights like “Violent Night” does.