Trending
You are at:Home»Entertainment»Movies»Movie Review: “Doctor Strange in the Multiverse of Madness” 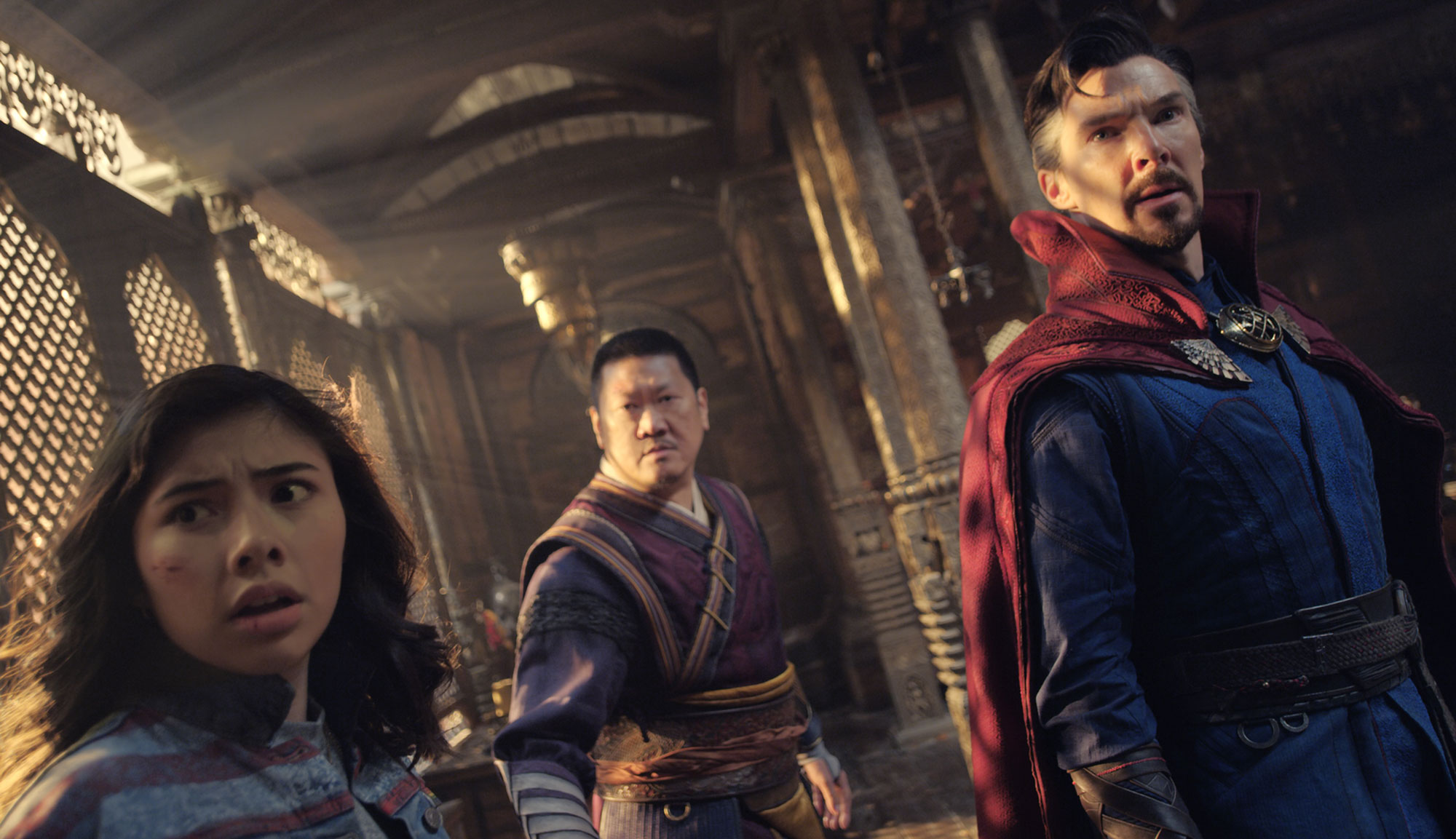 Every time a filmmaker with a distinct style embarks within the Marvel Cinematic Universe (MCU), questions swirl about how their vision will gel with that of Disney. After all, they’re tasked with telling a story using characters and a world that belong to other movies and shows while creating something that appeals to the widest audience possible and appeases diehard fans. Though Chloe Zhao’s “Eternals” was a mixed bag that found her ill-suited for that project, and Edgar Wright famously broke ties with Kevin Feige and gang due to their meddling with his “Ant-Man,” James Gunn and Taika Waititi found ways to maintain their idiosyncrasies while melding with the MCU machine to produce singular and terrific entries. Sam Raimi, a true auteur whose career spans 41 years with films of all different sizes and genres, comes into the MCU with “Doctor Strange in the Multiverse of Madness.” He brings along a very distinct style, not to mention the fact that he hasn’t directed a movie since 2013’s “Oz the Great and Powerful.” A new Raimi film is cause for celebration, but would all these factors lead to a diluted final product by such an icon? The answer: Not as much as assumed or feared!

After being part of the victory against Thanos, Stephen Strange (Benedict Cumberbatch) finds himself as a superhero celebrity, but it’s a lonely life. His previous love interest, Christine Palmer (Rachel McAdams), has moved on; he no longer serves as the Sorcerer Supreme, with the title going to his colleague Wong (Benedict Wong); and he spends most of his days alone in his sanctum, haunted by dreams of death and destruction. It turns out that those dreams are glimpses into other dimensions, as explained by America Chavez (Xochitl Gomez), a visitor who can travel across the multiverse as she works with variants of Strange to fend off monsters that seek to steal her superpower. Wong, Chavez and Strange turn to Wanda Maximoff (Elizabeth Olsen) to learn the origins of these creatures and their goal, ultimately leading to the group traveling across different versions of reality — each with its own rules, surprises and threats.

“Doctor Strange in the Multiverse of Madness” is a unique entry in the MCU catalog, and much of that is due to Raimi’s style perfectly complementing the adventurous script by Michael Waldron (“Rick and Morty,” “Loki”). It would be safe to assume that all the filmmaker’s penchants would be smoothed over by the studio to keep it more in line with the usual motifs that have become synonymous with Marvel’s output (for good and ill). However, there are still prime examples of Raimi’s unique style, with operatic camera movements, dramatic musical stings, goofy humor, unexpected lunacy and unsettling horror. Even with those moments, “Multiverse of Madness” is still a hybrid that marries these flourishes with Marvel’s usual approach (color correction, seeding for other entries, bombastic but weightless fights, and so on). Like the first “Doctor Strange,” there are impressive and inventive visuals that aren’t found in most other superhero outings. The sequel tops those tenfold, with its enticing imagery reflecting Waldron’s imaginative writing by infusing audiences with joy at the cleverness on display and never quite knowing what will happen next.

All the actors get to be funny, tragic, badass and relatable in different moments, which helps them feel genuinely fleshed out. There is some undercutting of this complexity whenever an exposition dump occurs, and while it isn’t that frequent, it still happens often enough to be awkward. Cumberbatch continues refining his character’s previously established mix of flippancy and melancholy, but he also enjoys greater rein in playing up different aspects with the many variations of Strange that the audience meets. Olsen skillfully explores a wide spectrum of emotions, building on what was done with the character in “WandaVision.” Wong and Chiwetel Ejiofor (returning as Mordo) don’t get as much to do but still make the most of their time, while McAdams, who is given more agency and importance in this installment than the last, is nonetheless a backseat figure for much of the runtime.

“Multiverse of Madness” will be a divisive film with audiences. Surprisingly, it’s about 65-70% a Raimi movie, complete with all his stylish excesses. But those looking for another “Spider-Man: No Way Home” will be confused by the crazy and ornate tale unfolding before them. The melodramatic score by Danny Elfman, the frenetic camerawork of John Mathieson and the shocking amount of horror elements may put off many family audiences, though it’s never done in a cynical grimdark way meant to scandalize. Fans of the insanity of “Army of Darkness” and “The Quick and the Dead” will love these unexpected dashes of Raimi goodness in their MCU movie but may be annoyed by the retreats into Marvel’s formula. Also, if folks are not current with the Disney+ shows or other films, they will most certainly be lost. (And, as there are several surprise cameos, these nods may also go over the heads of many). It’s probable that most viewers may find it to be a half-measure that’s not Raimi enough but also not close enough to the usual blockbuster fare from Feige and crew.

I am the literal exact target audience for “Doctor Strange in the Multiverse of Madness.” I love horror; I was raised on and still read Marvel comics; I am enamored by Sam Raimi’s vision and filmography; and I enjoy the vast majority of the MCU output. These all come together like a cinematic Voltron to make for a sincerely joyful experience. However, it is an uneven film, to be sure, with standout sequences abutting routine Marvel speechifying and winking references. Many have complained that every MCU property is the same. Some of those familiar faults are present, but it is impossible to deny that “Doctor Strange in the Multiverse of Madness” is a unique creature that is as fascinating to watch as it is thrilling to experience.