Trending
You are at:Home»Entertainment»Movies»Movie Review: “Eternals” 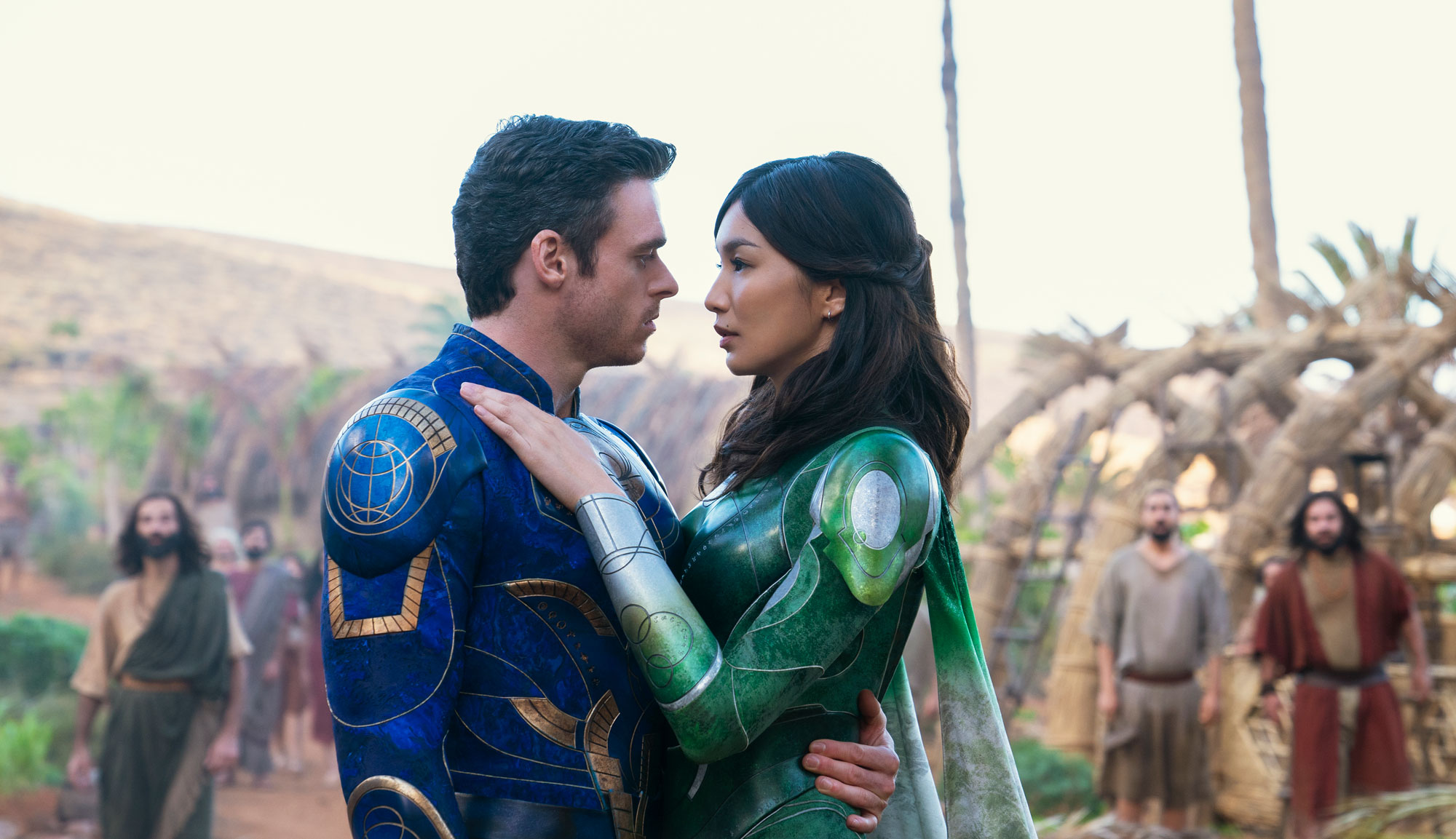 When Marvel hired Chloe Zhao to direct “Eternals,” the linchpin of the post-Avengers phase of the Marvel Cinematic Universe, they could not have imagined that her next film, “Nomadland,” would end up winning three Academy Awards, including Best Picture and Best Director. The film was originally slated for release around the same time as “Nomadland,” but the entire 2020 Marvel slate was upended by the pandemic, sliding everything into 2021. It turned out to be a nice little coup for Marvel, who suddenly could market the most esoteric film in their catalog as having been created by an Academy Award-winning director. It might be needed, as “Eternals” has a lot of ground to cover.

The Eternals are a race of superbeings from the planet Olympia who work for the Celestial Arishem (David Kaye) to protect worlds from a race of quadrupedal monsters called Deviants. We are introduced to the Eternals who have been tasked with protecting Earth, including leader Ajak (Salma Hayek), who has the power to heal wounds; Sersi (Gemma Chan), who can alter matter in certain ways; Ikaris (Richard Madden), a clear Superman analog with the ability to fly and shoot lasers from his eyes; Thena (Angelina Jolie), who can conjure golden weapons to fight with; Kingo (Kumail Nanjiani), who can shoot energy bullets from his hands; and Gilgamesh (Don Lee, aka Ma Dong-seok from “Train to Busan), who can punch things really hard. There’s also Sprite (Lia McHugh), a shapeshifter and reality shaper; Druig (Barry Keoghan), a telepath and mind control specialist; Phastos (Brian Tyree Henry), a tinkerer and inventor; and Makkari (Lauren Ridloff), a speedster who is also deaf. We watch them protect the world from Deviants across the generations until they defeat them for good during the fall of Babylon. They’ve been living quiet lives since then, but when the Deviants return, they’re forced to team up again to stop the threat once and for all.

Catch all that? The film has an almost impossible amount of heavy lifting to do in its 157 minutes, needing to explain and establish the concept of Celestials, Eternals and Deviants, let alone the specific group of Eternals who serve as the protagonists here and the wider cosmic purpose of the giant beings who they serve. That means that even well into the second hour of the film, the momentum has to grind to a halt in order to explain yet another concept required to follow the plot. All of this exposition ends up short-changing the character development, making the majority of the heroes into little more than sketches with a personality trait or two, like the big guy who enjoys punching things, or the small guy who solves all of his problems with mind control, or the medium-sized guy who kind of makes things with his hands. Chan and Madden get the majority of the development, and Nanjiani gets the majority of the comic relief, but this is a movie about bringing the band back together, so not caring about seven of the ten people we’re supposed to care about makes for rough going during such a long movie. There are a few sparks, most of which come from Henry, the most charismatic member of the cast, so he naturally disappears for the majority of the runtime. Similar to DC’s attempt to sprint to the Justice League after barely any movies, “Eternals” just has too much to do in too little time, despite being the second longest film in the Marvel canon.

But that’s not the whole story of the failings of “Eternals.” It’s the Deviants who really tank the entire proceeding. Positioned as the sort of long-term cosmic foil to the Eternals, the Deviants are complete duds — a set of uninspired designs that serve to splash CGI all over Zhao’s trademark naturalistic cinematography and distract with the same fight scenes that we’ve seen dozens of times before in all these superhero movies. Attempts to bring them back in the second half of the film as a new threat who can steal the Eternals’ powers as it kills them falls spectacularly flat, especially since the central conflict of the final act treats them as little more than a nuisance or distraction.

There’s no question that “Eternals” tries to differentiate itself from the pack in attempting to mount a more cerebral, philosophical and emotional take on the battle to save the world from the most recent giant thing/existential threat. But despite these attempts to shake up the most recognizable formula in all of entertainment, the film remains utterly familiar in everything it does. The Deviants are just an even more boring version of the Chitauri or Thanos’ minions from the Avengers movies; the Eternals just so happen to wear spandex super suits like all the other heroes do; and attempts to raise the stakes to something godlike is just another coat of paint on Dormammu from “Doctor Strange.” You don’t get credit for trying to raise the narrative to something deeper and more philosophical when so much of the result is laughable (“We caused Hiroshima and thus feel bad about it!” is a somewhat reductive take on one howler of a scene, but that’s essentially the gist). It’s entirely possible that a movie like this could work in some alternate universe where Kevin Feige is not so zealous in the control of his IP, but we do not live in that universe. The idea that an eight-second, emotionless sex scene is somehow groundbreaking for this genre is the most damning indictment of the entire Marvel enterprise and proof that “Eternals” never stood a chance.

I don’t lay this at the feet of Zhao, despite being the director (and twice credited as a writer, which you don’t see too often). The Russos and the Kenneth Branaghs and the James Gunns of the world can fit right into the setting and the requirements because their authorial voices (or lack thereof) are already designed to gel with the institution. For someone like Zhao, who has made ponderous, intensely personal films filled with first-time actors, it never had a chance. Her sense of visual style is lost on MCU house cinematographer Ben Davis, and what does look good is painted over with wretched CGI. It’s a failure on all levels. This is without a doubt the worst MCU film to date and the sort of rancid theater experience that makes you want to rethink the whole thing and burn it to the ground.