Trending
You are at:Home»Vices»Drink of the Week: The Million Dollar Cocktail 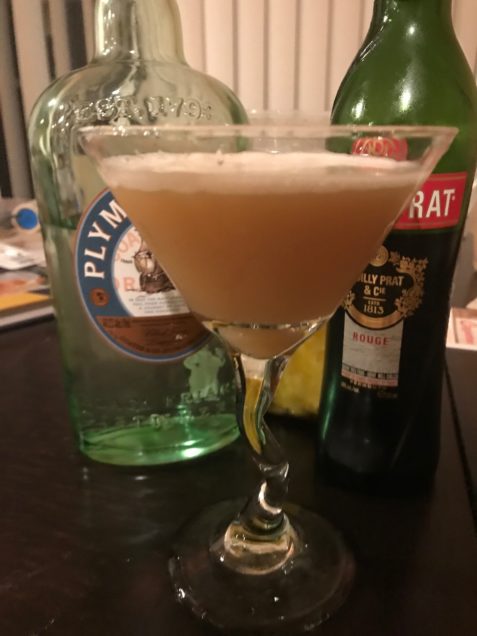 We don’t know how the Million Dollar Cocktail got its name. Moreover, if anyone tries to charge you more than, say, $17.00 for it, it better have a $5.00 bill as a garnish. Even so, it’s one drink that does teach us a valuable lesson.

Regular readers will take note that the second half of these posts usually focus mostly on my choice of brands. That’s because they matter. Cocktail recipes from famed mixologists are often very specific about ingredients and, if you don’t use exactly what they say, the possibility of a disappointing outcome is always there.

That’s even more true if you’re talking about style of liquor. For example, if a recipe calls for Jamaica or aged rum, standard silver/white rum is not what the creator had in mind at all and your drink might taste very thin or even out-and-out nasty. Some drinks, however, are versatile enough to use with just about any version of its base spirit. The Million Dollar Cocktail is not one of them.

According to a couple of people on the Internet, the Million Dollar Cocktail was the brainchild of a 19th century German expat bartender named Louis Eppinger who worked at Japan’s Yokohama Grand Hotel — a place I’m guessing that mainly catered to a predominantly gaijin clientele. The recipe, however, comes from, yet again, 1930’s The Savoy Cocktail Book. Variations abound, and we’ll do one of them next time. For now, however, we’re sticking with a recipe that we presume is pretty close to the original.

Combine the ingredients in a shaker and shake first without ice to emulsify the egg white. (This step is optional if you’re using pasteurized egg white.) Add ice and shake vigorously for at least 10 seconds and strain into a chilled, large cocktail glass. Sip and contemplate what $1 million would have bought during the 19th century.

The Million Dollar Cocktail is one of 23 drinks that specifically call for Plymouth gin in The Savoy Cocktail Book.  Plymouth gin as a style is different from other gins for two reasons. First, like cognac, champagne, and tequila, it can only legally be made in one place, Plymouth, England; the much more common London dry cocktail can actually be made anywhere. Second, while still very far from sweet, it’s just a tad less dry and less floral (many say more “earthy”) than other gins. These days, I believe, there’s only brand of Plymouth gin, and that’s Plymouth Gin, made by the same company that makes the best known of the high quality sloe gins out there.

That slight difference is crucial in this drink. Using Gordon’s Gin, a high quality value brand that some might consider slightly flavorless was kind of okay. Using such classical London drys as Beefeater and Ford’s, however, turned out to be just kind of nasty — excessively bitter and astringent. With Plymouth, however, the whole thing comes together very nicely, with the less pointy botanicals allowing the sweeter flavors in the drink to have their due.

I have to admit that the only sweet vermouth I used with this was Noilly Pratt. It’s possible that something like Carpano Antica or Punt e Mes might have made a difference with the London drys, but I’m not on expense account here. If anyone out there tries it, let me know.

I also used both fresh and canned (Dole) pinnapple juice. Both were fine but, as usual, fresh is better.