Trending
You are at:Home»Vices»Drink of the Week: The Bacardi Santiago Cocktail 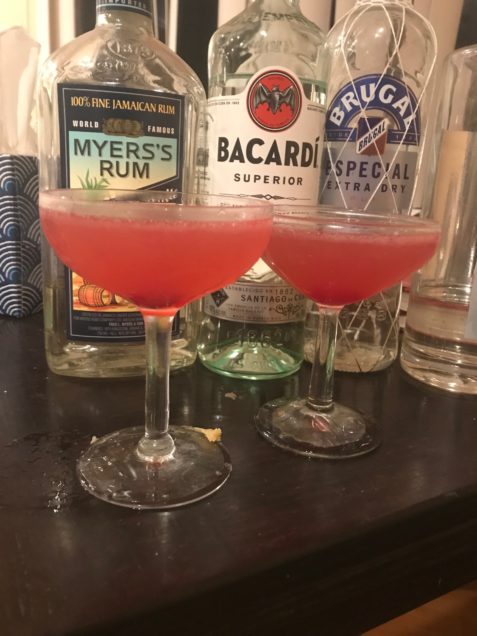 It may no longer be a big factor in the White House, or in the state houses of Pennsylvania or North Carolina, but here at beautiful DOTW Manor, we believe in the rule of law. Others might arrogate to themselves the right to call today’s beverage a revisited take on the Bacardi Cocktail, but we have grown wise since 2011. We now realize that, on this Presidents Day weekend, we must abide by the 1936 ruling of the New York State Supreme Court which held that fobbing off a drink containing another brand of rum as a Bacardi Cocktail was tantamount to consumer fraud.  At the same time, there are many brands of white rum out there and it just isn’t fair to limit this drink to one. Technically, then, today’s drink is a Santiago. However, Bacardi is one of the brands I’ll be using. So, we have a law abiding compromise.

Of course, 1936 was a very different time in cocktail history from our own. In those days, Bacardi — not a super premium expression, but just plain old white Bacardi rum — was the good stuff. Bars that were substituting other brands were trying to save money. My substitutions are all actually more expensive. To be fair, Bacardi does make some excellent higher end white rums, but I don’t have any of those.

Combine the rum, juice, and grenadine syrup — I hope one with some actual pomegranate juice in it — in a cocktail shaker. Shake most vigorously, and strain into a chilled cocktail glass. Sip and contemplate the need for the rule of law and judicial oversight. On the other hand, you’re probably drinking so you don’t have to think about that kind of thing.

If you look at my earlier take on this drink, you’ll see that I suggested using only a tiny half-teaspoon of grenadine with a fair amount of lime juice and a bit less rum. I’m not sure what I was thinking back then but, at the proportions above, I can’t think of using any less grenadine, despite the significant increase in calories. I should add, however, that most of my Barcardi Santiagos were made using the super-simple home made grenadine I made a few weeks back — mostly just equal parts store-bought pomegranate juice and superfine sugar with some orange and rose flower waters — which will soon be in danger of going bad,despite the small portion of vodka I just added. However, I also tried using my usual grenadine, the not-bad-at-all Master of Mixes, which actually contains juice. I still think it’s an excellent product for the money, but, I have to say, now that I’ve found such an easy recipe, I’ll be making my own grenadine more often in the future.

As for brands, my main advice is to watch out for very sweet rum expressions with a lot of vanilla/molasses flavor. I had to dump one of two drinks made with very good white or blonde rums. On the other hand, the lighter vanilla taste of Selvarey and Shellback (not a huge favorite of mine) blended nicely for a flavor that my in-house guinea pig described as “very juicy.” With all due respect to the Bacardi folks, however, the version I made with their product was fine but a bit too plain and not at all juicy. Much better was Brugal Extra Dry, which made for a tangier drink and, maybe best of all, Myers’s. That classic rum brand seemed to me like the Goldilocks rum for the Bacardi Santiago. Not too plain or dry, but not at all busy either.

I should add that, at least back in the day, many purists insisted that the real Bacardi Cocktail consisted only of lime juice and sugar. Nothing at all wrong with that. However, that outstanding true cocktail classic is just as good when it’s a Daiquiri.