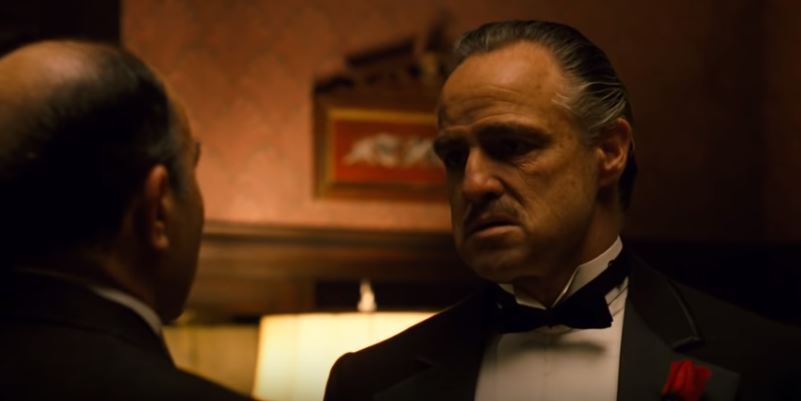 “The Godfather” is considered by many to be the best movie ever made. This compelling drama following a mafia crime family created a genre of gangster films that still flourishes in Hollywood. Francis Ford Coppola created a masterpiece that has become ingrained in our pop culture and launched his amazing career as a director.

The Making of “The Godfather”

Most great films have a great backstory as well regarding how it was made, and the story behind “The Godfather” is just as fascinating as it is improbable.

– Here’s an excellent documentary from 1990 about the making of this iconic film, addressing much of the drama surrounding the casting decisions.

– In this video, Coppola discusses how he was able to convince the studio to use Marlon Brando.

The Francis Ford Coppola commentary in most of the DVD/Blu ray sets is amazing. It’s funny in a way as he never stops talking, so it works for fans who have seen the movie many times. Coppola provides so much detail regarding every aspect of the production. This is a must-see for film students and movie buffs.

We won”t focus much on Part III here, because like most fans we don’t believe it lives up to the first two films.

Here’s a great interview with Robert Duvall explaining why he wasn’t in the third film as Tom Hagen. There had been rumors that Duvall didn’t want to play second fiddle again to Pacino in a supporting role, but Duvell explains it really came down to money. That’s hat drove the last film, and he wanted to be treated fairly. There’s doesn’t seem to be hard feelings, as he’s very complimentary of Coppola and the first two films. Watch below and see the second part of the interview here.

At this point, honestly, there was no particularly good business or creative reason why Paramount should have hired Coppola to adapt a super hot property like Mario Puzo’s hugely popular pulp crime novel, “The Godfather,” to the big screen. However, several well-known directors, including Sergio Leone (“The Good, the Bad, and the Ugly”), had already turned the project down and the instinctive and mercurial young producer Robert Evans was sold on Coppola.

Even so, Coppola faced opposition from a highly skeptical studio structure and was nearly fired during the production. He wasn’t. “The Godfather” redefined the gangster film for a new era, combining a sort of twisted glamour with shocking violence, operatic drama, black humor, and a riveting family saga. Phrases like “an offer he couldn’t refuse” permanently entered the language and actual criminals started to copy the behavior and clothes styles they saw in the film. Hollywood was stunned when “The Godfather” lost several Academy Awards to the brilliant but less epochal realist musical, “Cabaret.” “The Godfather” won only three Oscars, but one of them was for Best Picture.

Here’s a great compilation of deleted scenes from the films compiled in chronological order:

The Rewatchables
Bill Simmons, Sean Fennessey and Chris Ryan “honor one of the greatest films in American cinema history.” This is an excellent movie podcast in case you haven’t checked it out. Many episodes are exclusively on the Spotify player but this one is available on all podcast players. It’s a great episode until Simmons gets way to hung up on some nits . . .

Life Lessons from “The Godfather”
Here’s a fun look back at the film with an overview of the life lessons guys can learn from the movie. This is just of the many facets of this masterpiece from Coppola.

Cocktail Recipes – The Godfather
Here’s a cool drink recipe from Bob Westal loosely related to the movie. “The only things the movie, “The Godfather” and the drink, the Godfather, have in common is that they both first appeared sometime in the 1970s and they both got a big awareness boost thanks to Marlon Brando. Now, there is no confirmation on this, but the story goes that the late superstar mega-thespian was fond of combining Scotch and amaretto, a very sweet, somewhat bitter and very popular almond-based liqueur.”