Trending
You are at:Home»Vices»Drink of the Week: The Godfather 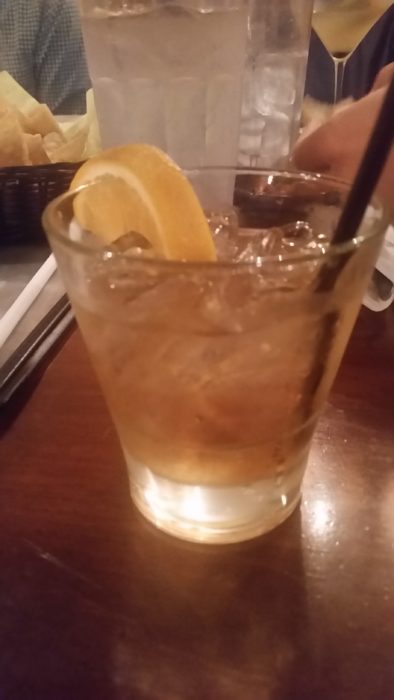 Movies and cocktails are two subjects I’ve often combined. Still, the only things the movie, “The Godfather” and the drink, the Godfather, have in common is that they both first appeared sometime in the 1970s and they both got a big awareness boost thanks to Marlon Brando. Now, there is no confirmation on this, but the story goes that the late superstar mega-thespian was fond of combining Scotch and amaretto, a very sweet, somewhat bitter and very popular almond-based liqueur.

While there’s no denying the (very) eccentric Mr. Brando’s influence on the acting profession, and there’s even less denying the importance of “The Godfather,” to movie history, this drink seemed worth looking into here because of its popularity, but I can’t quite say I’m in love with it. The sweetness is very predominant, even if you cut the proportions from the original 1:1 ratio, as I did. Moreover, since this is a two-ingredient wonder a la a Rusty Nail or a Stinger, there’s not much else you can do without making this an entirely different drink. The best you can do is just to cut the sweetness with more water, by shaking or stirring first but, however you slice it, this is a drink for people with a big time sweet tooth. If that’s you, then keep paying attention.

Combine the two ingredients in a cocktail shaker or mixing glass and stir or shake. Next, pour into a rocks glass filled with fresh ice. Garnish as you wish and ponder, I don’t know, the sweeter things in life.

I tried this one with a number of different ingredients. Since there’s only two ingredients, they do make a difference but I failed to find a magic formula.

My Scotches were Dewar’s, Johnny Walker Black, and Monkey Shoulder. My amarettos were Disaronno (of course), but also Luxardo and the lesser known Gaetano. The last of these I bought because, no kidding, a 1.75 liter bottles four — count ’em — was four bucks at my excellent neighborhood booze emporium, Mission Wine & Spirits. Both Disaronno and Luxardo are pretty top drawer products on their own…but the Gaetano is definitely a bargain at $4.00 and maybe even double that price; it’s definitely not terrible. They all dominated the Scotch, in any case.

My attempts to find a magic formula were mixed. I started out with Dewars, and the relatively mild flavor profile failed to fight back much against my amarettos. I thought the smokier flavor of Johnny Walker Black might make a difference, but I can’t say it did. I probably enjoyed the versions I made with the sweetest Scotch, Monkey Shoulder. Sometimes it’s better to give in than the to fight the inevitable.

I will say that the best version I had of this drink wasn’t made by me at all, but by an anonymous barkeep at the Woodland Hills branch of El Torito, which I was spending some time with coworkers. I don’t know what he/she used or how he/she lightened up the drink, but the beverage you see pictured above was actually pretty nice and almost refreshing. Still, very sweet…but people will go to considerable trouble to savor the taste of sweet things, won’t they?