Trending
You are at:Home»Entertainment»Movies»Movie Review: “Last Night in Soho” 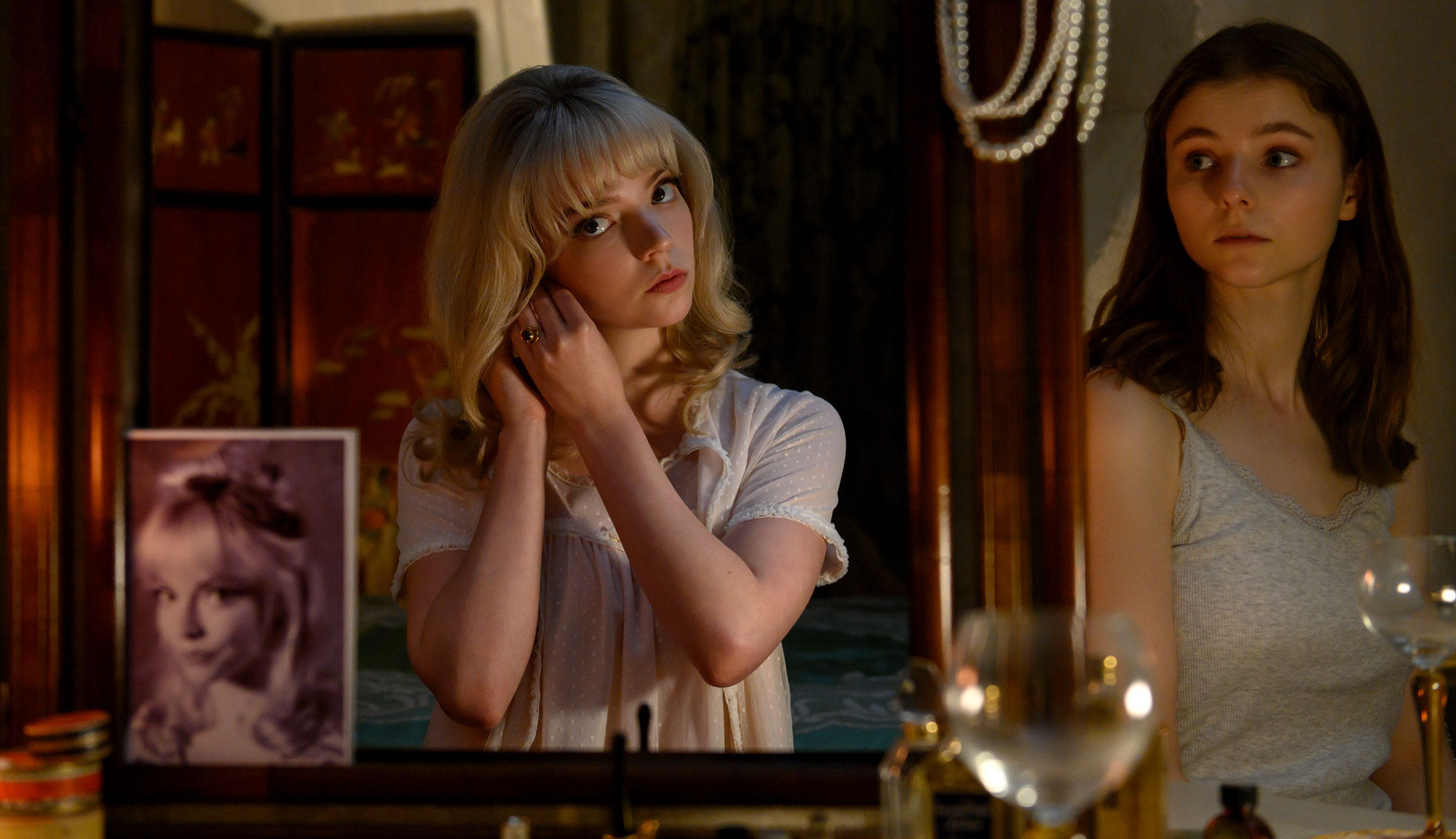 The world is full of people like Eloise (Thomasin McKenzie), or Ellie for short, the protagonist of Edgar Wright’s newest release, “Last Night in Soho.” She’s a country girl with a deep love of the 1960s and a dream of moving to the city to become a fashion designer. With the support of her grandmother (Rita Tushingham), Ellie is accepted into a London fashion school and moves to Soho. Her roommate, the insufferable Jocasta (Synnove Karlsen), forces her to move out of her dorm and into the top-floor apartment of a boarding home run by the nice but wary Ms. Collins (Diana Rigg, in her final role). Throughout her life, Ellie has seen visions of ghosts, most notably that of her mother (Aimee Cassettari), who committed suicide after dealing with mental illness. On her first night staying in her new apartment, Ellie dreams that she’s been transported to the 1960s, following the exciting life of a young starlet-to-be, Sandie (Anya Taylor-Joy), who strives to become a singer in the Soho nightclub scene. Her manager Jack (Matt Smith) wants to help her make that dream a reality, but we soon discover that his motives are less than pure. Ellie is entranced by this life that she leads vicariously through her dreams, but when that life turns sour and begins to intrude on Ellie’s waking hours, her dream quickly becomes a nightmare that she cannot escape.

Wright made his name on movies like “Shaun of the Dead,” “Hot Fuzz” and “Baby Driver,” building action comedies with an unceasing, kinetic editing style and self-referential scripts that grow richer with every rewatch. But “Last Night in Soho” is a different sort of animal, far less focused on editing tricks and visual comedy. The result isn’t necessarily conventional, but it’s far closer to it than anything he’s directed before and a continuation after “Baby Driver” to move away from the cult comedy world. Even the dalliances with horror that he’s had in the past (including quite a bit of “Hot Fuzz” and the “Don’t” trailer from “Grindhouse”) have plenty of levity that is not found in “Last Night in Soho.” That’s not to say it doesn’t have a style or utilize his talents — it just does so in an entirely new way. This is a straight-up horror suspense film, which might throw off the diehard Wright fans. Despite these changes in approach, “Last Night in Soho” still feels like an Edgar Wright film, complete with his love of licensed soundtracks and camera flourishes, and it’s fascinating to see his proclivities applied to a new genre.

Indeed, Wright displays here without a shadow of a doubt that he’s far more than a one-trick pony, even if that trick is one of the best ones out there. “Last Night in Soho” is a mesmerizing film — a stylistic and suspenseful foray into the seedy underbelly of the glamorous world of the swinging ‘60s. It exists at the intersection of “The Sixth Sense” and “The Neon Demon” with a story about the ghosts of the past that haunt everyone’s idealized view of the world of celebrity and fashion in a bygone time. McKenzie is the perfect ingenue, as her highest profile roles to date have been playing a mix of young adults in “Leave No Trace,” “Jojo Rabbit” and “Old.” However, there’s a poise to her — a sense of wonder and hunger in her eyes — that makes the seduction she feels genuine. Additionally, Taylor-Joy has such an otherworldly look, with her impossibly wide eyes and angular jawline, that she’s indeed the sort of beauty you would pick out in the midst of a crowded nightclub.

The one disappointment, though, is the selective use of the film’s central conceit. The first time Ellie sleeps her way into the 1960s and the whirlwind life of the mysterious and alluring Sandie, she and Sandie only exist as reflections of each other, swapping places as the camera swoops and pans across the mirrored architecture of a high society nightclub. This sequence, along with some establishing shots of Ellie’s “gift” in the opening act, surely seem to point to the idea that she can only see these shadows of the past through some sort of glass medium. It’s a restrictive approach, but one that can pay dividends in wow factor. And that first night does just that, so it’s a bit saddening to see Wright abandon the gimmick at times for some cheap if effective jump scares when Ellie’s mania truly takes hold late into the film. I’m sure that there’s a way to justify it — perhaps Ellie became so hopelessly engrossed in the circumstances that they broke free of their glass containment — but in reality, it serves to undermine the implicit rules of the piece.

That’s not enough to entirely upend the momentum of “Last Night in Soho,” though, thanks in large part to a twisty and satisfying finale. The film is a murder mystery, and, as one would expect, has its fair share of false positives, fake outs and diversions on its way to the truth. It remains to be seen how the true knowledge of the secret will affect future viewings of the film, but its revelations feel neither cheap nor unearned. It’s possible that I’m just in the bag for Wright as an artist; “The World’s End” and “Scott Pilgrim vs. The World” rank among some of my favorite films, and I’m always excited to see what he’s up to next. I will say that I’m personally a little less interested in this sort of work from him than his previous movies, but the quality and vision of his direction remains even with a marked shift in tone. Time will tell if Wright has (or even wants) a future in the horror suspense sphere, but “Last Night in Soho” certainly shows lots of promise.