Trending
You are at:Home»Vices»Drink of the Week: El Floridita 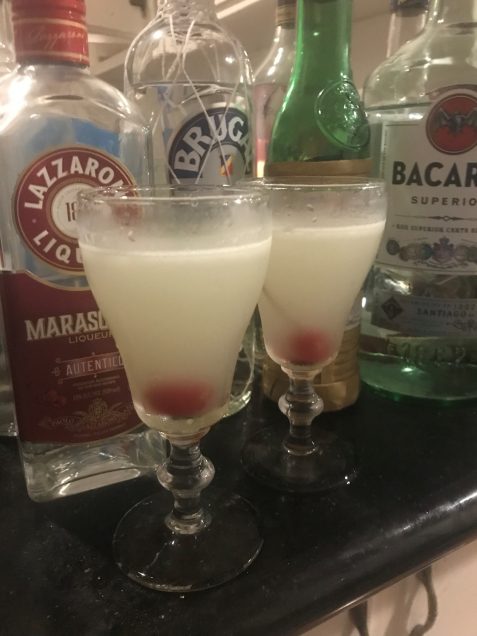 If you follow your local PBS station, you may have caught the characteristically sober and longwinded Ken Burns-Lynn Novick biodoc about the frequently drunk and legendarily terse Ernest Hemingway. The Nobel Prize-winning uber-author, who was plagued by multiple maladies and more demons, drank less for recreation than self-medication. He nevertheless had famously good taste in bars and bartenders and eventually had his own namesake daiquiri – but that’s not what we’re covering this week.

First, I want to start with the bridge between the Hemingway Daiquiri to come and the standard daiquiri I covered a million moons ago.

El Floridita is named for a legendary Havana seafood restaurant and bar where Hemingway, a part-time Cuban for most of his life, regularly drank. Depending on who you believe, it was either this drink or the Hemingway Daiquiri that Papa H. most frequently imbibed. My money’s on the El Floridita. Who orders a drink named after themselves? Moreover, it’s a nice, light, juice-heavy refresher and it wouldn’t be hard to knock back several if you were so inclined.

Combine all the liquid ingredients in a cocktail shaker with ice, cold and pure. Shake like hell. Shake it hard and true for a very long time. So long that you remember the time before, when all was merry and good. Strain it into a clean and well-chilled glass. Ignore my terrible Hemingway impression.

There are countless recipes for El Floridita. Some involve blenders for a much more sophisticated version of the alcoholic Slurpees that got me, and probably you, way boozed up when we didn’t know any better. There’s at least one Floridita that’s so radically different from this one I’ll have to save it for another post. I went with the simplest, most citrus-heavy, you might even say the healthiest, version of the drink I found. Some of the recipes call for adding sugar or simple syrup. I found, though, that the added sugar did very little and using more maraschino instead made for a subtly more flavorful cocktail.

I played around with several different brands of light rum. Brugal Extra Dry made for my favorite Floridita. Perhaps counterintuitively, perhaps not, the crisp dryness of the Brugal did a slightly better job of blending with the complex cherry liqueur than the marginally sweeter rums. The other base spirits were Flor de Cana, Bacardi (the baseline rum for most classic cocktails), and Cruzan. The Bacardi brought less flavor to the party but that’s part of the reason it’s so popular. It mostly just got out of the way. I should add that none of these brands are in any way expensive. Still, if you’re watching your pennies, Bacardi is the best buy but Brugal is just the best and, I think, worth the extra buck.