Nathalie Emmanuel is an English actress and model who became an international star when she joined the cast of “Game of Thrones” in its third season in 2013. Her stunning, exotic beauty and gentle manner in that series made her an instant fan favorite. That role turbocharged her acting career and made her a busy actress in Hollywood.

She was born on March 2, 1989, in Southend-On-Sea, a coastal area located in the county of Essex in England. Her mother had Dominican and English roots, while her father had Saint Lucian and English roots. With Nathalie the results were spectacular.

Nathalie credits her mother for encouraging her acting career. “When I was 3, I’d always cause drama that my mum decided maybe I should channel it properly—so she started me on acting, singing and dancing classes.” She had some acting roles as a child, and in 2006 she made her television debut with the British soap opera “Hollyoaks” as Sasha Valentine.

Nathalie has become a very busy actress, taking on the role of Ramsey in the “Fast & Furious” franchise along with other movie roles. In 2021 she starred in “Army of Thieves” along with “F9.” With her beauty and talent we can expect to see much more of her over the years to come.

You can follow our Nathalie tag for our latest Nathalie Emmanuel updates.

Nathalie Emmanuel created quite a sensation when she joined the cast of HBO’s “Game of Thrones” in season three as Missandei, the quiet but wise slave girl who became a handmaiden to Emilia Clarke’s Daenerys and grew into her trusted advisor. She first heard the news of winning the role in the show while working as an assistant at a clothing store.

Missandei’s importance to the story grows with each season, and Nathalie is excellent in the role. She’s also stunningly beautiful, and the producers take advantage to showcase her in a variety of sexy and stylish outfits, along with some amazing nude scenes. Her exotic looks were the perfect complement to the blonde and fair-skinned Daenerys. 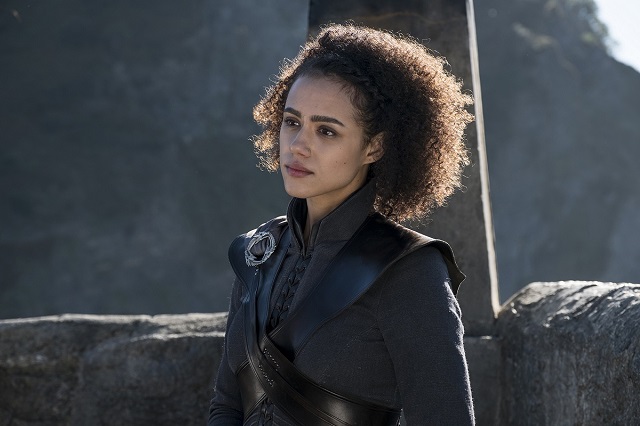 “Misfits” (2011)
Nathalie appeared in episode one of season three in this British TV series, and gave everyone a nude booty shot for the ages!

“Holly Slept Over” 2020
This is easily Nathalie sexiest role, as she plays Holly, a college friend of Audra played by Britt Lower. Audra is married to Noel and they’re both lawyers. Holly comes to visit them, and Audra confesses to Noel that they had a fling in college as a lesbian experiment. Noel of course ends up being attracted to Holly, and the movie dials up the sexual tension and gives us a threesome along with Holly and Audra having some hot kissing scenes. Nathalie and Britt are both amazing in these roles and dial up the sex appeal. Nathalie is brilliant as the charismatic Holly, giving us a much different character than the reserved Missandei. See clips of these hot scenes here and here.

GQ Interview and Photoshoot
The gang at GQ interviewed Nathalie in 2015 and took some amazing photos as well.

Nathalie video interview
She discusses the “Fast & Furious” franchise and her role as Ramsey. We love her English accent!

Nathalie Emmanuel Looks Amazing in a Bikini
Wow . . . love this video! The booty shots are fantastic . . .