Trending
You are at:Home»Vices»Drink of the Week: The Martinez (Whitley Neill’s Take) 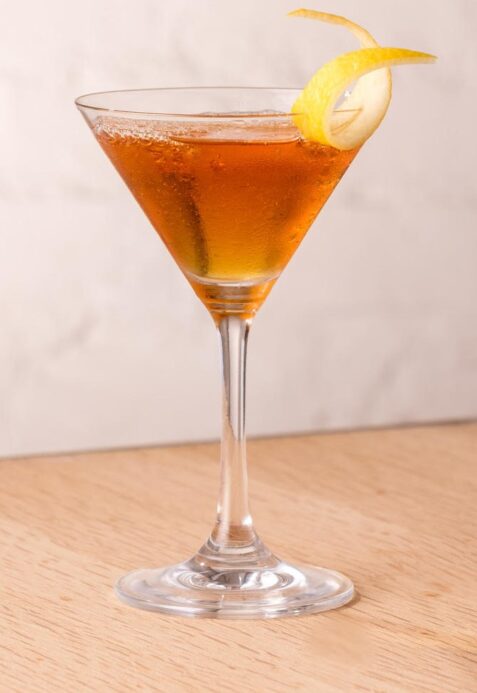 The Martinez is a drink that’s about as old as the telephone but maybe somewhat younger than the electric lighbulb. Many believe it’s the ancestor of the Martini — and a “dry Martini” might have once meant simply using dry vermouth instead of the sweet stuff, as opposed to using very little vermouth at all.

It doesn’t really matter. Mixing sweet vermouth with gin makes a lot of sense, and brings us pretty darn close to a gin Manhattan. I covered the Martinez in 2015, but that version was pretty different, being comprised of equal parts gin and sweet vermouth, making it something like a Fifty-Fifty. Now, we have a drink that not only lowers the proportion of vermouth but uses dry vermouth alongside the sweet. That makes it something like the gin version of a Perfect Manhattan, though the proportions are a bit odd.

But there’s more to it than that because this week’s drink is brought to you by my mysteriously free bottle of Whitley Neill gin. This is a gin with a subtly different flavor than what you might expect. For a dry gin it’s got more of an orangey sweet   flavor and less of the perfumey notes than you sometimes get but there’s a little extra bitter earth there. It’s a young product by booze standards. It was developed by distiller Johnny Neil in the 21st century, though he claims a familial heritage of gin makers going back to the 18th. It’s still somewhat new to American store shelves and it’s available for about $30 a pop, which is about right for a premium gin brand. They tell me it’s available at select stores — ask for it if you can’t find it in your area.

Gin fanciers especially will want to give Whitley Neil a spin, and I think this Martinez is a pretty great way to do it.

Combine the liquid ingredients in a mixing glass or cocktail shaker with plenty of ice. Stir vigorously for at least 15 seconds or so and strain into a chilled cocktail glass that is on the smaller side. Sip and note a certain intriguing freshness in the flavor.

My vermouths this time, both sweet and dry, came from Martini and Dolin, the sweet Dolin versions tasting a bit sweeter because it’s actually sweeter and a bit more floral because it actually is a bit more floral than some of its cheaper competition. It also seems to work fine if you mix and match a bit. I tried both Luxardo and Maraska maraschino and both were good, though using the former produced a slightly richer mouthfeel, I think.

However, the most dramatic change in ingredients occurred when I suddenly realized I hadn’t changed the water filter that connects to the ice maker in my refrigerator. It made the flavor cleaner and crisper and was a really nice kick in the pants. Change your water filters occasionally. (Though maybe somewhat less often than manufacturers tell you to. When they say “for best results” they might mean for their bottom lines.)

Finally, about those odd proportions. As far as I can figure it, there’s no way to be 100 percent precise about .3 and .6 of an ounce. I could be wrong but I wasn’t able to figure out an direct equivalent in teaspoons. Probablly has something to do with the drink being originally made with metric measurements. I mainly eyeballed it.

Sadly, I must warn you against rounding off to make the drink a bit easier to pull off. I tried this Martinez with a more normal 1/2 ounce of both sweet and dry vermouths. It wasn’t good. Mixology is a word that gets bashed some, but there’s definitely a science to it.