Trending
You are at:Home»Vices»Drink of the Week: The Dubonnet Cocktail 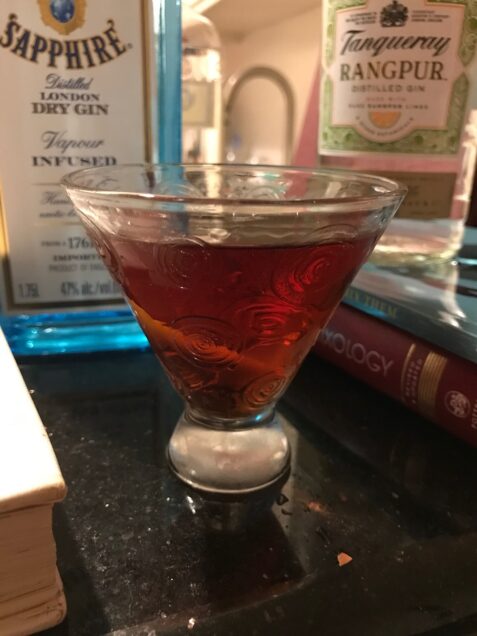 After doing these weekly posts for over eight years you’d think there wouldn’t be many significant cocktail ingredients left that I hadn’t yet at least tasted. Not really.

This week I get to strike Dubonnet off that very slowly shrinking list. It’s a red wine that’s been fortified (boozed up) and aromatized (herbally fragranced up). It’s sweet, but a great deal less so than it’s first cousin, sweet vermouth. I’m not sure whether or not it’s made from actual red wine or if, like what used to be called Italian vermouth, it starts as a white wine and is made red during the sweetening and herbifying process. Among the herbals, Dubonnet contains just a bit of bitter quinine. The drink was, we’re told, concocted during the mid 19th century as a way to get the members of the French Foreign Legion to drink the bitter malaria-combating bark-derivative.

While many classic cocktail components have only been revived recently, this is one that never came close to going away despite not exactly being a household name in the US. Even though I’ve just recently tasted if for the first time, I’ve known of its existence since childhood because it was advertised fairly heavily in the 1970s. I can almost hear a radio jingle with the line “tingle to the touch of Dubbonnet,” I can’t find that jingle online and it makes no sense, so let’s assume I’m actually remembering a bubble bath commercial.

Dubonnet commercials have featured Tom Selleck and Farrah Fawcett — before they were famous — and the notorious Pia Zadora after she achieved her version of fame. It’s greatest public attention, however, is due to it’s connection to the ladies of the Windsor family. To this day, it is enjoyed by Queen Elizabeth II as it was by the Queen Mother before her. The royals are believed to take a version of a the Dubbonet Cocktail that’s different enough to merit it’s own post and which I hope we’ll eventually get to.

Most versions of this Dubonnet Cocktail feature equal parts gin and its namesake aperitif, but I prefer a gin-forward version that I think is an invigorating, slightly sweet alternative to a martini. Like a martini, your choice of gin will matter a lot.

Pour the liquid ingredients into cocktail shaker or mixing glass and stir vigorously. Strain into a chilled cocktail glass, add the twist of citrus and sip thoughtfully. Discern the botanicals!

Martinis aside, most gin drinks that are awesome with your favorite premium or super-premium expression are still pretty damn good with a decent cheap brand like my value go-to, Gordon’s. At the proportions above, however, this is a major exception. At least with that particular brand, it’s nasty — and I’m convinced Gordon’s makes a perfectly acceptable Martini. The Dubonnet seems to cover up all of the more pleasant flavors, leaving only an abrasive bitterness. If you’ve only got a cheap gin on hand, I’d go with equal parts and keep my expectations low

With this drink, I’d stick with the unusually good stuff. Bombay Sapphire — a product I formally found too busy tasting but have recently grown fond of — is set off extremely nicely in the Dubonnet Cocktail, adding some sweetness but still allowing the drinker to appreciate the aromatics in both the gin and the fortified wine. I’ve also gained a new appreciation for the citrus accented Tanqueray Rangpur with Dubbonet, it’s an unusually attractive pairing.