Trending
You are at:Home»Vices»Drink of the Week: The Quiet Man’s Kick 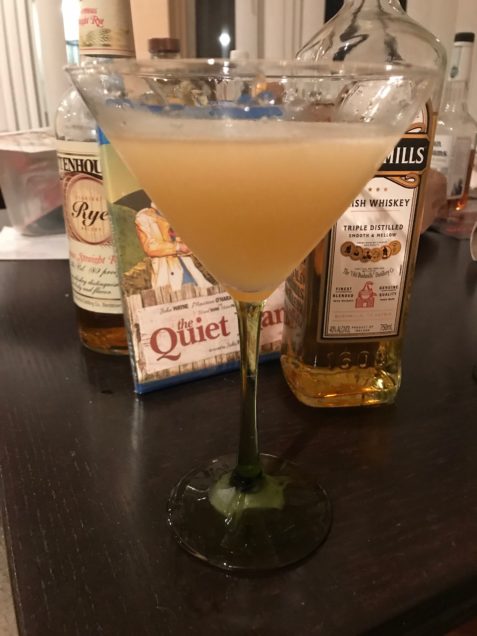 For me, the best thing about St Patrick’s Day is that it’s an excuse to play around with Irish whiskey.  I’ll never understand why this mellow, easy drinking spirit isn’t considered more mixable. As a holiday, however, St. Paddy’s  is something I can take or leave — I prefer my bars not too crowded and the mixologist not under maximum game day pressure. Also, the great Tom Bergin’s notwithstanding, my hometown of L.A. is more of a Cinco de Mayo kind of a place.

Here, the Irish are just another strain of white person, much like the Italians, the Poles, the Germans, and so on. Other than we Ashkenazim, no Caucasoid ethnic settled in Los Angeles in sufficient numbers to really register. And so it is that the only group that really gets behind St. Paddy’s in L.A. are the drunks,. Of course, what many Americans of all ancestries don’t get is that Ireland isn’t really all that excited about March 17 themselves. A former colleague of mine once found himself in Dublin on the 17th and asked a random local where a good place to celebrate St. Patrick’s Day was. He suggested Boston.

Anyhow, I like Irish whiskey and most other Irish things. It therefore makes sense today to blend Irish whiskey with one of our quintessentially American brews. I’ve tried this once before with with my liquid homage to John Ford’s “The Quiet Man.” This time, however, I took inspiration from Cameron’s Kick, a revived depression era blend of Scotch and Irish whiskeys popular on the East Coast . Okay, I actually just stole it and switched out Scotch for rye. Nevertheless, I think it works.

Combine the ingredients in a cocktail shaker with lots of ice. Shake as if you’re trying to subdue a tiny but really annoying leprechaun inside your tumbler, and strain into a large, chilled cocktail glass. Sip, and contemplate the contribution of Irish-Americans to the American myth. Try to ignore Whitey Bulger and Michael Flatley.

My whiskeys this time ’round were famed old standby Bushmills and Tullamore Dew, which is less well known Stateside but is actually the world’s second best selling Irish whiskey. (#1 is Jameson.) They’re both outstanding, easy going whiskies, but the latter offers a bit of additional spice to go with the gentleness. My relatively ungentle ryes were 100 proof Rittenhouse, 95  proof Bulleit, and 90 proof Jim Beam Pre-Prohibition Rye, which is clearly aiming for the classic cocktail market. While Rittenhouse tends to be my default rye, I’d have to say that Bulleit is probably the best of the three with a certain caramel overtaste I very much enjoy.

Put together, with lemon juice and the orgeat balancing each other out rather beautifully, Rittenhouse and Bushmills made for a very lovely combination in the Quiet Man’s Kick, with the almond notes playing rather beautifully with the two whiskeys. However, combining Bulleit and Tullamore Dew proved downright extraordinary with a flavor that was slightly less nutty — a bit like  a lemon drop candy dipped in butterscotch. When I decided to go alliterative and join Bushmills and Bulleit, a temporary Torani’s deficiency forced me to substitute falernum, a very sweet liqueur with some almond in it. It was fine. I was shocked, however, to find that I really didn’t care for the drink at all when I combined Bushmills and Jim Beam. For whatever reason, none of the almond orgeat notes came through and what was left was like sweetened dishwater. Still, I wouldn’t hold it against either product. These things happen.

And now it’s time to salute the influence of the Irish on the rest of the English speaking world.