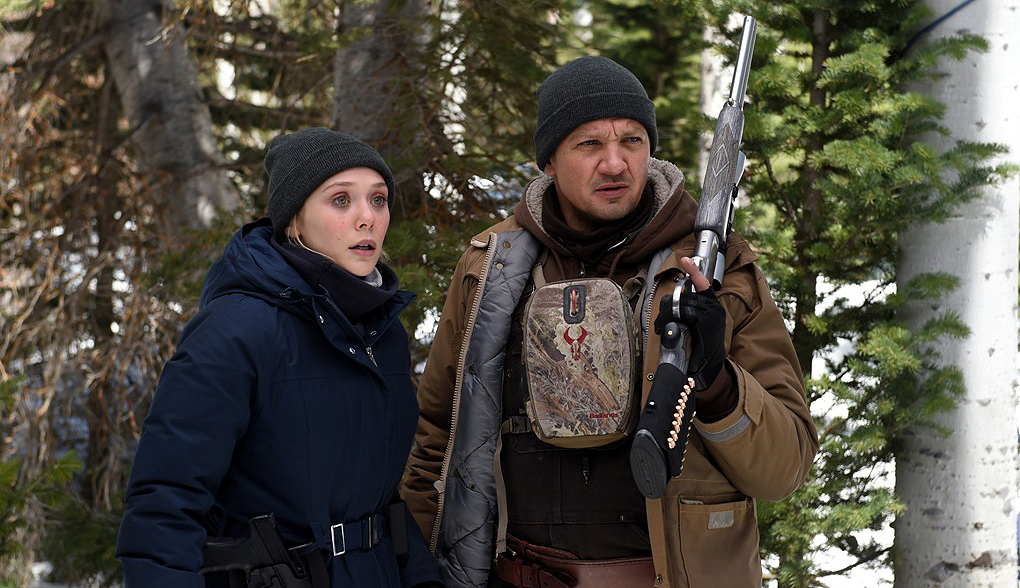 Though the era of the American Frontier has long since passed, the spirit of living on the edge of the unknown lingers in many parts of the country. A gray morality, punctured by acts of savagery and a unique interpretation of justice, permeates these isolated lands with people living by their own sets of codes. Taylor Sheridan, the writer of “Sicario” and “Hell or High Water,” tackles that theme again in his directorial debut “Wind River” by looking at what it means to live in a different type of border town, this time on the Wind River Reservation in Wyoming, and the type of hardening that the soul develops in such a cold place. Anchored by terrific performances, memorable dialogue and a rising tension that’s set to explode, “Wind River” is another terrific profile of a group of people often overlooked and what they do in the shadows of exclusion from mainstream society.

When professional hunter Cory Lambert (Jeremy Renner) discovers a young Native American woman dead in the forests of the Reservation, the FBI dispatches special agent Jane Banner (Elizabeth Olsen) to investigate the matter. Lambert, with his excellent tracking skills and knowledge of the land, is drafted to help Banner and the Bureau of Indian Affairs find the person or persons responsible and bring them to justice. Hanging over this whole affair is the bitter cold of the remote location, the still-present memory of a personal tragedy in Lambert’s life, and the rocky terrain of the landscape and its people that must be traversed to get at the disturbing truth of what happened.

“Wind River” is a gripping and beautiful film that expertly crafts a mounting sense of dread and tension as the investigation proceeds. While Sheridan has proven his superior writing skills in the past, he also shines as a first-time director with his latest story. He gets great performances from his cast, especially Renner, who centers the film as the outsider that doesn’t belong to any group and yet is a product of the land on which they live. Sheridan takes audiences on a twisting road of unfortunate circumstances to uncover the truth, and he does so in a way that brilliantly engages viewers and draws them ever closer to the story being told. This murky world of suspicion is combined with some incredible shots of nature, its pure snowbound mountains and forests suggesting a peaceful locale, belying just how dangerous, and even deadly, the cold and elements can be to those who live there – both literally and metaphorically.

In addition to Renner, the film also boasts excellent turns by Graham Greene as the pragmatic and pithy chief of Wind River’s Bureau of Indian Affairs and Gil Birmingham as the father of the dead girl. The other cast members all lend their own authenticity and power to each scene, but these two supporting actors shine in their roles and really connect with the audience through their humor and pathos. Additionally, while Olsen does a great job as the novice FBI agent, it’s a shame that she isn’t given more to do. It makes sense why her character has such limited development – the movie couldn’t really support another tragic backstory – but given how good she is in the part, it feels like a waste of her talents.

The other issue with the film is a small one, but there are many instances where a certain point is made repeatedly through dialogue. “Less is more” is an almost meaningless axiom these days, but it would have been helpful if someone had suggested that Sheridan pare down some of the dialogue. There are great lines and powerful insights conveyed in the dialogue, but occasionally, they’re undercut by Sheridan’s need to further explain exactly what characters meant when they said a particular line. It doesn’t occur so often that it derails the movie or hurts it irrevocably, but it happens enough that it falls on the ear with a bit of a thud, especially when the majority of scenes are scripted perfectly.

“Wind River” is a tense journey to discover the truth and attempt to find justice in a frozen land that seems hell-bent on denying either. Propelled by smart and authentic dialogue, strong characterizations and the occasional burst of brutal violence, the film is a testament to Sheridan’s abilities as a storyteller and filmmaker. It takes a bit to get going, a deliberate pacing that increasingly amps up as the movie ratchets towards its blood-strewn conclusion, but it is always engaging. Sheridan has crafted another neo-western in the vein of his last two films and once again dares look at the savage face that hides just out of sight of “normal” society. The era of the American Frontier may be gone, but its spirit still beats in the hearts of many people throughout this land. By peering into those hearts of darkness, Sheridan is able to illuminate society’s tendency to overlook so many and its need to pretend to adhere to a strict moral code in a world without one.