Trending
You are at:Home»Entertainment»Movies»Movie Review: “The Hitman’s Wife’s Bodyguard” 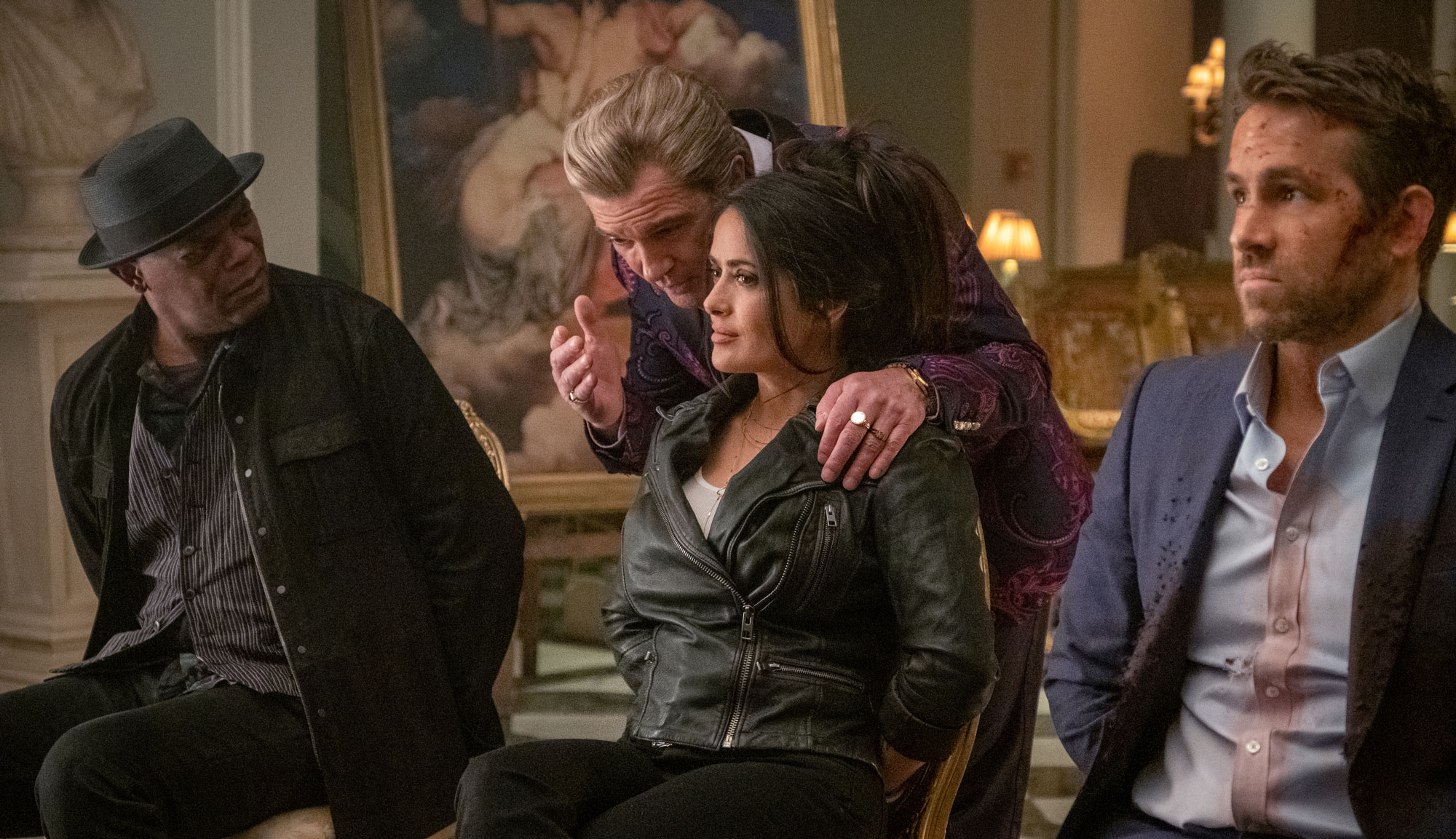 Remember how odd it was in “Back to the Future Part II” when Marty McFly was suddenly given a new personality trait where he couldn’t stand to be called “chicken”? It was a strange addition to the character that was seemingly only invented for specific plot conveniences and to provide the protagonist with some form of an arc across the sequels, but in doing so, it created a weird rift between the new Marty and the hero that audiences enjoyed in the original movie. A lot of that happens in “The Hitman’s Wife’s Bodyguard,” with Ryan Reynolds’ Michael Bryce changing from the overly cautious (but very effective) protector into a bumbling fool that tends to be the brunt of most jokes. It’s an awkwardly forced contrivance rather than an imaginative expansion of the first story. That’s “The Hitman’s Wife’s Bodyguard” in a nutshell; for the most part, it chooses to go into broad territory that is, at best, loosely born from the previous entry. Though there are some standout moments and one performance that elevates the film, ultimately, it feels like it was made by people who only vaguely recall the original.

After his ordeals with professional assassin Darius Kincaid (Samuel L. Jackson), Bryce didn’t get his AAA rating bodyguard status renewed and has been stripped of his bodyguard license. His therapist insists that he go on vacation to put some distance from his previous action-packed lifestyle. But when Darius’ wife, Sonia (Salma Hayek), crashes Bryce’s relaxation amidst a hail of bullets to enlist him in freeing her recently kidnapped husband, the trio find themselves in the crosshairs of an Interpol agent (Frank Grillo) and a Greek magnate (Antonio Banderas) who is intent on making all of Europe pay for how the EU has treated his financially insolvent country.

Director Patrick Hughes and writer Tom O’Connor were both involved in the first film, which makes the tonal, narrative and character changes in “The Hitman’s Wife’s Bodyguard” even more perplexing. The 2017 original wasn’t such a ubiquitous success that people were invested in the story and growth of its characters, but everything gets turned up higher and becomes mostly noise; the stunts are bigger, the nefarious plots produce higher stakes and what were previously just quirks become defining traits that make the characters less developed. The attempted comedy is ratcheted up as well — not in terms of quality but the sheer number of jokes and their reliance on more cartoonish visuals.

The differences between the two films aren’t drastic, but the sequel feels sloppy and banal in comparison. For instance, while Bryce mourned his loss of status when he was no longer “AAA-rated” in the 2017 movie, he was still working as a bodyguard and being a badass in his own anal-retentive manner. In the new film, he’s not allowed to bodyguard at all due to the loss of his rating, and most people seem to know about it, as it appears everyone keeps up with the inner workings of the bodyguard industry. Additionally, Banderas’ antagonist has a ridiculous plan befitting of a James Bond supervillain that is a far cry from the previous entry, where the bad guy was avoiding crimes against humanity charges at the Hague, while one of the central subplots of the last film — Bryce’s affection for Interpol agent Amelia Roussel (Elodie Yung) — is never brought up even once.

When divorced from these unnecessary inconsistencies, there are some strong moments in “The Hitman’s Wife’s Bodyguard.” The biggest source of joy comes from Hayek, who goes so far over the top that it’s like Nicolas Cage as Tony Montana. It’s not a subtle performance, and most of the jokes are basically irate sitcom wife writ large, but the actor sells the hell out of the role by breathing so much energy into every scene. Even her quieter moments are funnier and land better thanks to the barrage of furious anger that she exudes in other sequences. Reynolds does the same quippy stuff that he does in most of his movies these days, but he does it well. Jackson, meanwhile, is oddly pushed to the background for a lot of the shared scenes, which is a weird choice, as he’s fully engaged in his comedic badass role while possessing strong chemistry with his co-stars. When the three leads can simply talk and hang out, it’s genuinely fun and shows what could have been.

The bodyguard business strata, the megalomaniacal Banderas and the many waves of assassins suggests that “The Hitman’s Wife’s Bodyguard” could have been a fun take on “John Wick: Chapter 2” by creating a far more intricate and involved heightened reality brimming with nefarious organizations and gunshots to the head. Instead of going that route, the plot is ramshackle, and the tacked-on license/rating bit feels idiotic from the jump. Additionally, most of the action sequences are far too reminiscent of the mismatched buddy action films that have become clichéd since at least the third “Lethal Weapon.” This contributes to a lack of any sort of emotional investment (outside of protecting Hayek at all costs, as she’s an international treasure). That sounds pretentious for a movie called “The Hitman’s Wife’s Bodyguard,” but it’s how you get audiences to truly react to and remember the film. Action sequences land better when it seems like there’s real danger. Similarly, humor fares better when it’s grounded in real characters because it makes the situations more absurd.

“The Hitman’s Bodyguard” was a fine movie that soared mostly on the chemistry of its two leads with some good comic dialogue and action sequences. It was a fleeting diversion that was entertaining but also disposable. “The Hitman’s Wife’s Bodyguard” seems intent on doubling down on that throwaway nature by removing any real sense of character or engaging arcs, replacing it with goofy stakes and goofier comedy, and stringing it together through multiple scenes that evaporate from the mind the minute you leave the theater. There’s some great chemistry among its stars, the occasional solid joke and Hayek’s fantastically bombastic performance, but it’s a step down from its predecessor. It would be an okay movie to catch on TV on a Sunday afternoon — just don’t expect it to linger after the screen goes dark.