Trending
You are at:Home»Vices»Drink of the Week: The Frisco Sour 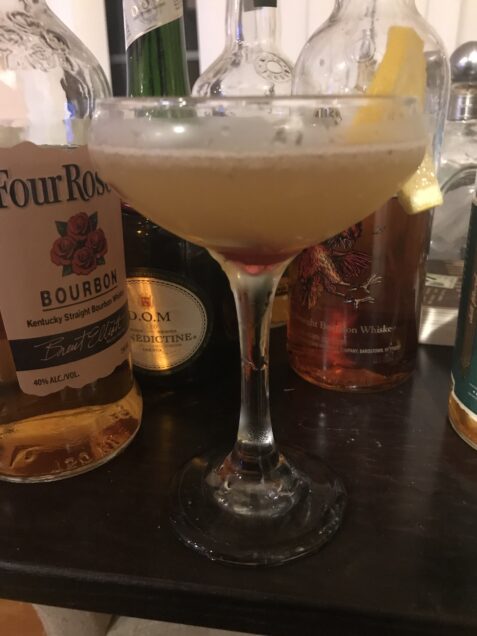 The Frisco Cocktail goes back to Prohibition and perhaps even to some ancient time when San Franciscans wouldn’t sneer at you for calling their town “Frisco.” The Friscans might be just touch precious but it’s a great town and I’ve been feeling quite proud of my home state of California. A drink named after the Golden State’s first signature city seems apt.

Here’s where it gets weird, though. I just now procrastinated by picking up my cellphone and looking at Facebook, where a friend of mine posted a link to an article that kind of blew what’s left of my mind. Today, April 15, 2020, is the 170th birthday of the city of San Francisco. That’s a fun coincidence but, get this, 4/15 also happens to be your humble scribe’s birthday! I get a lot of tax day jokes (and this year about how it’s not tax day) and I love to tell people how the Titanic finished sinking and Abraham Lincoln finished dying on my birthday. I also share it with Emma Thompson, Bessie Smith, Chaka Khan, Emma Watson and a very nice coworker at my day job, I just found out.

I had no idea it was also the birthday of one of my favorite cities. As the city’s legendary (but also kind of annoying) columnist Herb Caen pointed out accurately a million years ago, it’s a city in love with itself and it loves to gaze at its navel.  Understandable and in that it’s a pretty gorgeous navel.

Combine the liquid ingredients in a cocktail shaker with lots of ice. Shake very vigorously and strain into a chilled cocktail glass. Sip and contemplate just what a wealth-mecca like San Francisco, Manhattan, or the Westside of LA might look like in a few years time. Will they become hollowed out or more humane?

I tried a few different versions of this drink and this is one where people like to tinker with the proportions.  Even the recipe that is apparently used at the famed and recently bicoastal bar, Employees Only, didn’t beat it — it was, as sours go, a little too sour for me — and this is a pretty sour sour to begin with. Adding lime juice on top of the lemon juice? Nah.

I did, engage in my favorite game with these drinks and tried a number of different ryes, including the ryes from Wild Turkey and Dickel, as well as Templeton, a personal favorite of mine that I recently gifted myself with. All were very good and I’ve found that you can mellow out the sour by adding a cocktail cherry and, counterintuitively, a lemon wheel.

However, I read in one post that in the many years where the kind of ryes we take for granted today were pretty much impossible to find, the drink was made with bourbon. The writer suggested that the sweetness of the bourbon might further mellow things out. And, surely enough, Four Roses bourbon shaved down the tartness in a way I quite like. 103 proof Fighting Cock defnitely added some fire but was still a nice counterbalance. I finally did as the post suggested and tried it with Gentleman Jack, which is Texas whiskey, a close but not identical sibling to bourbon. It added a touch of woody sophistication. Time to reconsider messing with Texas.