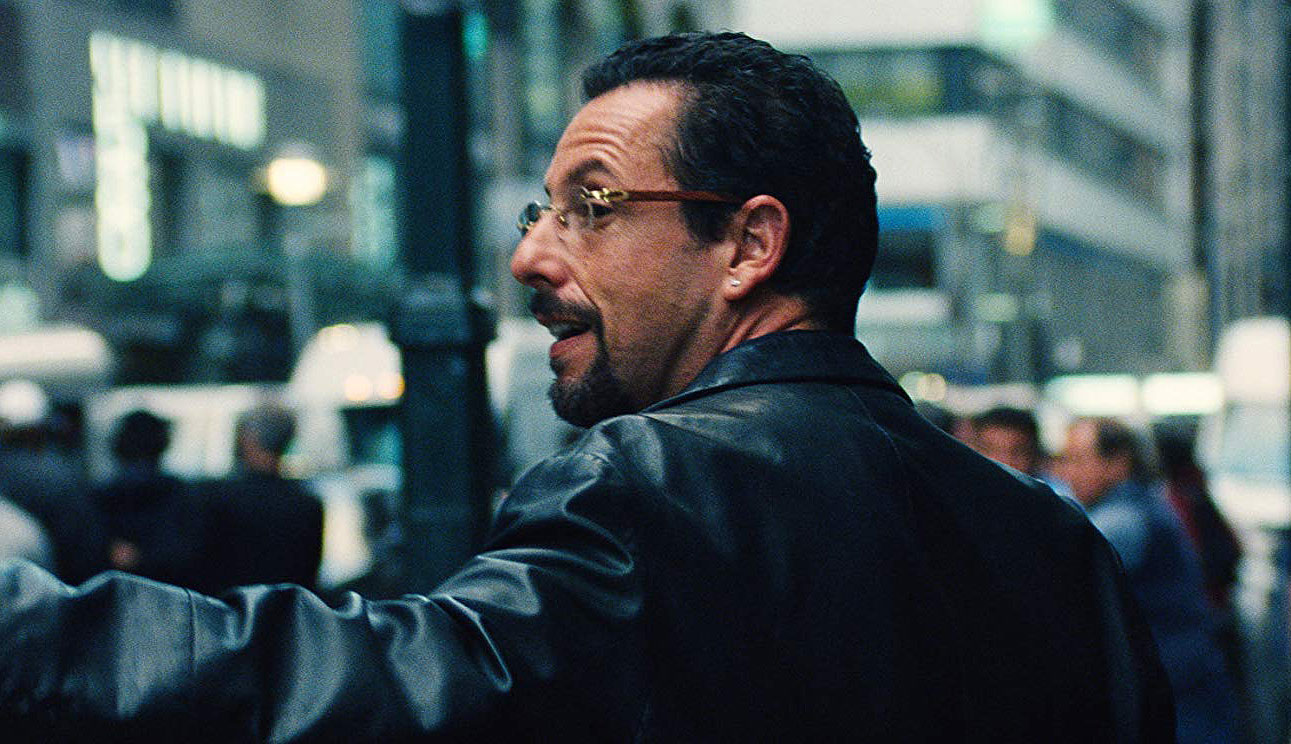 Josh and Benny Safdie do not make movies for the masses. The New York natives have been making features for a decade now, though they arguably didn’t become names on the independent scene until 2014’s “Heaven Knows What.” Both that film and their follow-up, the 2017 Robert Pattinson vehicle “Good Time,” take place on the grimy, slimy streets of New York – throwbacks to a bygone era of seediness with a particularly modern flair. Heroin addicts, petty criminals, the dregs of the Earth – these are the subjects of the Safdies, whose films have been marked with a kinetic energy that resembles an unceasing panic attack. Anyone who read interviews with the Safdies leading up to those films likely heard about a project they’d been working on since they started making features called “Uncut Gems,” set in New York’s Diamond District. Now, “Uncut Gems” is finally seeing the light of day.

Howard Ratner (Adam Sandler) owns a jewelry store and uses the money he earns from activities both licit and illicit to feed an out of control gambling habit. As is always the case with inveterate and compulsive gamblers, Howard racks up debts across the city with all sorts of questionable types, and those debts are destined to come due. But he has an ace up his sleeve – an uncut black opal he imported from Africa that he’s expecting to auction off for seven figures. When one of Howard’s associates (Lakeith Stanfield) introduces him to NBA superstar Kevin Garnett, he becomes enamored with the opal and borrows it from Howard under the belief that it will bring him good luck in their playoff series against Philadelphia. When he doesn’t want to give it back, Howard’s fragile life is thrown into chaos. With his wife (Idina Menzel) threatening divorce after Passover and his girlfriend/employee (Julia Fox) becoming more unhinged by the day, the maelstrom is unceasing.

There are plenty of comparisons that can be made to “Good Time,” another movie about a less-than-perfect person racing against time to get money before the hammer drops on him. Sure, Howard is theoretically a member of polite society, with a beautiful house outside the city and a beautiful apartment for his mistress inside it. But his life is all seedy jewelry stores, pawn shops and back-alley bookies, borrowing, hawking and short-selling his own merchandise so he can get the scratch for his next bet. The longer he chases that perfect score, the perfect bet to make all his troubles go away, the more unsavory sorts he gets on his bad side. Because of this breakneck approach to life, “Uncut Gems” is just as stressful and erratic as its predecessor even without the one-night-to-set-things-right motif undergirding it. The result is unyieldingly propulsive; we have no time to breathe because he has no time to breathe.

Sandler is getting all the press coming out of this, and with good reason. He’s a remarkable casting choice, taking advantage of his caustic personality and titanic temper mixed with a healthy helping of charm and charisma that totally explains how he can dig himself in so deep and somehow still get people to go along with his crazy schemes with the preternatural power of needling them into submission. You want him to succeed somehow, but you also definitely want him to get punched in the face for his trouble. He’s the perfect antihero in that sense, and while it’s been seemingly ages since he’s consistently challenged himself as an actor, his work here and in last year’s “The Meyerowitz Stories” prove definitively that he’s got gas left in the tank.

He doesn’t leave much room for the rest of the cast, but Lakeith Stanfield is as magnetic and dependable as ever, and Julia Fox impresses as a relative unknown. Garnett hasn’t acted before in any real capacity, but his outsized personality mixed with his prodigious stature make him a striking figure. Most importantly, everyone feels like they belong in this world, no matter how small the role. The Safdies have always excelled at populating their worlds with all manner of exciting and engaging lowlifes via actors both seasoned and not, but all of them feel of a piece.

Nothing is awkward or out of place, and considering the pacing, it’s amazing how meticulous it all feels. It’s clear that the Safdies know what they’re doing and what they want to make, marrying aesthetics and storytelling in such a forceful way. Many of their former collaborators have returned for “Uncut Gems,” from “Good Time” composer Daniel Lopatin to longtime co-writer/editor Ronald Bronstein. Respected cinematographer Darius Khondji (“Okja,” “Seven”) is new blood for them, but you’d hardly notice; he’s plenty comfortable playing in their high-octane sandbox.

“Uncut Gems” asks so much of its audience that it’s a draining and stressful experience to endure. Over 130 minutes, we see a man deservedly put through the wringer and then, when he seems to finally put everything behind him, happily jump right back in. It’s tense and stressful – the filmic equivalent of a nervous breakdown. Time will tell how many of these sort of films the Safdies have in them because it has to be just as exhausting to shoot them as it is to watch them. But as long as they have the energy, they’ll have the audience. “Uncut Gems” is a massive achievement and their best movie yet, and it’s quite the antidote for the cheery holiday season.