Trending
You are at:Home»Vices»Drink of the Week: Waterloo Bridge – TCM Fest 2019 Salute #2 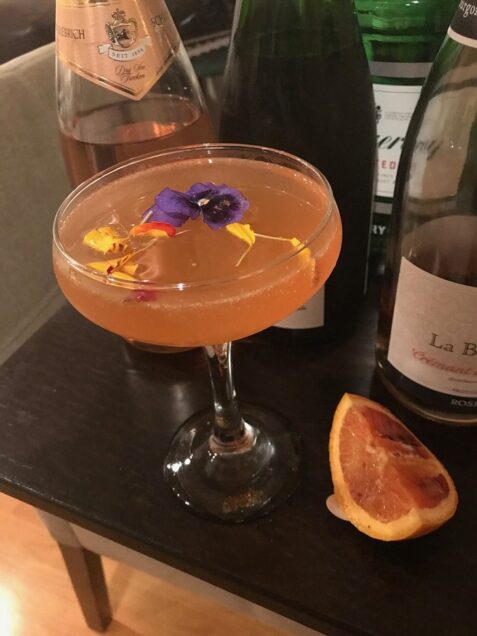 The official theme of the 2019 TCM Film Festival was love at the movies and, sucker that I am, I saw two films that hit me quite a bit harder than expected. One was  “A Patch of Blue,” a 1963 Sidney Poitier drama gingerly dealing with a tentative but intense interracial relationship, proved to be far more involving and moving than I was really prepared for. Alas, naming a drink after that would involve blue curacao — which would not feel right — and a kind of molecular mixology well above my paygrade. Also, Shelley Winters’ vile boozing ultra-racist is enough to put anyone on the wagon for months.

That leaves us with the doomed romance of the 1931 version of Robert Sherwood’s play, “Waterloo Bridge,” this version directed by the great Universal director James Whale, best remembered for “The Bride of Frankenstein” and as the inspiration for Ian McKellan’s character in 1998’s “Gods and Monsters.” Like his almost equally hard to see 1936 musical adaptation, “Show Boat,” it was later remade in a more glossy MGM outing that has largely eclipsed it. It’s a shame, because this version, though raw and badly in need of a restoration it may never get, thanks to studio efforts to erase the movie, is concise and powerful.

It stars Mae Clarke — who deserved much better than to be remembered primarily for getting a face full of Jimmy Cagney’s grapefruit in “Public Enemy” — in a heartbreaking but self-pity free portrayal of a down-on-her-luck expat American chorus girl who meets an idealistic solider (Douglass Montgomery) on London’s Waterloo Bridge. Since he’s from the US by way of the Canadian army, he doesn’t realize its the place where London prostitutes most often picked up soldiers during the first great war. The story resolves itself in unexpected fashion, especially when it comes to the young’s man family, which includes an incredibly young and innocent Bette Davis as his younger sister and a mom (Enid Bennett) who turns out to be both deeply old fashioned and far ahead of her time. And, don’t expect a happy ending.

Of course, a drink should never be a tragic experience, so I tried to come up with something gentle, yet sturdy. Rose colored, but not deceptive. It’s also World War I, so a twist on a French 75 seemed like an idea.

Combine all the liquid ingredients except for the champagne in a cocktail shaker and shake vigorously. Strain into a chilled coupe and figure out a back-up plan for a failed show business career more promising than sex work. 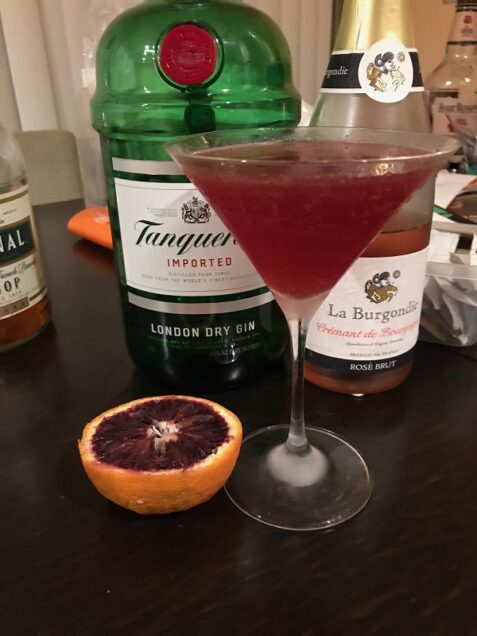 Much like love, the best version of my Waterloo Bridge is hard to find and harder to replicate. The best tasting version used the darker, redder moro blood orange cultivar with an appearance that was maybe too dark for what I was going for, but damn, was it good. Then, I ran out of the moro oranges. (I’d used up most of them on a failed attempt to do this drink with brandy.)

It’s May, which means that blood oranges should actually be out of season here in California, but our incredible rainy season appears to have made them more plentiful for longer. I wasn’t necessarily looking for a lighter shade, since that dark red one (pictured left) was so tasty. Still, the lighter Tarocco is what I could find. When I tried it with a not-so dry rose, it was a disappointment. With Marlboro Brut Rose from New Zealand, however, it was just fine…but not same. And nowhere near as wonderful as Mae Clarke.