Trending
You are at:Home»Vices»Drink of the Week: Bourbon Hot Toddy 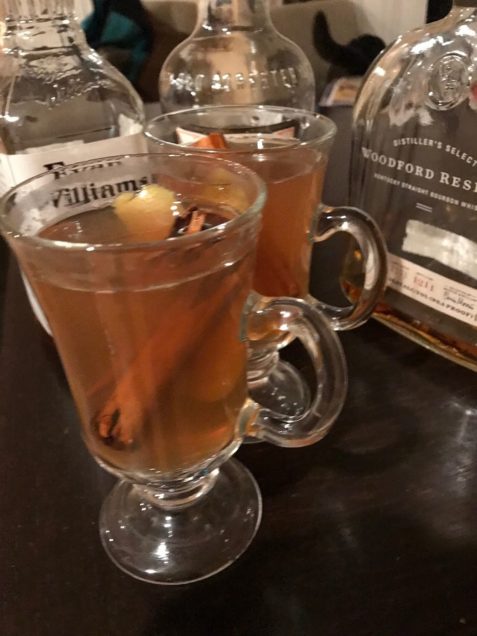 As I write this I am shivering in my approximately 65 degree home office and cat sanctum as the people of Los Angeles issue a collective “brrr.” followed by a hardy “WTF!.” The space heater located a foot behind me will soon be turned on and my electric bill will rise with the temperature. Yes, this native Angeleno is here to tell you that even townspeople who came here from the frozen tundra of the Midwest start to freak out just a little when the day time temperature doesn’t rise above 60 and the nighttime temps drop into the low 40s/high 30s for weeks at a time

Now, in our defense, our dry desert climate makes those temps feel significantly colder. Seriously. Just ask the shocked tourists on Hollywood Blvd. who are shocked to find themselves shivering in their t-shirts and shorts. This is not Hawaii. Even so, this cold snap is freaking everyone here out just a little, and one of my usual well chilled cocktails simply wasn’t going to happen. Heating drinks up isn’t nearly as pricey as cranking up the space heater an extra degree.

Toddies are actually a category of drinks that, somewhat like highballs, are mostly similar but can also allow for a certain amount of creativity. Most toddies consist of a spirit, sweetener, and hot water. Some also add lemon juice, but  I’m keeping things about as simple as they can possibly get because I’m lazy and I don’t have to. So, of all the spirits out there, why did I go with bourbon?  That’s easy, I had several brands, all high proof, at DOTW Manor, and I’m in pre-Oscar hibernation mode. So, here’s a nice but very simple recipe I’m stealing/adapting.

Heat water to boiling or very darn near boiling and put in the cup/mug of your choice. Dissolve your honey in the hot water, which might take a moment. Then, add room temperature bourbon, which should cool it down significantly (especially if the room is as cold as mine!). Add a lemon twist, if that’s your desire, and stir with a cinnamon stick, if you’ve got it. A spoon will also suffice very nicely if you don’t. Carefully sip, count your blessings, and contemplate the fact that there are still lots of people who are a lot colder than you are tonight in your town, wherever you are. Maybe consider doing something about it.

I tried this with a number of high proof bourbons, starting with the always reliable Woodford at 96.4 proof, 100 proof Old Forester and Evan Williams Bottled in Bond, as well as Fighting Cock Bourbon at a fierce 103. All were a sweet and boozy treat but, as you might guess, added a bit of alcoholic heat on top of the physical heat, especially (and not surprisingly) the one named after a pugilistic rooster. None were bad, though some were a bit strong, even for my taste. For whatever reason, the Evan Williams  worked  best and was easily the smoothest. (You’d have thought it would be the slightly lower proof and very smooth Woodford. Right?)

I really enjoyed this one, even if all that honey and bourbon added a bit to my waistline and probably didn’t do much good for my teeth. Even so, I’m now a bit sorry I don’t have any boring merely 80 proof bourbon around. I feel like some Basil Haydon or even some plain old Jim Beam might have been about perfect.