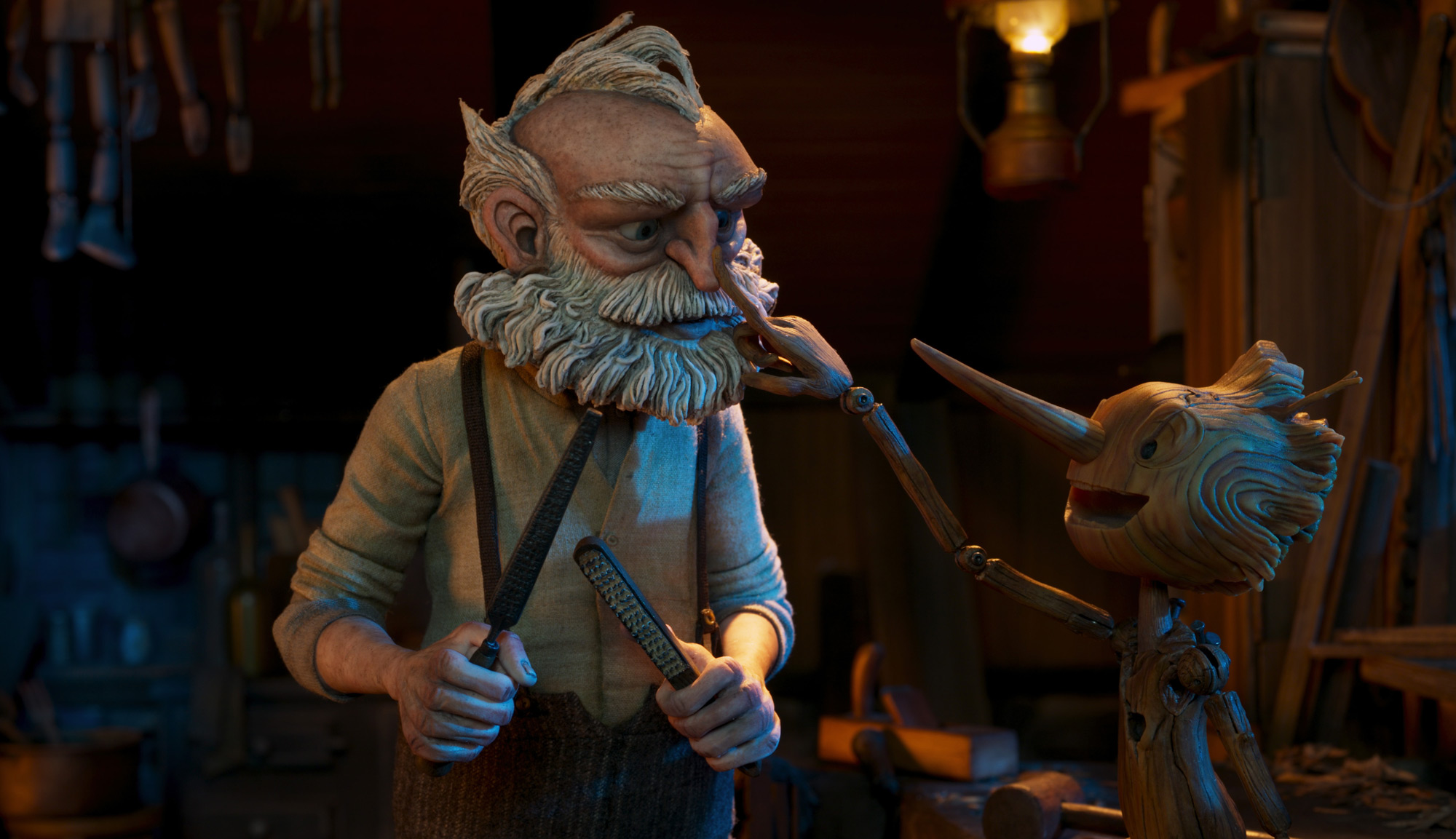 It’s rare, especially in the world of ever-expanding trademark and copyright protections, to see two adaptations of the same story released by two major directors for two major studios a couple of months apart from each other, but 2022 has given us just that experience with the release of “Guillermo del Toro’s Pinocchio,” hitting Netflix two months and one day after Robert Zemeckis’ version launched on Disney+. For del Toro, a character like Pinocchio seems almost too perfectly aligned to his sensibilities, offering a story that isn’t that far off from “Frankenstein, But for Kids” and an opportunity for him to recreate it in a style that he’s never used but is so well-suited for his aesthetic sensibilities: stop motion. The charm of stop-motion animation lies in how otherworldly it often feels — so regularly utilized to bring all manner of creepy crawlies to life by the likes of Henry Selick, Phil Tippett and the crew of artists at Laika. For “Pinocchio,” del Toro has brought in veteran Mark Gustafson to act as co-director, whose work in the stop-motion world dates back to 1985. Together, they have the opportunity to do something Disney and Zemeckis so utterly failed to do two months ago and make Pinocchio relevant again for modern audiences.

In general, the del Toro adaptation sticks to most of the same beats we expect from the Pinocchio story, though it spends a bit more time with Geppetto (David Bradley) and his son Carlo prior to his tragic passing, which is what leads to the creation of the wooden puppet in an attempt to repair the hole in Geppetto’s heart. A traveling cricket named Sebastian (Ewan McGregor) has taken up residence in a local pine tree, which Geppetto cuts down to craft the puppet that would be modeled after his son. After creating a rough sketch of the boy on the first night, a wood sprite (Tilda Swinton) arrives to give the wooden boy life, tasking Sebastian with protecting him and keeping his father/creator happy. But the newly named Pinocchio’s visage terrifies his father and the locals, including a fascist officer named Podesta (Ron Perlman), who demands that Pinocchio goes to school to civilize himself. Despite his best efforts, Pinocchio has a mischievous streak that puts him on a collision course with Count Volpe (Christoph Waltz), whose traveling circus is looking for a new keystone act. When Pinocchio begins skipping school, Podesta tasks Geppetto with tracking him down to escape potentially dire political and financial consequences.

Despite its PG rating, it’s safe to say that del Toro’s vision of the story is not nearly as kid-friendly as its Disney counterpart. Geppetto is essentially a depressed alcoholic for most of the movie, stumbling around and never finishing his design of the puppet due to passing out in a drunken stupor. The setting, moved from the 19th century to the early 20th century, is steeped in religious and authoritarian imagery, as the Fascist party has risen to power in the vacuum following World War I. The creation of Pinocchio is shot like a horror film, and the design of the wood sprite (as well as Death, also voiced by Swinton) that brings Pinocchio to life is both ethereal and covered in eyeballs in a way that immediately tracks it as a del Toro design. The second half of the film, with Pinocchio under Volpe’s thumb and Geppetto searching for him, is almost entirely about fascism, with the Pleasure Island sequence replaced by a child soldier indoctrination camp run by Podesta. It is, to put things simply, an extreme case of cognitive dissonance from the Pinocchio that has existed in pop culture for eight decades — the sort of approach that shocks the system and ensures careful attention.

Much of the weaknesses of this adaptation, though they are admittedly few and far between, can be laid at the feet of the choice to make it a musical. None of the songs are particularly catchy or engaging, nor do they offer some sort of deeper truth that couldn’t be replicated through traditional dialogue. It’s hard not to assume that the reason for making this version of the tale a musical is rooted in the original Disney version being a musical. And sure, considering Pinocchio’s performances in the circus, there’s likely to be some musical sequences, but that doesn’t mean they have to go whole hog down the musical route like this film does. Film score titan Alexandre Desplat wrote the songs in addition to the score (which, to be fair to him, is excellent), and I wouldn’t say a single one of them makes the grade. It’s especially tough having to live in the shadow of the classic songs of the Disney movie, which this film does whether del Toro and Desplat would want to admit it or not, and that makes the weaknesses of the songs even more glaring.

Regardless of some questionable choices here and there, there is no denying the visual wonder that del Toro and Gustafson have created here. Utilizing stop motion to tell the tale is a wonderful synergy of art styles; the skills of stop-motion animation overlap with puppetry so much that it’s almost the ultimate way to tell the story. And the designs of the characters and settings themselves often feel like they were carved from wood just as Pinocchio was. The performances (spoken performances, at least) are all top-notch, with David Bradley’s decrepit, old, mumbly Geppetto providing the heart and Ewan McGregor’s cricket providing the soul. The changes made to the story we know so well — both the Disney version(s) and the original text — create an often-surprising viewing experience, where you honestly don’t know where it’s going to go next despite being based on one of the most recognizable stories in the modern world. Put simply, the del Toro version of this tale has just the sort of thing that the Zemeckis film lacks: purpose, both in its storytelling and its animation style. Sure, it would be even better without the songs, but nobody’s perfect. That trademark del Toro imagination and artistic design more than make up for it.