Trending
You are at:Home»Entertainment»TV»TV Review: “The Guardians of the Galaxy Holiday Special” 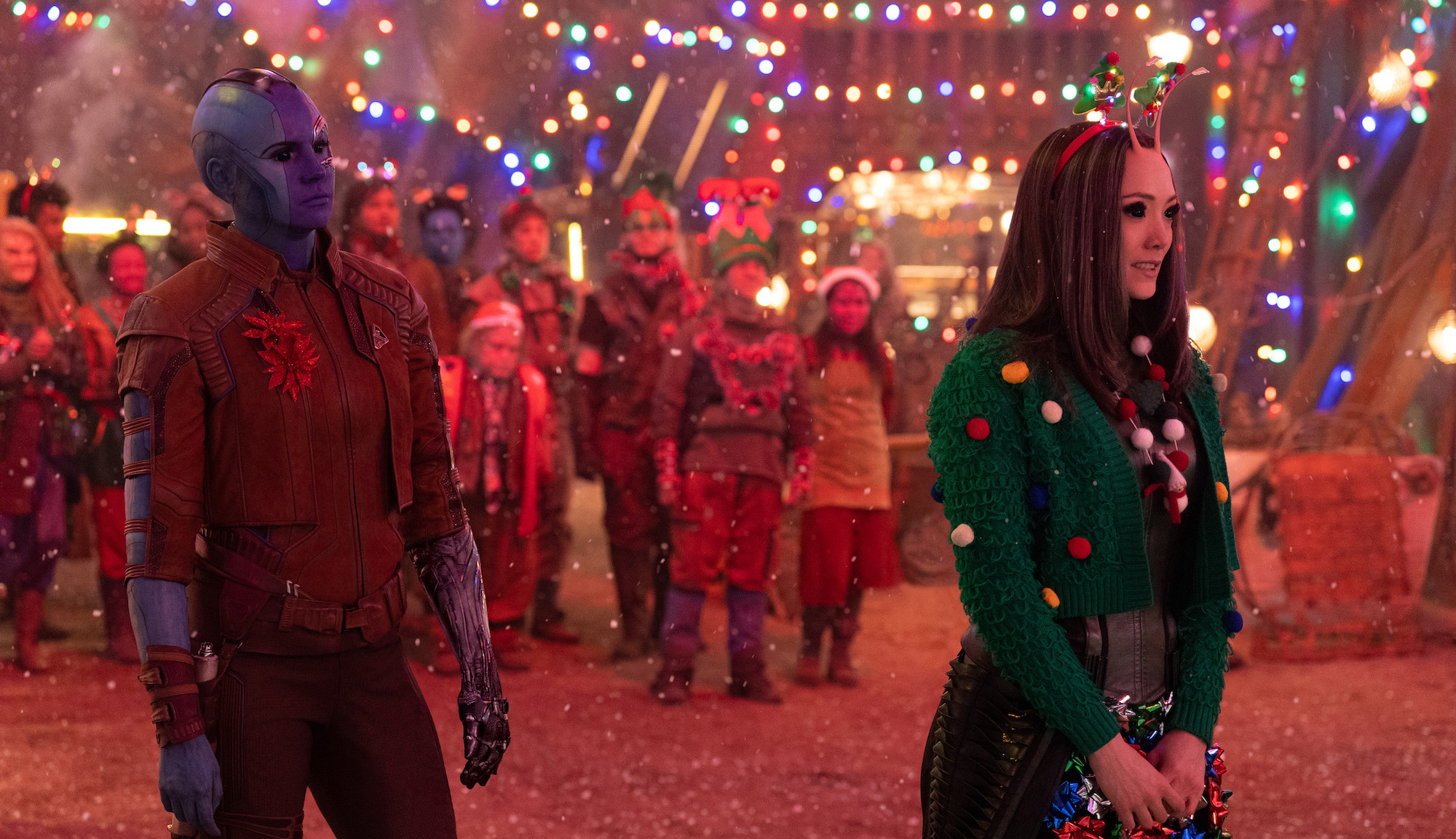 The throwback energy of “The Guardians of the Galaxy Holiday Special” is appreciated. In the 1970s and ‘80s, there were a plethora of tie-ins where franchises would churn out some Christmas special, complete with guests and musical numbers. This is how the infamous “Star Wars Holiday Special” was born with its “fun” Harvey Korman comedy bits, the debut of Boba Fett and some legitimately bonkers performances from Diahann Carroll. (Despite George Lucas’ best efforts, you can find this on the internet, and if you haven’t yet, you must seek it out and experience it.)

That is presumably the same spirit that drove writer/director James Gunn to revive his “Guardians of the Galaxy” story in holiday special form for Disney+, as it is also complete with a celebrity guest, musical performances, some MCU continuity information and more. The result is certainly better than those awkward cash grabs of yesteryear, but it’s still a fairly flimsy affair. It’s entertaining, with some genuinely funny and strong moments, yet ultimately forgettable; it feels more akin to some awkward parade float than a real filmed endeavor from the creator and stars of the blockbuster movies.

The Guardians are adjusting to life in their new home base of Knowhere (the Celestial head they visited in the first film), with Peter Quill (Chris Pratt) feeling especially down. Knowing that it’s nearing Christmastime on Earth, Mantis (Pom Klementieff) enlists Drax (Dave Bautista) to use the holiday as an excuse to cheer up their friend. They travel to our planet to get the best gift they can think of: Kevin Bacon (as himself). Hijinks ensue along with raucous musical performances and some assistance from Kraglin (Sean Gunn), Rocket (Bradley Cooper), a twentysomething Groot (Vin Diesel), Nebula (Karen Gillan) and Cosmo the telekinetic cosmonaut dog (Maria Bakalova).

There’s a great joke by Jon Stewart from his stand-up days where he talks about how all holiday specials are basically the same premise: “Oh no, Christmas is canceled… but wait!” In this case, Christmas is introduced to the aliens and then attempted to be “saved” for Quill, but the pattern holds true. Nothing about the plot is especially revelatory or unique, as is often the way with these things, but Gunn tries to find new wrinkles to make this offshoot feel slightly different than the stories that have been told countless times before. It’s also odd that the emphasis is on Christmas (although a very secular version of it), despite some handwaving attempts to make it about the winter holidays in general. This is what made “Life Day” a smart move by “Star Wars”; it was stupid and ignored most of the time, but at least it didn’t bring in religious affairs to purposefully ignore them.

The most curious thing about “The Guardians of the Galaxy Holiday Special” is that there are actually significant developments in the MCU narrative for these characters. Granted, it’s nothing that can’t be summarized in one line of dialogue in next year’s “Volume 3,” but it is notable that what could be seen as a piece of fluff includes these updates for the serialized storytelling obsessives.

The entire cast is certainly game for what is asked of them here. Klementieff and Bautista are given the most screen time and narrative focus, and prove that they’re very comfortable with their characters. These are far more comedic performances than in the previous “Guardians” appearances, with more outsized reactions to things, but the actors are clearly having fun and are willing to go along with the more cartoonish aspects. Bacon alternates between natural and broad (which is apt considering some of the events of the story), but he continues the feeling that everyone is having fun. Sometimes that can be grating, especially when the fun that the cast and crew had making the special doesn’t translate to fun for the audience, but it’s mostly endearing and infectious.

One of my biggest complaints about the special is that, despite probably using the same cast and crew and being an in-continuity special extension of the multibillion-dollar MCU, everything looks much less expensive. Not cheap, per se, but definitely on a much tighter budget. The weirdest part of this cost restriction is found in two animated segments (acting as flashbacks) that look inferior to the usual animation. This is peculiar given the fact that it’s Disney — a company founded on animation. If anything should shine and impress, it should be these moments.

As with other “Guardians” ventures, there are a plethora of pop music cues, though it’s all holiday music. It’s weird to have The Pogues’ “Fairytale of New York” introduce this on Disney+, but we live in strange times. Some of those needle drops are intrusive (I didn’t know The Smashing Pumpkins had a Christmas song, so that was surprisingly distracting), but most continue the general gleeful sense of fun that permeates so much of this special. The actual performance by The Old 97’s is pretty funny, while the ditty by them and Bacon is middling at best.

“The Guardians of the Galaxy Holiday Special” is a fun enough confection that is breezy and fine for what it is. It’s not essential viewing by any means, but it’s certainly better than the usual fare, even though it still suffers from a lot of the weaknesses of those old holiday specials with their convoluted plots and forced merriment. The special benefits a lot from a cast and crew that are sincerely approaching this like it was a regular entry, and the soundtrack makes for a pretty cool Christmas mixtape. There are much worse ways to spend 42 minutes this holiday season, but there’s nothing of real substance here that will linger much past the mid-credit scene.