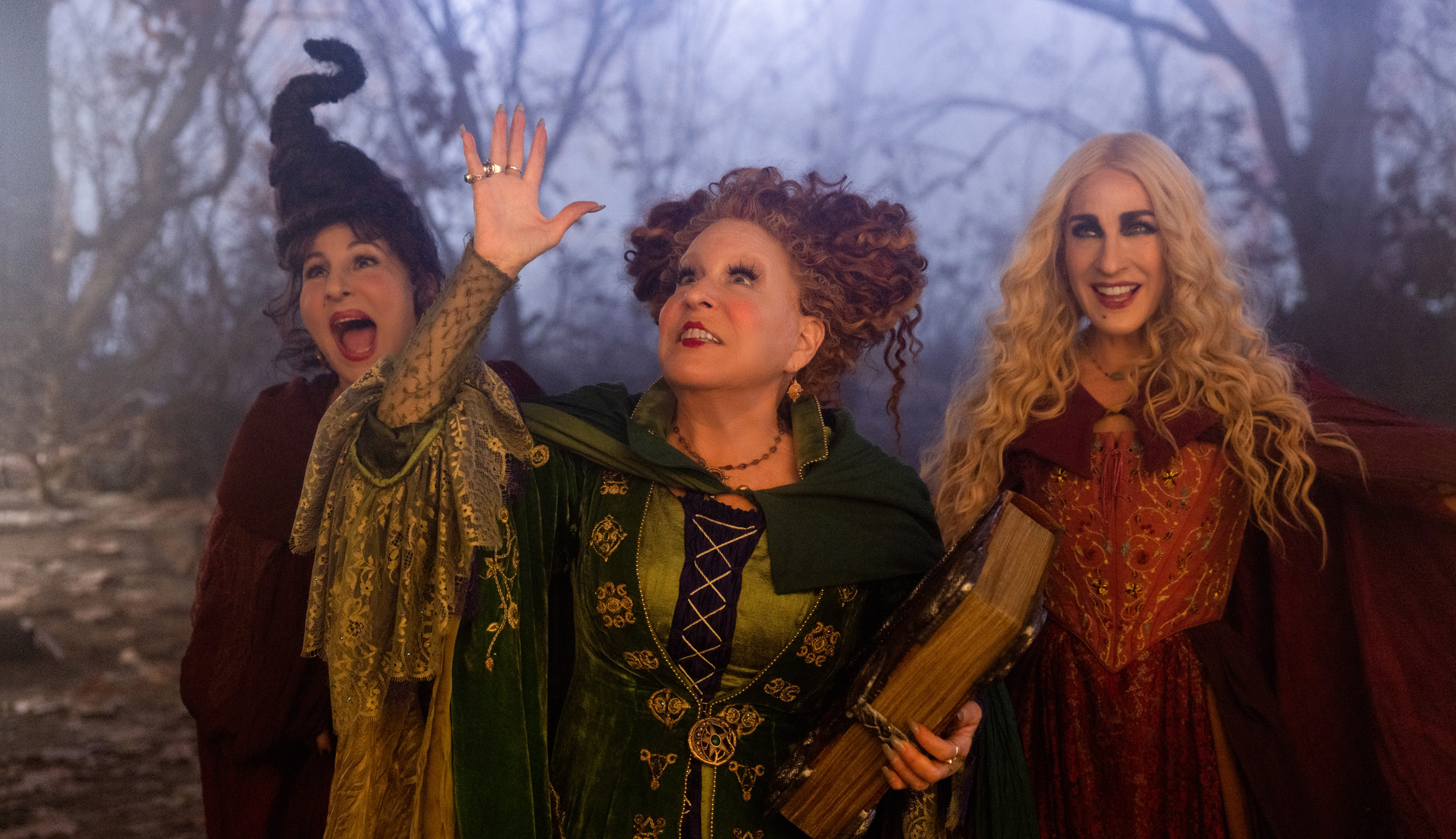 For those wondering why “Hocus Pocus 2” is being released on Disney+ as opposed to theaters like its predecessor, it’s for the exact same reason why the movie’s pandering is divided and thus ineffective: its biggest audience is the older fans who are nostalgic for the original, while the crowd that would bring in the most money at the cinema (presumably preteen to teenage girls) need a good reason to see it. That creates a risky gambit because the older crowd isn’t going to put up big box office numbers while the younger crowd won’t have the same enthusiasm for the property. Nevertheless, “Hocus Pocus 2” tries to appeal to those two disparate groups in confounding ways and leaves behind a muddled mess of a movie.

The film follows two teenage girls, Becca (Whitney Peak) and Izzy (Belissa Escobedo), as they accidentally bring back the Sanderson sisters (Bette Midler, Sarah Jessica Parker and Kathy Najimy) to modern-day Salem with the help of a magic store owner (Sam Richardson). Now, they must team up with their estranged pal Cassie (Lilia Buckingham) to stop the witches’ plot to gain power and become unstoppable.

Directed by Anne Fletcher (from a script by Jen D’Angelo), “Hocus Pocus 2” is full of callbacks to the 1993 original, even going so far as to double-down on several of them. Clearly, the philosophy is, “They liked this in the first one, so let’s give them more of that.” But too often, it’s not something being done in the same spirit as the first movie but rather more of that exact thing. Remember those couple of scenes where the Sanderson sisters walked in that funny way together? Well, now there’s a handful of those. Remember that time they had a musical performance in the middle of the film? Well, now there are three musical performances (including one over the end credits in a recording booth, for some reason). And wasn’t it funny when Mary flew on a vacuum cleaner instead of a broomstick? Well, now she rides on Roombas. There’s even a part in a musical montage where people are literally watching the original “Hocus Pocus.” It’s meant to be a sweet tribute to the departed Garry and Penny Marshall, but it simply breaks reality even further and comes off as a clumsy gag.

While there’s certainly a place for these types of fan service films, the scenes that mirror and mimic its ‘90s counterpart is only half of the movie. The other half is a story of young women discovering their own power and the power that stems from their close friendship as they grow up and discover the world. This is complete with a lunkhead boyfriend (Froy Gutierrez) to stir up the mix, bad tween-speak humor and lots of broad reactions to the supernatural shenanigans of the Sanderson sisters. This is perfect for the younger Disney crowd who have a vague idea of what high school is about but haven’t really experienced it yet for themselves, but it doesn’t blend well with the constant nostalgia and winking fan service. They are two bland tastes that taste even worse together.

It’s all made worse by the fact that “Hocus Pocus 2” looks like a made-for-TV Halloween movie from the late ‘90s. Whatever lighting, camera or digital film processes were used renders it into a flat, cheap-looking affair. There’s a dance sequence (which prompts a reference to a “flash mob”) that would work really well on screen if it didn’t look like a deleted scene from a “Halloweentown” sequel. Similarly, the CGI is uninteresting and awkward — probably the worst substitute for the nice practical effects of the 1993 original. This is frustrating because there are moments (particularly the opening sequence that takes place in 17th-century Salem) that look like a real movie. Clearly, quality was possible but ultimately abandoned — another example of the internal disparity of “Hocus Pocus 2.”

Granted, it’s not a complete wash. Besides those few sequences just mentioned, there are some genuinely funny moments and jokes that land well. Even the Roomba gag, which starts terribly, eventually gets funny as they become sentient pets. Most of the true comedy comes from side characters like Tony Hale’s mayor or Richardson’s shopkeeper, but all the characters get in at least one truly funny line. The teen actors are broad in their delivery, but it’s so uniform that it had to have been Fletcher’s decision to go that route, while Midler, Parker and Najimy effortlessly slip back into their roles and do their best with the middling material. None of the adult actors phone it in despite everything about the project suggesting they should.

1993’s “Hocus Pocus” has become a beloved spooky season stable over the past nearly 30 years with its original approach, strong writing and inclusion of (safe) horror elements. Its sequel forgets these things and simply tries to copy its predecessor’s homework, resulting in a pretty flawed reproduction. When it goes for something new, its heart is in the right place, but the writing is too flimsy to work well. “Hocus Pocus 2” is a long-gestating project that seeks to serve old and young audiences alike but only manages to fail both equally. To quote another spooky season favorite, when it comes to decades-late sequels to beloved properties, “Sometimes dead is better.”