Trending
You are at:Home»Entertainment»Movies»Movie Review: “Pinocchio” 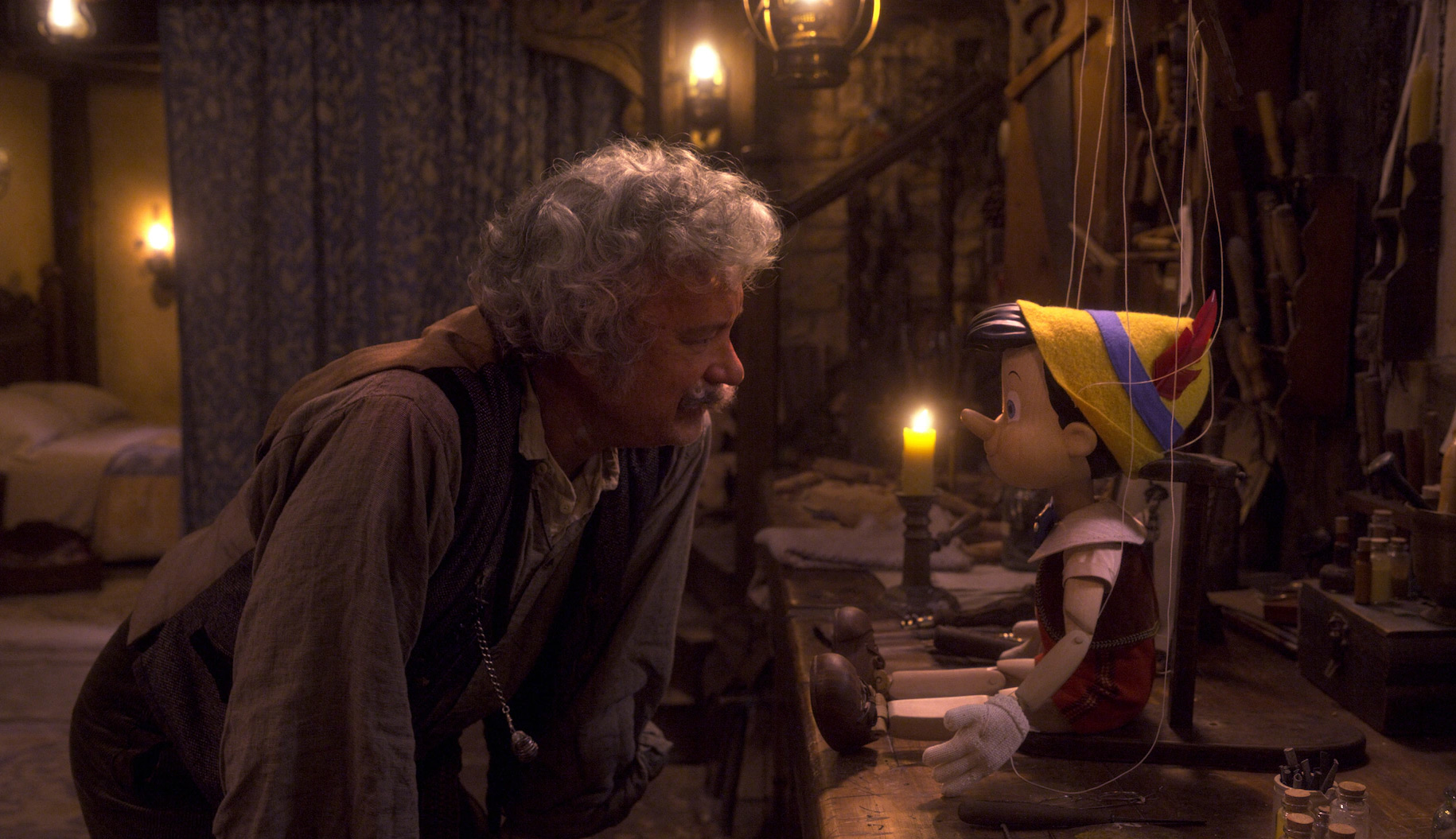 Time has marched forward, the sun has made its way across the horizon on a day that ends in “y,” and Disney has made yet another live-action retelling of one of their classic animated features. Since Tim Burton’s “Alice in Wonderland” made obscene amounts of money at the global box office, the biggest movie studio on Earth has begun greenlighting more and more new versions of old tales, nearly all of which have continued to pay dividends. With the launch of Disney+ in 2019, the need for new content has become insatiable, and their latest entry once again weds Tom Hanks and director Robert Zemeckis to reimagine the studio’s second feature, “Pinocchio.”

In this new version of the classic tale, pretty much the exact same things happen, with most of its changes focused on sanding down the less acceptable aspects of the 1940s. The largest change is centered around a brand-new character, Fabiana (Kyanne Lamaya), who works for Stromboli’s traveling puppet show and provides the film’s one new song. She has a bum leg and a dancer’s soul, and lives vicariously through her ballerina puppet who duets with Pinocchio, thus giving us another. Beyond that, the other adjustments are designed to make things more palatable to kids today. Instead of smoking cigars and drinking beer, the kids imbibe root beer and tweak out on sugar.

What does fall solely on the shoulders of the venerated director, though, is the unceasing parade of CGI that at times makes this barely feel like it’s happening in any sort of real world at all. Undeniably, there are aspects of an animated film that cannot be recreated in a live-action world without the intervention of computer-generated effects, especially when it comes to these Disney remakes that are so dependent on nostalgia. It’s okay to change things. They could have found real cats to play Figaro, and we don’t need the uncanny valley of a goldfish with giant eyelashes and lipstick mugging next to Tom Hanks and his giant bushy mustache. Hell, Zemeckis can’t even have Lampwick blow foam off his Pleasure Island root beer without making it an effects shot.

There was a time when his mastery over this was unparalleled, whether it was the seamless marrying of real and cartoon life in “Who Framed Roger Rabbit?” or the body-horror slapstick of “Death Becomes Her.” He’s become more and more reliant on this approach in his later years, and when you combine that with a Disney machine that has become infamous in the industry for churning out as many effects shots as possible without necessarily worrying about quality, you get this — a film that feels far less real with its flesh-and-blood actors on real sets than its entirely hand-drawn predecessor.

It’s no secret that Disney attempts to placate too many masters with its remakes of beloved animated properties. The studio is driven by nostalgia to bring its old stories to a new generation of kiddos but with a little less racism and smoking (though some of the Italian stereotypes on display here are… not subtle), as well as to jazz it up with modern sensibilities and star power. It’s possible that it could work, but it’s an approach with a high degree of difficulty. Most attempts to modernize a movie made in 1940 based on a book written in 1883 end up eliciting groans; it simply doesn’t match the setting and tone.

Joseph Gordon-Levitt’s take on Jiminy Cricket is where we feel this pain the most; his characterization is far more jocular in nearly all cases, and he’s often the source of the more egregious attempts at modernizing the script. It’s not just him, either. Keegan Michael-Key’s Honest John coaxes Pinocchio to the dark side with promises of becoming an influencer, which feels comically anachronistic in a world where Geppetto lights his workshop with candles. And, for reasons that don’t seem to make a whole lot of sense, Monstro has been changed from a fairly straightforward sperm whale into a tentacled eldritch monstrosity for one chase that serves as the climax of the action. These changes amount to little in the grand scheme of things, mostly just calling attention to everything that stays the same. But of course, that’s the goal. Changing too much is not an option, as it would rock the boat a bit too much.

In the age of streaming, where quantity trumps quality and volume is king, these films don’t even need a big box office to justify their existence. They just need to be there — to be another new thing they can boast about in an attempt to keep a few more people from canceling their subscriptions for another month. I can’t imagine anyone really cares all that much about a Robert Zemeckis adaptation of “Pinocchio” in 2022, but throw in Hanks and Gordon-Levitt, and maybe it might make some folks think twice about moving on for greener streaming pastures.

The fact that this “Pinocchio” is as bad as it is seems to be neither here nor there. Pinocchio looks like he did in the original movie, and Tom Hanks plays Geppetto, and that’s basically all you need to press play. It doesn’t matter that this new version of the film offers nothing to anyone (especially considering the original, and far better film, will be sitting right next to it on the same streaming service), as it’s just another entry in an increasingly cynical line of updated classics that are doomed for failure due to the need to slavishly adhere to what came before it. Sure, the likes of Gordon-Levitt and Cynthia Erivo can sing the famous songs well, but what does that actually get us beyond a temporary folly? For those of us invested in the power of art, its commodification in films like “Pinocchio” is a huge bummer. Here’s hoping that Guillermo del Toro’s own take on the source material, which is due out in a scant few months, actually has something of interest to say. I don’t think that’s too much to ask.