Trending
You are at:Home»Uncategorized»Drink of the Week: The Deshler 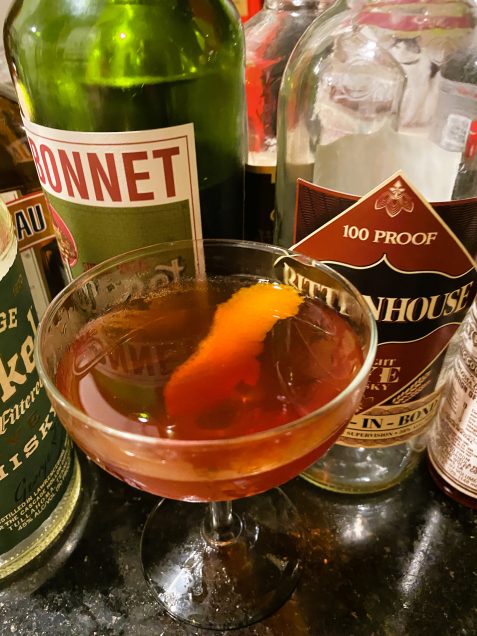 A recent Liquor.com article tells us that the Deshler goes back to what might be the last cocktail book published before the launch of U.S. prohibition, 1917’s Recipes for Mixed Drinks. While Liquor.com credits its updated recipe to New York Tiki specialist Brian Miller, I found a very similar recipe in Robert Hess’s The Essential Bartender’s Guide, which has certainly been essential to this never-ready-for-prime-time mixologist. (I take about 5-10 to make a drink for one person. I’d be fired by any sensible bar within 15 minutes — unless they wanted to keep me on as a paid in-house know-it-all, which remains my dream occupation.)

Although the identity of Deshler remains a mystery – human or beast, I know not – the drink is worth your time especially if you’re a fan of both whiskey and Dubonnet, the beloved tipple of Queen Elizabeth II. It’s yet another variation of a Manhattan and, while it’s not worse than the others I’ve looked at this year, it only really took off on my final try when I made one change that’s arguably not a change on one side of the US/Canadian whisky border.

Combine all of the liquid ingredients in a mixing glass or cocktail shaker – preferably not a very large one. Next, take the lemon twist and one of the orange twists, express the peel over the liquid, and drop it in. Do the same thing with one of the two orange twists. Add lots of ice and stir very vigorously. Strain into a chilled cocktail glass. Add the second orange twist to the drink as a garnish.

Since the Deshler recipe is very specific about the brands for everything but the base spirit, I didn’t mess around much. Dubonnet is similar to vermouth though a bit subtler in its bittersweetness; throwing in the king of triple secs, Cointreau, adds some essential sweetness as well as an orangey bitter edge. Then there are all those citrus peels thrown inside the mixing glass, which may be Robert Hess’s addition and I think a very good one. The expressed oils from the peel add some freshness.

It was the rye whiskeys where I was able to experiment, sending two bottles to their recycling afterlives. Rittenhouse’s 100-proof bottled-in-bond was a hardy base spirit that might be a little too hardy for some in the Deshler. George Dickel’s rye made for a gentler cocktail and was probably just hardy enough. Having run out of those two brands I decided to give Canadian Club a 9-Year Reserve a shot. As I’ve mentioned a few times this year, the U.S. is much stricter about what whiskey can legally be called rye than Canada. Thus, what we call Canadian Whisky is marketed as rye in Canada. In any case, this not-rye-rye allowed the drink room to breathe for a more balanced, smoother, and refined drink.